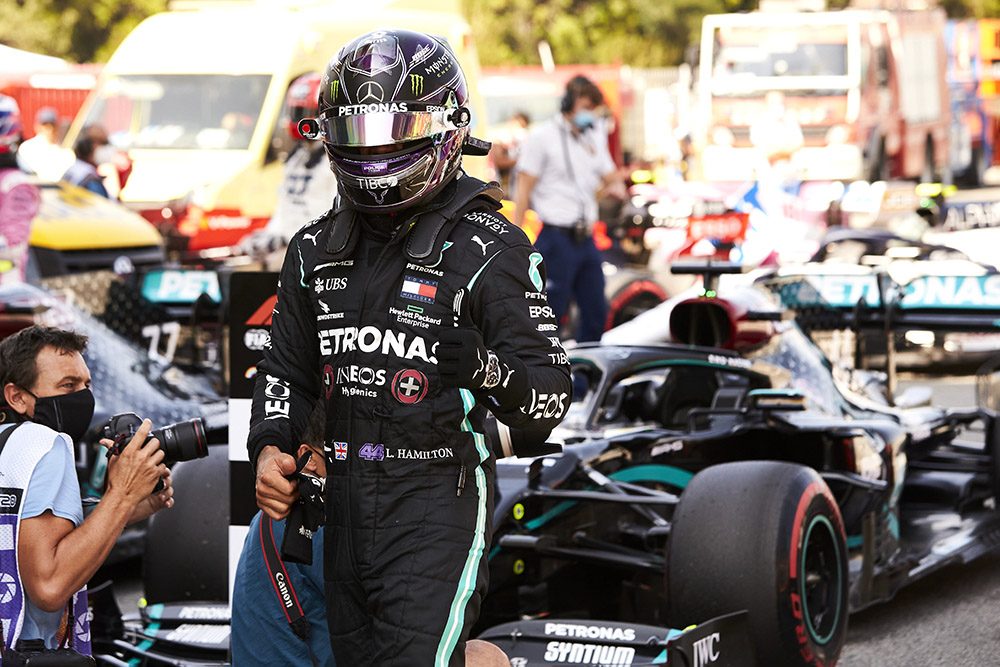 The Circuit de Barcelona-Catalunya is an ideal off season testing circuit for the Formula 1 but last nights Grand Prix left fans wanting so much more with Mercedes AMG F1 team’s Lewis Hamilton romping away with the win over Red Bull Racing’s Max Verstappen and Valteri Bottas.

Any why race at a track where overtaking’s difficult? Be like playing football in a stadium where you can’t score goals.

Lewis Hamilton made the ideal start from pole position and stayed wide on the approach to turn 1. Teammate Valtteri Bottas was under Siege from Lance Stroll on his inside and Max Verstappen in the middle of the track. Hamilton and Verstappen swept into first and second as Stroll squeezed Bottas out of third.

Things went from bad to worse for Bottas in the opening corners as a half move from Albon left the Mercedes driver susceptible to a move on the inside from Perez. Bottas fought back to re-take the place at turn 3. Leclerc, Norris, Vettel and Ricciardo fought amongst themselves on the edge of the top 10.

Hamilton held a 1.5 second lead at the end of the opening lap from Verstappen, Stroll, Bottas, Perez, Albon, Sainz, Gasly, Leclerc and Norris. Bottas finally moved ahead of Stroll down the pit straight with the aid of DRS at the start of lap 5.

By lap 10 the soft tyre had begun to show signs of deterioration on some cars, with Carlos Sainz declaring a loss of grip with his softer rubber. Hamilton’s lead had stabilised at around 1.3 seconds from Verstappen, with Bottas a further 1.5 seconds behind. Hamilton’s tyres had lasted well enough for the leader to record a fastest lap of 1:23.618 on lap 11.

Albon became the first of the front runners to stop on lap 18 and switched to the hard compound tyre. Teammate Verstappen stopped on lap 22 with the medium compound tyre bolted to the car in just 1.9 seconds. He emerged from the pits in 3rd, a second clear of Stroll. Gasly, Norris and Kvyat also stopped on the same lap, which saw Ricciardo temporarily leap into 9th place. Hamilton held an 11 second lead when called into the pits for medium tyres on lap 23. The Mercedes team narrowly avoided a double stack with Bottas when an issue with the left rear delayed the race leader’s stop.

By lap 25, Lewis Hamilton led Max Verstappen by 3.882 seconds, with Bottas, Stroll, Perez, Leclerc, Vettel, Ricciardo, Magnussen and Ocon in the Top 10. Stroll stopped on lap 28 and was fortunate to stay ahead of the battle between Ocon, Magnussen and Albon for 9th place. Ricciardo continued to climb up the leader board as those ahead made their first stops and had the Renault into 4th place on lap 31.

Both Renaults ran longer first stints than anyone else which placed them in a battle for position with faster cars on fresher tyres. Ocon found Norris and Leclerc nipping at his heels as the Mercedes driver tried to pass the Renault while also trying to fend off the Ferrari. Ricciardo dropped to 13th and Ocon 17th when they finally stopped for soft tyres around lap 37.

Charles Leclerc’s hopes for a trouble free race vanished on lap 38 when a mechanical issue saw the engine cut out and lock the rear wheels into a spin and stop at turn 15. He eventually managed to reset the car and limp back to the pits and eventually retired from the race.

Arghh, Top 5 was on the cards today. Unfortunately, the car switched off in the last chicane. We’ll investigate where did the issue come from. Positive race otherwise but still far from where we want to be. Onto the next race 🔥 pic.twitter.com/vl92RrkkIW

Verstappen made a second stop for medium tyres on lap 42, which gifted second place to Bottas, some 12.4 seconds behind Hamilton and more than 55 seconds ahead of Stroll in 4th. Norris was another to make a second stop for medium tyres on lap 46 and returned in 11th place behind Gasly. The combination of heat and a long race began to take its toll on the driver-engineer relationship. Lewis Hamilton disagreed with the suggestion that he stop for the soft tyre and argued for another set of mediums, then stayed out on track. Sebastian Vettel had risen to 5th when asked by his engineer if he was happy to stay on the soft tyre to the end of the race.

“We talked about this before,” came the reply from a frustrated Vettel. “I can do that. I can try, there is nothing to lose,” he eventually added in a second message.

Bottas stopped on lap 49 for the soft tyres and lost 2nd place to Verstappen in the process. Hamilton was then told to box on the following lap only to ignore the call.

“I don’t want to go on the soft tyre, what would you want to put me on that,” he explained. “This tyre’s fine, don’t put me on that.”

Hamilton stopped on lap 51 and was given his preferred choice of the medium compound tyre. He resumed in 1st place 9.6 seconds clear of Verstappen and a further 6.9 seconds ahead of Bottas. Perez, Vettel, Stroll, Sainz, Albon, Gasly and Norris completed the Top 10 runners.

Vettel slipped back as his soft tyres gradually gave up their grip and dropped behind the Racing Point cars. By the final lap of the race he was barely ahead of a five car battle with Albon set to challenge for 7th place.

Lewis Hamilton cruised to a 24 second victory over Max Verstappen and broke the record for most podium finishes in Grand Prix history. Bottas claimed 3rd from Perez, who subsequently dropped 6th after a 5 second penalty for ignoring blue flags. Stroll was elevated to 4th, with Sainz 5th. Vettel hung on to take 7th from Albon, Gasly and Norris, while Ricciardo just missed out on the points in 11th place.

“I was in a different zone then,” Hamilton reported to his team on the cool down lap. “I didn’t even know it was the last lap. Awesome, thank you so much guys, set up was awesome today” he added.

“It felt really good,” Hamilton told Martin Brundle during the winner’s interview. “Fantastic effort from the team, it was hot out there today. It was a real surprise because we had the problem with the tyres last week. Management of the tyres was very good and I think that was what we understood from last weekend was brought here for this weekend and enabled us to do what we did today… I think at the end there was no need to take the risk of going onto the softer tyre.”