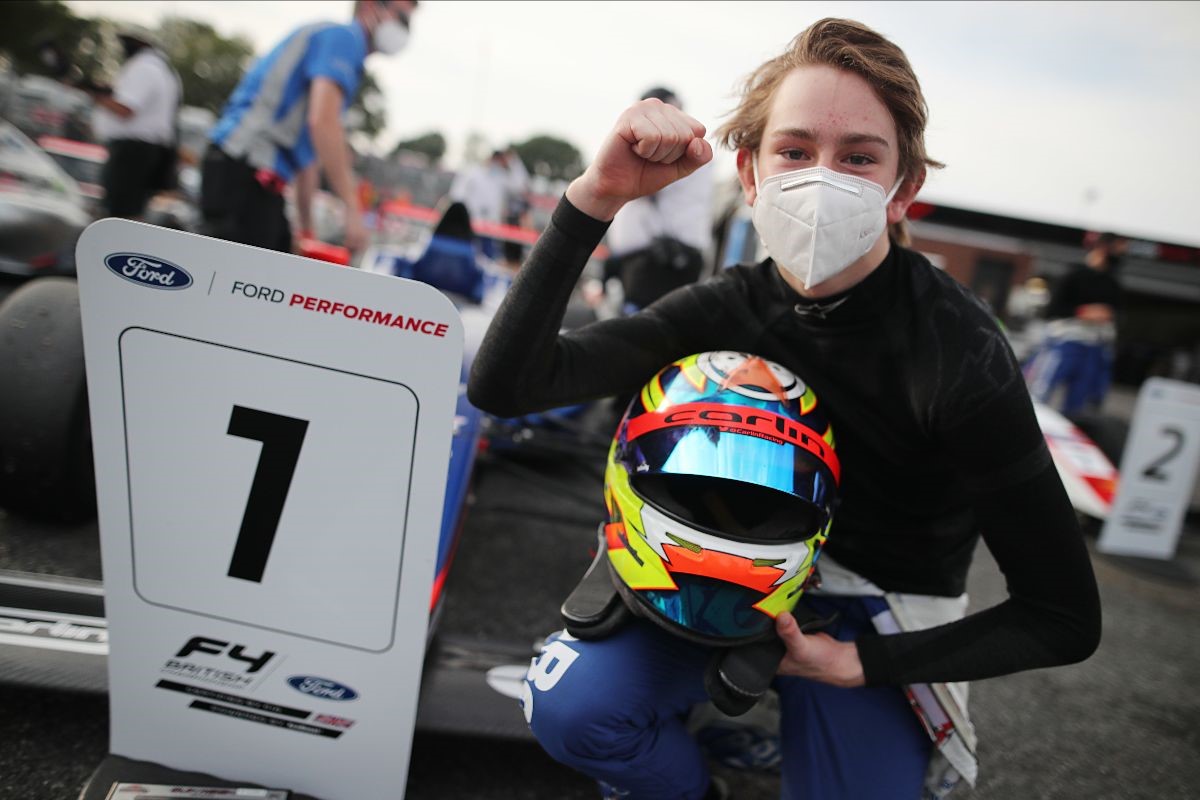 Christian Mansell produced a flawless performance at Brands Hatch this past weekend (August 8/9) to score a sensational maiden victory in the F4 British Championship certified by FIA – powered by Ford EcoBoost.

Having showcased his potential at the Donington Park season-opener, the Australian driver took centre stage around the Grand Prix layout to also clinch a trio of Rookie Cup wins and pick up the £5,000 Ford Super Rookie Award, presented to the first Rookie Cup entrant to win a race outright.

Battling the searing temperatures as well as his single seater rivals, the Carlin driver kicked off his weekend by setting the eighth best time in qualifying. Had it not been for a lift on an even faster lap late on in the session, the 15-year-old may had been even higher on the grid.

Race one proved to be a relatively tame affair for the AJM Transport, Castrol and Vawdrey Trailers backed teenager. Pulling off two exemplary overtakes on Roman Bilinksi and Casper Stevenson, Mansell progressed up the order to take the chequered flag in sixth.

Starting from reverse grid pole position in race two, the New South Wales-based driver didn’t put a wheel wrong as he powered his way to an impressive lights-to-flag triumph in just his fifth British F4 race.

Making a rocket start, Mansell converted his front row start into a commanding lead and from there he never looked in trouble, managing a comfortable gap to Roberto Faria throughout the race to ultimately claim victory by over half a second.

Lining up ninth for the third encounter – which was broadcast live on ITV4 – the Infinity Sports Management, Rush Performance, IOR Petroleum, AW Performance and AMSL Diabetes Australia backed ace capped off his weekend with another stellar drive.

Jumping into eighth on the opening lap, Mansell ran in that position for a majority of the race before moving into seventh on the final lap after unfortunate contact with Abbi Pulling.

Virtue of his stellar weekend at Brands Hatch, Mansell has moved up to fifth in the overall Drivers’ Championship whilst he now leads the Rookie Cup standings, holding a 27-point advantage.

Christian Mansell: “What an amazing weekend – I’m over the moon to have claimed my first British F4 win! I have to thank everyone at Carlin, all my loyal sponsors and of course my family – without any them this wouldn’t have been possible.

“After my debut at Donington Park I was confident that we could be in the mix this weekend. Finishing sixth in race one was a solid start and it obviously set me up to win race two as I was on pole position virtue of the reverse grid.

“I managed to make a rapid start and once out front I was able to get my head down. The tyres began to fall away towards the end of the race but the car was unreal and I was able to continue to push all the way up to the chequered flag.

“Finishing seventh in race three was the cherry on top of a fantastic weekend. To score my first-ever overall victory, win the Rookie Cup in all three races and pick up £5,000 for the Super Rookie Award is incredible and hopefully we can carry this momentum into Oulton Park.”

Oulton Park provides the next stop on the calendar for the F4 British Championship certified by FIA – powered by Ford EcoBoost, with three races scheduled to take place on August 22/23.