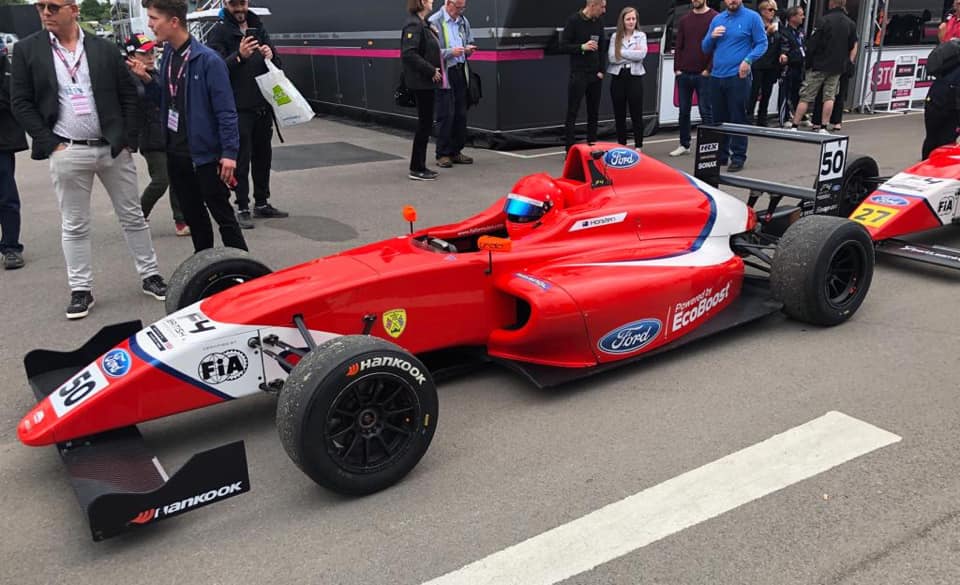 Aussie Bart Horsten took a podium finish for Arden Motorsport at Round 3 of the British F4 Championship at Thruxton last weekend, as Alex Connor took a brace of Rookie Cup Podium results and Tommy Foster took a pair of 4th place finished for the team.

Thruxton hosted Round 3, Races 7-9 of the 2019 British F4 Championship – at the fastest circuit on the calendar.

Qualifying saw Tommy set the 3rd fastest time, just 0.080s off pole position. Teammates Bart and Alex set the 8th and 10th fastest times respectively, which is the positions where they would start Race 1 of the weekend.

Tommy made a good start to vault into 2nd place at the start of the race, as the field ran down the hill and into Turn 2. He battled hard with Richardson Racing’s Luke Browning, as the pair had a titanic duel into the chicane, which saw both driver’s show respect and bravery – despite Tommy dropping to 3rd position.

Bart and Alex both gained two positions each to move into solid points paying contention early on in the race, before the Safety Car was deployed for a few laps.

The restart was a little messy, as Bart ran wide at the final corner, causing Alex to take avoiding action to prevent running into his teammate and dropped a couple of positions.  An incredible battle for the podium spots erupted in the closing stages, which saw Bart claim 4th at the chequered flag, Tommy finished 7th and Alex finished in 9th position – meaning all drivers scored points in a hectic opening race.

Race 2 saw Bart start from 2nd on the in the partially reversed grid race and make a great start to lead the pack down the hill for the first time.Tommy and Alex ran in 7th and 11th in the opening laps, before Tommy pulled off a great switchback move on the exit of the chicane at the start of Lap 3 to move into 5th.

A brilliant battle at the front for the lead ensued, with Bart and Tommy fighting for the podium. Bart dropped to 3rd position and Tommy was involved in an incident with Luke Browning – causing damage to Tommy’s car into Turn 3 and forced him into the pits for repairs.

Bart held on brilliantly to 3rd position to take another podium finish for the team. Alex made up good progress to 7th at the chequered flag and another Rookie Cup. Tommy crossed the line in 11th, just missing out on a point scoring finish despite the damage from earlier in the race.

The third and final race of the weekend saw Tommy start from Pole Position, after setting the quickest 2nd best lap in Qualifying. Bart started from 13th and Alex started from 10th on the grid. Tommy maintained 2nd on the opening lap of the race and in pursuit of new leader Zane Maloney.

Bart and Alex had a challenging opening lap, becoming detached from the leading 7 due to an incident in the midfield – running in 9th and 10th respectively. The pair were elevated up a place when Luke Browning had a half spin at Turn 1 on Lap 5, while Tommy remained in the tow of Zane Maloney.

The Arden trio-maintained position into the closing stages, before Tommy came under attack from the Double R pair behind him. Tommy finished the race in 4th position, just missing out on a podium finish. Bart recovered to a solid 7th position and Alex completed the points scoring positions in 10th – claiming his 2nd Rookie Cup podium of the weekend.

“Thruxton was another strong weekend of points scoring and has put me 4th in the championship standings and slightly closer to the lead than I was after Round 2 in Donington,” Bart told Velocity Magazine.

“Although it was great to get another podium with a P3 finish in Race 2, I would have really liked to bring home the win for the Arden team in that race.”

“I’m really excited about my chances going into the next round at Croft and with two full days of testing in the week prior to the event, I believe we can have a really strong showing there.”

MEDIA RELEASE/WEC - Photo: supplied Round four of the FIA WEC, the 24 Hours of…

GPX RACING SUFFERS A RETIREMENT IN THE 2021 24HRS OF SPA

MEDIA RELEASE/GPX Racing - Photos: supplied (Antoine Truchet) The most competitive Porsche in the 24…