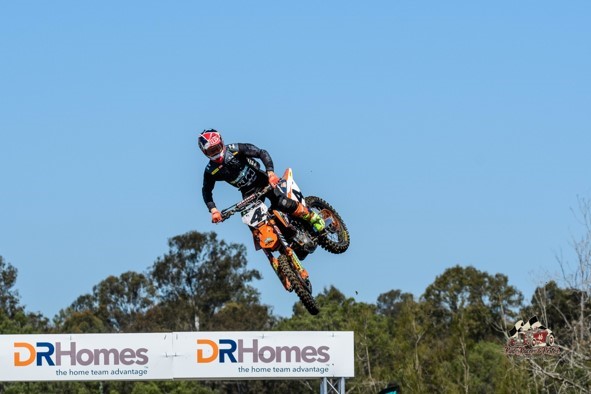 A cast of Aussie riders are set to take it to American ace Justin Brayton as Round 2 of the Australian Supercross Championship heads to Coolum this Saturday.

With Brayton leading the way after winning Round 1 in Jimboomba, three Australians still remain hot on his heels in the chase for the championship.

One rider looking to topple Brayton and ensure the Australian Supercross Championship lands back in Aussie hands for 2018 is New South Welshman Luke Clout, who currently sits third in the rider standings.

“I’ll just need to get a good start and be with him, he’s [Brayton] a really good rider who seems to step it up when you think you’re getting closer to him,” Clout said.

“I think I can definitely stay with Justin, It will be another thing to beat him but I think it’s realistic to be there and fight with him for 20-laps and take it to him cleanly.”

Despite this being his first year on a 450 bike, Clout says he’s feeling especially confident on the more powerful Factory KTM 450-SXF and is feeling confident he can push for the win in Coolum.

“I’ve really felt comfortable since day one riding the KTM in Supercross, we’ve done literally one day of testing and haven’t changed anything since, the more time I’m spending on it the better I’m getting and more comfortable I’m getting,”

“I feel like I’m riding a lot better than I was at Jimboomba, I feel like I’ve picked it up again. I’m really happy with how I’m going with my fitness and how everything with the team is going, so yeah just really excited to go back racing.”

Round two of the 2018 Australian Supercross Championship at Coolum Pines MX complex on October 6 will be staged as a daytime meeting, the new family-friendly daylight format being popularly received at the Jimboomba championship opener.

Gates will be open from 10am, with a Pit Party kicking off from 1.30pm where fans can meet the stars of supercross, and main event racing roaring into life from 2.30pm.

TROPHY, CASH PRIZE UP FOR GRABS AT SYDNEY SUPERCARS QUADRUPLE-HEADER