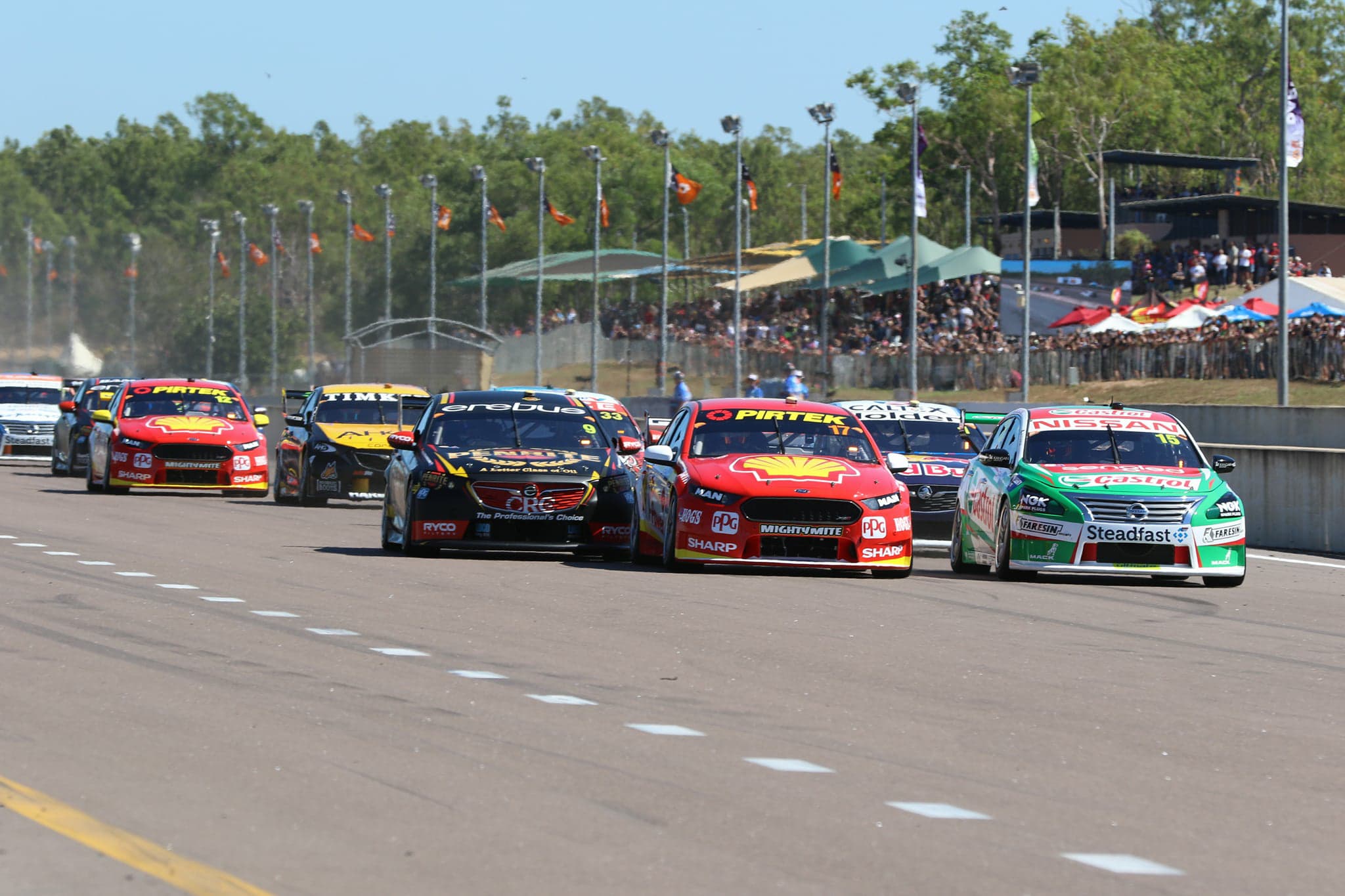 David Reynolds drove literally drove around his rivals to claim victory in race 16 of the 2018 Virgin Australia Supercars Championship. Scott McLaughlin managed to nurse his heat affected Shell V-Power Racing Ford into second and edged further away from his main championship rivals. For Reynolds the result was a satisfying end to the weekend after being unable to convert his pole position in race 15. Rick Kelly, on the other hand was left scratching his head after his Nissan dropped away from the podium after taking pole position in the shootout earlier in the day.  (Photo – Matthew Paul)

Scott McLaughlin set a new lap record in qualifying but was unable to match the time of Kelly, who had initially qualifed with a new lap record of 1.05.5538. James Courtney was 2nd and Anton De Pasquale 3rd. Fabian Coulthard. Nick Percat. Rick Kelly, Jamie Whincup, Garth Tander, Michael Caruso and David Reynolds completed the top 10. Chaz Mostert was the best of the Tickford entries in 13th as Mark Winterbotto languished in 24th position.

The shootout format resulted in a very different top 10 formation. Rick Kelly jumped to the top of the order as the latter runners were unable to match his sector times, McLaughlin went close, but fell 4/100ths of a second behind. Whincup moved into 3rd and Reynolds leapfrogged 6 places into 4th. Percat, Tander, Caruso, Coulthard, Courtney and dePasquale rounded out the 10.

Kelly and McLaughlin ran side by side towards turn 1 as Jamie Whincup looked to gain position on the inside. As Scott moved his Shell V-Power Ford behind Kelly to stop the move from Whincup, David Reynolds loomed on the outside of the track. He left his braking to the last possible moment and used the extra momentum to sweep around the the trio and into a good lead. The move has been tried so many times before with at least one car taken off the track, but on this occasion Reynolds judged it to perfection. Garth Tander tried to box Whincup in at the entry to the corner and moved alongside McLaughlin mid corner.

Andre Heimgartner found himself off on the grass at turn 5 after the pack bunched on the approach to the corner. Craig Lowndes had moved left to pass Anton dePasquale but was unaware of Heimgartner who was positioned on the extreme left of the track. The pair touched and Heimgartner speared off onto the grass. James Golding, Tim Blanchard and Macauley Jones also ran off in an incident set to be investigated by stewards post race.

Reynolds and Kelly were among the first to pit, as the Erebus team ran a different strategy to the previous day. The majority of driver elected to stop around the 20 lap mark. Simona De Silvestro was sent wide at turn 10 after contact from Anton dePasquale which put the Harvey Norman Nissan into a spin through the gravel and into the tyre wall. The car eventually emerged with damage to the right front corner of the car.

Scott McLaughlin’s Shell V-Power Ford started to burn some of the sponsor’s product and produced a whispy cloud of white smoke which seemed to get worse as the team prepared for their second pitstop on lap 36. Jamie Whincup also stopped on the same lap and followed the smoke trail as McLaughlin returned to the track. The problem was traced to high oil temperatures which was causing oil surge blow by in the engine. Engineer Ludo Lacroix coached McLaughlin to ensure that the oil temperatures were managed and had his driver look for opportunities to get cooler air into the engine on the straight.

Rick Kelly lost rack position to McLaughlin and Whincup when he stopped one lap later, but David Reynolds was able to maintain his lead when he eventually stopped for the last time on lap 38. There were further concerns for the number 17 Ford when the cooling fan air hose for McLaughlin’s helmet had worked loose. Temperatures inside the cabin rose to 68 degress celsius, though the driver seemed to cope with the extreme conditions. As the pitstop cycle concluded, Shane vanGisbergen looked to make a late charge. He had taken his scheduled stop much later than those ahead and sought to move past those who were now struggling on their heat fatigued tyres..

A late Safety Car was called on track with 16 laps to run when Lee Holdsworth’s front splitter separated and left part of the undertray on the main straight. The Triple 8 team hoped that the bucnhed field would allow vanGisbergen to maximise his tyre advantage over the field. He made short work of Nick Percat at the restart but found it more difficult to get by the Castrol Nissan. It took 4 laps for an opportunity to present itself and the number 97 finally moved past Kelly when he ran wide at the exit of the hairpin. The Red Bull Commodore was then able to out drag the Nissan to to turn 7.

David Reynolds controlled the final stages of the race with a 1 second margin to the finish from McLaughlin with Jamie Whincup close behind. For Reynolds the win was another opportunity to share his own unique perspective on the day.

“I always try and get the best starts I can and I just hung my balls out at Turn 1 and went a bit deeper than everyone and it paid off,” Reynolds said.“It really set up our race. We had awesome pitstops and good strategy. My car was amazing today, I couldn’t fault it. Darwin has been the best weekend for us for a long time. It’s just been magical, the whole weekend.”

Scott McLaughlin was relieved to have survived the sauna like conditions and issues with his car and extend his championship lead to 161 points.

“It was pretty hot going there. The engine was hot, I was hot, we had stuff going on everywhere,” McLaughlin said.“The car was actually really good, we just couldn’t get close to people because of the heat of the engine. Then down the straight I was plucking sixth gear and just trying to get the [air] hose for as long as I could and get some helmet fan for a bit. But I think it’s a solid day for us. We’ll take that and run.”

Third for Jamie Whincup wasn’t a win he needed, although it was a step in the right direction

“It’s certainly nice to be back on the podium. It’s been a little while,” Whincup stated. “We were schooled in the pits. We could have got another spot, my error, but the car was nicer than what it has been so I’m looking forward to what we can do from here on in.”

The Virgin Australia Supercars Championship heads east to Townsville for the next round in early July.