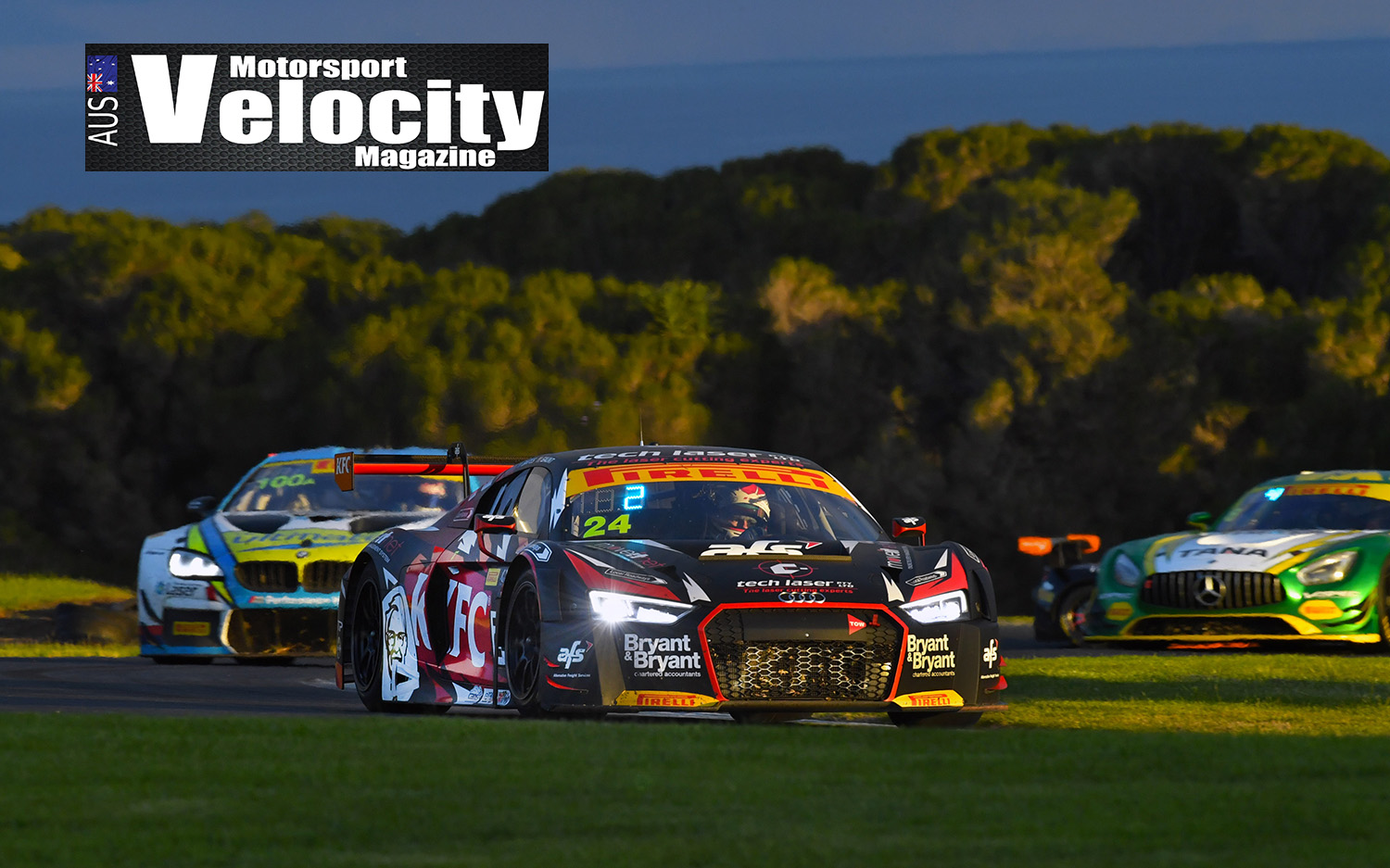 AUDI DRIVERS Daniel Gaunt and Tony Bates claimed an unlikely victory at the Phillip Island round of the 2018 Australian GT Championship when the dominant Porsche 911 GT3-R of Liam Talbot and John Martin suffered a race ending incident at turn 2. Unseasonably mild weather greeted teams and drivers for the race. The prospect of some rain from a wide band of dark clouds which edged towards mid race failed to materialise and played no part in the three incidents which caused the race to run time certain and well short of the scheduled 101 laps.

Talbot and Martin had dominated proceedings up to that point. John Martin started from pole and quickly drove away from the field, he had established a 3 second gap on just the first lap of the race. He held a 50 second lead by the time the first pitstop cycle began to unfold. The team then gambled on strategy and put Talbot into the car as many of his rivals continued with their faster driver. The plan worked perfectly for the Walkinshaw Porsche as two incidents resulted in race stoppages and lengthy delays to repair damaged tyre walls.

As John Martin streaked away as the pack filed through turn 1, the Adrian Deitz/Cameron McConville Lamborghini Huracan ran wide and made contact with the Game Over McLaren 650s of Tony Quinn and Grant Denyer. The Huracan suffered mostly cosmetic damage to the rear end of the car, while the McLaren rolled slowly back to the pits with damage to the left front corner and rim, with the tyre going flat as a result. Quinn continued for a short period of time after an unscheduled pit stop for running repairs and then retired the car on lap 7. The Lamborghini Huracan managed to continue and recorded a top 10 finish.

Shane vanGisbergen had endured a difficult weekend in the YNA Autosport McLaren after an engine issue slowed the car throughout the practice and qualifying sessions. Shane moved from the rear portion of the field and caught the sister car of Fraser Ross during the early stages of the race. He then suffered a spin  when the steering wheel on his car malfunctioned. The car overshot the pitlane with the air intakes blocked by large chunks of grass as the team looked to repair the faulty steering wheel. A second retirement was avoided when the team were given the steering wheel from the Tony Quinn car for the remainder of the race.

The Scott Taylor/ Craig Baird AMG Mercedes and Tony Walls/ Warren Luff 650s McLaren made contact with the Mercedes handed a pit lane penalty for the incident. There was also another contact at MG between vanGisbergen and the Ash Samardi/ Dylan O’Keefe Audi with no response from race control.

The Safety Car was summoned after 39 laps when the Hogs Breath Cafe Ginetta GT4 of Mark Griffith and Rio Nugara cannoned into the tyre wall on the downhill run towards MG corner.

Replays showed the car turn right at the left hand Lukey Heights corner and head, at speed, towards the wall. Nugara was a passenger as the car skated across the grass and turned around. It ran rear first into the tyres and was then flung back out in a violent twist, which ripped the rear from the car and spiraled the car over a metre off the ground. As Nugara made his way unaided towards the Marshal post a thick pall of grey smoke and orange flame appeared from the cockpit of the car. Fire crews were soon on hand to extinguish the flames.

Damage to the tyre wall brought out a red flag and cars were parked on the main straight. The race eventually resumed at 3.10 pm. Fraser Ross led the field away and then made a scheduled stop that had been due at the time of the Ginetta crash. A large portion of the field also stopped as the red flag had disrupted many of the planned strategies.

The race was then stopped for a second time after another incident at turn 2. Vince Tesoriero lost the rear end of his KTM Crossbow on the exit of turn 1 and spun into the tyre wall on the run into turn 2. Moments later the Aston Martin Vantage GT4 of Jeremy Gray and Andrew Miedecke collided with the Crossbow after it also ran off the track. There were some unsubstantiated reports that the Aston Martin had been caught out by an Audi that had slowed for the initial incident.

John Martin took the lead as the race resumed for a third time with just 40 minutes left to run. The Porsche looked set for a comprehensive win, only to suffer a race ending incident when Martin was caught out at turn 1. “It’s a bit weird really,” said Martin. “We’re looking to see if anything failed. It washed wide, then half on the kerb, half not on the kerb. It tore the splitter off and did a fair bit of damage.

Daniel Gaunt took over the KFC Audi and had the race win literally fall into his lap as those ahead made their final stops and the Peter Hackett/ Jake Fouracre AMG Mercedes GT3 received a pit lane penalty for a restart infringement. He controlled the final stage of the race to hold off the Steven Richards/ Michael Almond BMW M6 GT3 by 4 seconds, with the Max Twigg/ Tony D’Alberto AMG Mercedes GT3 a further second behind in 3rd.

“Because of the red flags, the overall strategic picture of the race became quite hard to follow, but our race engineer Adam de Borre was simply brilliant – not only did he nail our strategy, but he was keeping a read on everyone else,” Bates said. “It might have taken a while for Dan to physically take the lead, but after the second round of pit stops, we could see the race was starting to play into our hands.

The win propelled Bates to the top of the championship standings with just Sydney Motorsport Park and Hampton Downs left to run.