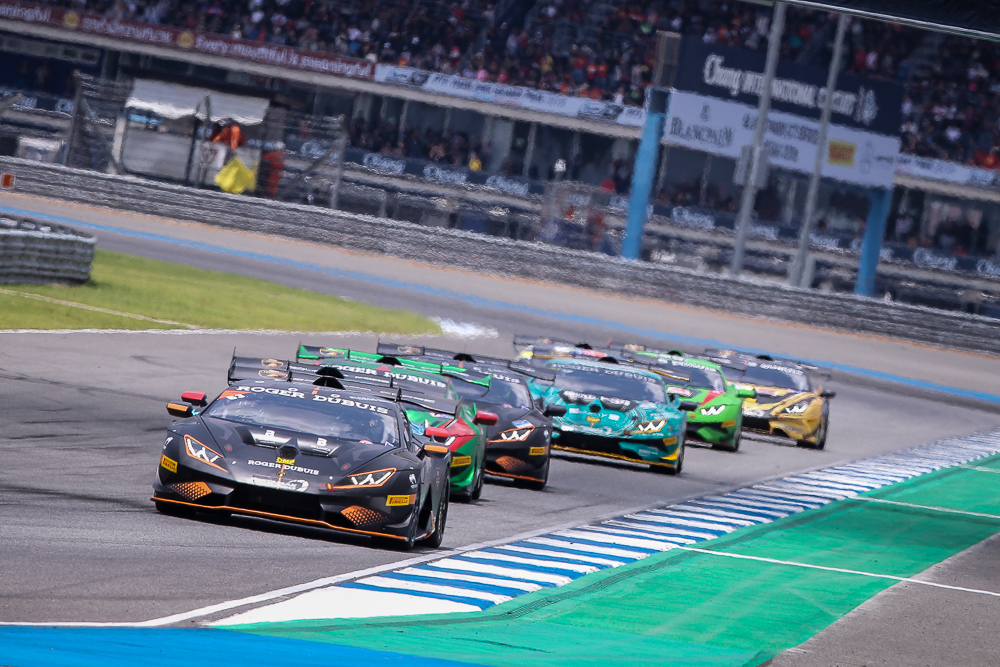 Italian Andrea Amici and Poland’s Artur Janosz of FFF Racing Team celebrated their third victory of the Lamborghini Super Trofeo Asia 2018 with a win in Round 4 at the Chang International Circuit in Buriram, Thailand. Under the scorching morning sun, the pair fought off the pressure from Leipert rivals Ben Gersekowski and Richard Muscat throughout the 50-minute race, before taking the chequered flag ahead of the Australians by just a second. Third on the podium were Pro-Am winners, Japan’s Takeshi Matsumoto and Toshiyuki Ochiai of Hojust Racing.

Tight racing throughout the field saw D1 Racing Team’s Armaan Ebrahim and Anindith Reddy of India and Gama Racing’s Evan Chen of Chinese Taipei and Akihiro Asai of Japan fight for position. While the pair were line abreast in the latter stages of the race, the former held on to cross the line ahead of Chen and Asai to secure second in the Pro-Am class.

In the Am category, Thailand’s Suttiluck Buncharoen of True Visions Motorsport celebrated his first victory of the season on his home track, while 852 Challengers Paul Wong and Clement Li of Hong Kong took him the victory in the Lamborghini Cup.

With the Round 4 win, Amici and Janosz have extended their lead atop the Lamborghini Super Trofeo Pro standings to 12 points ahead of Jack Bartholomew and James Pull in the sister FFF Racing Team car. Gersekowski and Muscat are third, a further 14 points adrift. In the Pro-Am category, Matsumoto and Ochiai have taken a five-point lead ahead of Chen and Asai. Despite a premature end to his Round 4, Thailand’s Saravut Sereethoranakul leads the Am category, while Wong and Li top the Lamborghini Cup standings.

Muscat made a clean start from pole position, but Janosz, from fourth on the grid was off like a rocket and by Turn 3, the man from Poland was leading the race. Muscat immediately piled on the pressure in what would be a race-long battle. However, the safety car was soon called out after Leipert’s Juuso Puhakka and Sereethoranakul spun in separate incidents, with both cars being forced to retire.

When racing resumed on Lap 4, Janosz led from Muscat, Aylezo Motorsport’s Cedric Sbirrazzuoli, Pull and Ochiai. D1 Racing Team driver Han Huilin of China was leading the Am category, while Li led his rivals in the Lamborghini Cup.

The Safety Car was called out for a second time, after GDL Racing Team’s Gabriele Murroni was forced to retire with a tyre puncture.  However, during the Safety Car period, the pit window open and the field immediately dove into the pits for the mandatory pit stop.

There was plenty of drama throughout the field: Amici defended against a pressing Gersekowski, with Gersekowski briefly getting past Amici before the Italian retook the position.  Meanwhile Matsumoto made his way up the order, first getting past Ebrahim and then, in the closing stages of the race, Bartholomew. In the Pro-Am category, Chen piled on the pressure, coming within three-tenths of a second to his rival, but couldn’t find a way past Ebrahim.

Wong and Matsuda were locked in a tight Lamborghini Cup battle with the pair side-by-side. While Matsuda got past Wong twice, each time the Hong Kong driver was able to take back the position, ultimately taking the team’s third Lamborghini Cup win.

The Lamborghini Super Trofeo Asia continues next month in Japan, when it heads to the Suzuka Circuit for Rounds 5 and 6 on June 30-July 1. As the championship fight moves to Japan, the competition across all four championship classes intensifies for a showdown to be remembered.

Artur Janosz #63 FFF Racing Team – Pro Winner Round 4
“The start for me was amazing. I was surprised that I gained so many places. I just had a good reaction time so after two corners, I was already in P1 and I was just keeping this position but it was not easy. Muscat was behind me [and] I felt the pressure. Both times with the safety car, he [caught up] to me. We did a good pit stop and Andrea went again in front and I was already happy but I knew it wouldn’t be an easy win. All race, I felt the pressure – I knew that it was really close. There was a moment when Gersekowski passed him, and I thought P2 is still good, but then the next corner Andrea was in front again and we finished P1. I’m really, really happy about it [today’s win].”

Andrea Amici #63 FFF Racing Team – Pro Winner Round 4
“Another great result for the team. My teammate did an amazing start and after the driver change, we were again in P1 but our rival was pushing a lot so I was just managing the second stint. After the second corner, he passed me so I was trying to recover the position and in turn 5, I passed him and then I managed to put the car in the first place at the end of the race.