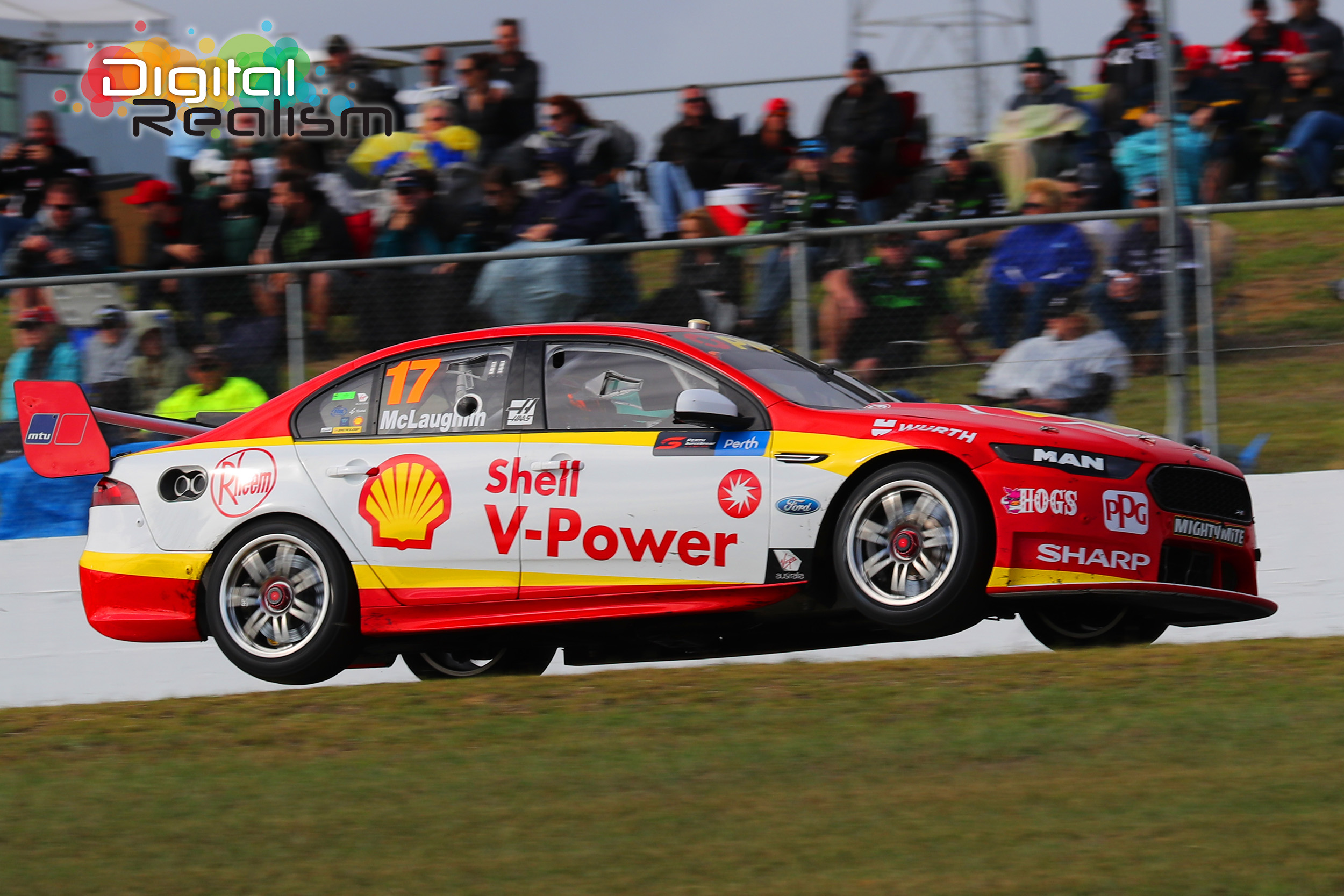 The weather played a major role in the composition of the grid for race 12 in the Virgin Australia Supercar Championship as teams set about to re-map the set up of their cars for the cooler, windy conditions, with the possibility of rain later in the day. The Red Bull Racing Holden pair of Shane vanGisbergen and Jamie Whincup the winners with a lock out of the front row. The pair were separated by barely 0.02 of a second at the end of qualifying.

On the other hand, the Ford brigade, fresh from their qualifying efforts in race 11, dropped out of qualifying in Q1 as Scott McLaughlin, Fabian Coulthard, Mark Winterbottom and Cameron Waters also finished well outside the top 10.  In a turn around for the Nissan team, Andre Heimgartner stood at the top of the leader board as the session wound down, only to drop to 4th at the chequered flag. Two further Nissans of Rick Kelly and Andre Heimgartner also featured in the top 10.

“It’s awesome. It’s a great reward for all the boys”, said Heimgartner. “We really battled yesterday, so to come out today and be fast is really good. We know we’ve got the cars if we put it all together. If we find these sort of set-ups earlier in the weekend at other rounds then we’d be good too.”

McLaughlin conceded the blame for his result when a locked brake forced him wide at the bowl and ended what was the fastest time to that point.

“I put my hand up, completely my fault,” McLaughlin admitted. “Just chasing too much into the bowl, locked a front and ran wide. I was on a pretty decent first sector. We thought we might have been safe because the track  was slow. In hiindsight we wanted to save the tyre..But that’s where we are at. I stuffed up and will take it on the chin”.

Jamie Whincup took the lead of the 83 lap race from vanGisbergen when the latter suffered excessive wheelspin off the line, while Chaz Mostert also moved by the #97 Red Bull car. Andre Heimgartner tried unsuccessfuly to do likewise as the cars jostled for position throughout the opening lap. Scott McLaughlin was lucky to avoid a potential multi car pile up when Richie Stanaway and Scott Pye came to blows at turn 5. Pye was sent sideways as Fabian Coulthard was hit by James Golding in the melee and took to the grass to in an incident that also included Mark Winterbottom and Anton De Pasquale. Coulthard’s dropped to 24th as McLaughlin went on a mission to make up lost ground. He took to the grass on inside of the main straight as he moved past Tim Blanchard, who had moved right to protect his position.

James Golding’s best qualifying result came to naught in the worse possible way. The GRM driver’s Commodore left a crumpled mess in the turn 1 sand trap on lap 4 after contact from teammate Garth Tander.  Tander had been battling with Craig Lowndes for position and left his braking too late for the first corner. He hit the back of Golding, who then buried the nose of his GRM Commodore into the back of Todd Hazelwood.

The Safety Car was dispatched as Golding found himself well and truly stuck in the sand. The entire field bar Will Davison took to the pits for their first stops, which gifted Davison the race lead and dropped vanGisbergen to 18th when he was forced to double stack behind Whincup.

At the restart Davison led from Mostert, Reynolds, Heimgartner, Whincup, Percat and Scott McLaughlin, who had jumped more then 10 places through the incident and subsequent pit stop cycle. Mostert took the lead at the bowl when Davison found it difficult to turn the Milwaukee Falcon into the corner, the sterering geometry of the car had been damaged in a lap 2 tussle with Michael Caruso in the Nissan at turn 6. Mostert and Reynolds drove away from a pack headed by Heimgartner to establish a 4 second lead as the field prepared for the second round of pitstops.

Jamie Winchup was the first to stop, with Mostert, Heimgartner and McLaughlin in one lap later. David Reynolds stayed out for another 6 laps before he pitted form the lead on lap 33. Scott McLaughlin moved into an unlikely race lead at the end of the second cycle as Chaz Mostert’s race effectively ended with a fuel timer issue that resulted in a slow pitstop for the Supercheap entry.

Scott McLaughlin had opened an 8 second lead to David Reynolds at the 50 lap mark, with Heimgartner 2 seconds in arrears in 3rd. The leaders had elected to run a three stop strategy, while Shane vanGisbergen and Rick Kelly were among a group committed to four stops. The leader pitted for his 3rd and final stop on lap 60, with Reynolds covering the move one lap later. McLaughlin enjoyed a 6 second gap to Reynolds as the race moved into the final phase. The Erebus driver managed to reduce the gap to just 2 seconds with 10 laps left to run but had hurt his Dunlop tyres in the process. This left Scott McLaughlin in a comfortable lead which he maintained to the end. David Reynolds survived a wide exit at the final turn to claim 2nd, while Craig Lowndes also managed to climb back from the rear of the field to grab 3rd place from James Courtney in the final laps.

“I’m stoked. I couldn’t believe it. These guys just gave me an unbelievable car”, said McLaughlin. “And the strategy was on point. I joked to DJ before we went out and said ‘I reckon we can win this thing’. Sort of deep down I was like maybe, but I didn’t bloody think I was going to do it.”