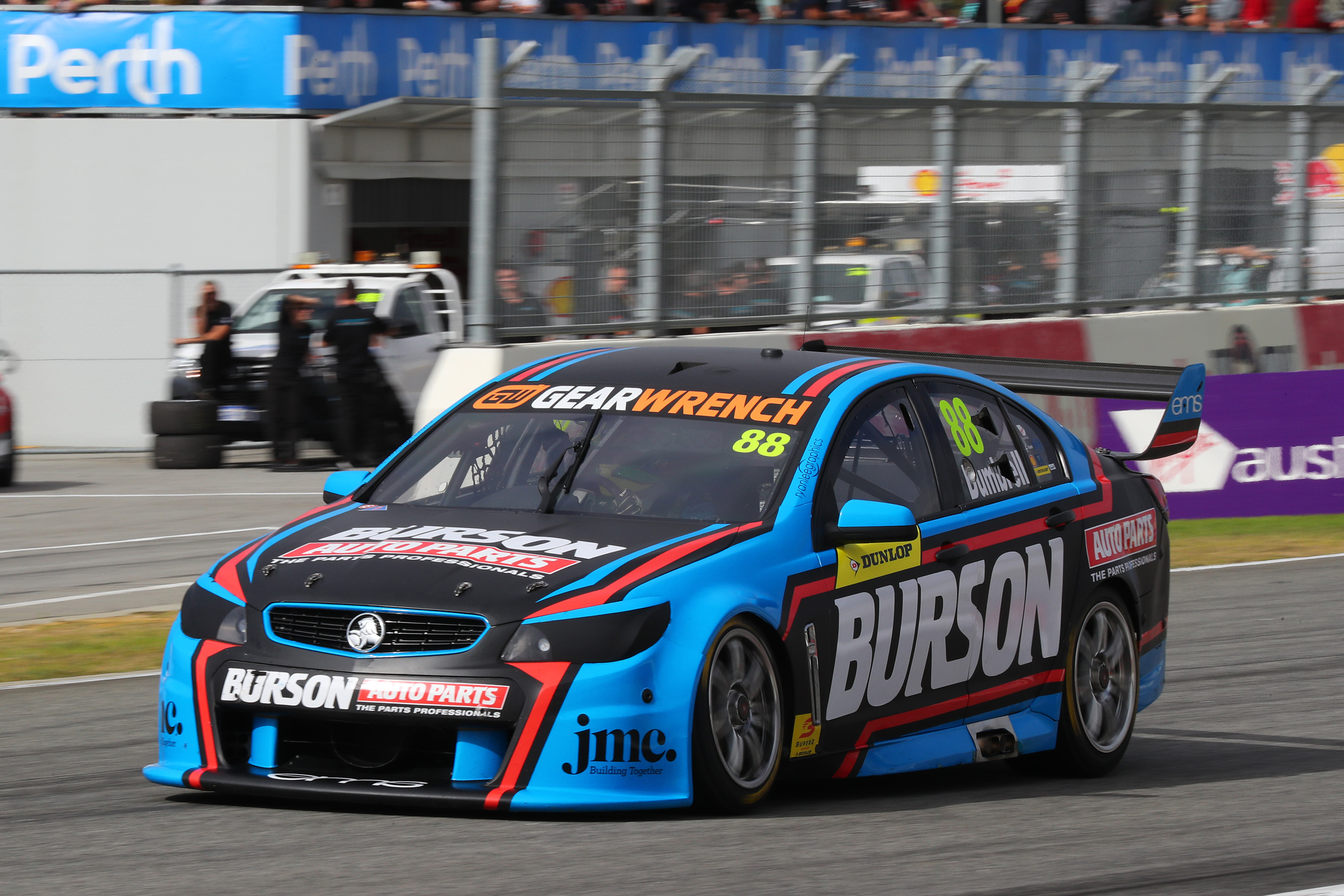 It was a case of the rookie and the legend when Thomas Randle lined up for the second race of the Dunlop Super 2 series at Barbagallo Raceway with Paul Dumbrell alongside. It was Randle’s first pole position in just his 6th race in the category. Garry Jacobson and Chris Pither started from the second row, while Shae Davies, Kurt Kostecki, Alex Rullo, Mason Barbera, Jake Kostecki and Jack Smith rounded out the top 10.

Paul Dumbrell made another fast start to lead Randle as the field filed down towards the first turn. Macauley Jones was another to take advantage of an excellent get away to slot his BJR Payce Commodore in between Smith and Kostecki under the bridge.

Will Brown locked a brake into the bowl as looked for a way past Nathan Morcom into Kol’s corner and ran through the sand, which dropped the Eggleston driver to the rear of the pack. Brodie Kostecki was on a charge after starting from 11th position. He passed Macauley Jones at turn 7 and then did the same to Mason Barbera a short time later. Kurt Kostecki looked to capitalise on a small error from Alex Rullo, who ran wide over the kerbs on the entry to the main straight. Kostecki moved to the inside as Rullo drifted right to protect his position. The pair made contact with Rullo fortunate to keep his Nissan straight as he slid onto the grass in the braking area for turn 1.

Both Kurt and Brodie Kostecki pushed a bit too hard in the final laps, ran off track and dropped down the order to finish 15th and 16th, just behind Nathan Morcom in the DPO Commodore. Paul Dumbrell pulled away from Randle to score a convincing win, with Garry Jocobson 3rd. Chris Pither and Shae Davies were the next best, while Alex Rull recovered from his moment with Kostecki to take 6th. Macauley Jones, Mason Barbera, Jake Kostecki and Jack Smith rounded out the top 10 finishers.

VIEW OUR IMAGES FROM THIS RACE IN OUR GALLERY

Alex Rullo and Thomas Randle lined up on the front row for the final Dunlop Super 2 race of the weekend as rain began to fall. Race Officials delayed the start and chose to eventually start the shortened 19 lap event under Safety Car conditions. Brodie Kostecki became the first retirement of the race when his Commodore suffered a mechanical issue on the grid, which left him stranded as the field moved away.

The field remained on the slick tyre as the rain had already stopped, however the track surface was still quite greasy and drivers exercised caution on the opening lap. Alex Rullo led from Randle and looked to establish a lead on lap 2, however the Nissan driver was caught out by the conditions at turn 7 and ran wide. Rullo returned to the track in 7th place. Chris Pither also ran off track at the same point and dropped to 11th. Thomas Randle then took the lead for the first time in a Super 2 race and looked to keep his Tickford Racing Ford safely on the track. His driving approach soon led to a freight train of cars immediately behind, headed by Paul Dumbrell and Dean Fiore. Dumbrell stalked Randle for the next 5 laps, before he was surprised by Fiore who went past the Burson entry for 2nd. Fiore then moved into the lead a few hundred metres later, when Randle pinched a brake at turn 1. Fiore managed to establish a race winning lead as the lead pack were left behind the black Sky Sands entry.

Paul Dumbrell had been in a duel battle as he tried to pass Randle and fend off the challenge from Garry Jacobson. Dumbrell’s job made easier for a short period when Jacobson himself came under pressure from Kurt Kostecki, who took 4th from the Nissan driver on lap 16. Thomas Randle was on course for the round win with just 2 laps of the shortened race left to run. He then dropped 3 places in quick succession as Dumbrell and then Kostecki moved ahead. Garry Jacobson forced Randle wide at turn 7 on the penultimate lap, which allowed Macauley Jones to follow the Nissan through and drop Randle from the round win.

Dean Fiore went on the win the race and the round from Paul Dumbrell, who extended his championship lead in the process. Kurt Kosteki was 3rd, from Garry Jacobson, Macauley Jones and Thomas Randle in 6th.  Chris Pither, Jake Kostecki, Alex Rullo and Mason Barbera rounded out the top 10.

VIEW OUR IMAGES FROM THIS RACE IN OUR GALLERY