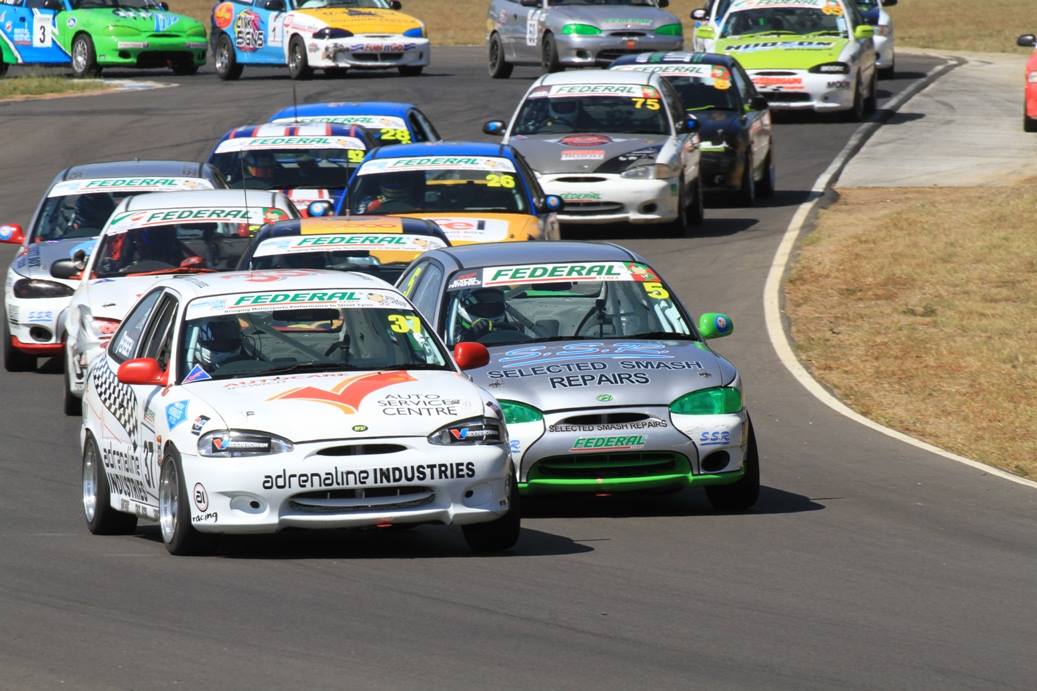 IT WAS a cool and damp morning that saw 20 Hyundai Excels headed out for Qualifying. As the track dried in the 20mins the cars were on track, they were going faster as the session went on. Richard Peasey grabbed pole with a 1:34.918, closely followed by Kaden Olsen, Matthew Wells, and David Wood in 4th. Due to damage sustained to his car from Bathurst, Brock Giblin was in his spare car and Qualified in 6th place. Unfortunately for Ross Street, a transponder issue put him rear of grid, which would see him starting beside his brother Glenn.

The first of 4 races for the weekend really set the scene for the weekend. Richard Peasey was first into turn 1, and that’s where he stayed to win. Kaden Olsen spent most of the race trying to catch Peasey, and finished a strong second. A hard fought battle for third between David Wood, Frank Mammarella and Matthew Wells continued for the full duration of the race, with Wood getting third place. Ross Street finished in a hard charging 6th, having a blinder of a race after starting from the rear of the grid.

First lap contact between Wood and Street in race two saw the later have a DNF.  But nothing could stop the strong drive from Peasey, taking his second victory for the weekend. David Wood finished in second, from Kaden Olsen in third place. Mechanical gremlins for Brock Giblin saw him drop down order. Sieton Conner Young was very excited, achieving a personal best of a 7th place in just his second race meeting.

Sunday morning was nice and cool, so times were going to be quick for race three. Kaden Olsen and David Wood put up a great fight towards a win, but it was again Richard Peasey that was the winner. Amazing racing was seen throughout the field, with a very hard-fought battle for the 6th position between Mammarella, Street, Mark Goldspink, Sean Beggs, Matthew Broadbent, and Troy Perrins. Bayley Hall made his way up to 14th position, and then setting personal best times every race.

Race 4 was one of the hardest fought battles for the lead, with Richard Peasey, Kaden Olsen, and Ross Street pushing each other hard for the full 8 laps! Positions changed throughout the race, but it was Richard Peasey crossing the line first, followed by Olsen and Street. Unfortunately for David Wood, first lap contact put him off the track, and he finished in 20th. The 2017 Champion Brock Giblin drove hard to hold onto 10th place.

It was no surprise that, after winning all four races, Richard Peasey was the winner for round two. Kaden Olsen finished second overall, and Matthew Wells finished third on the podium.

Our next round, The Federal Tyres Series X3 invitational Cup, will be a part of the Shannon’s Nationals event at Queensland Raceway on the 28th and 29th of July.