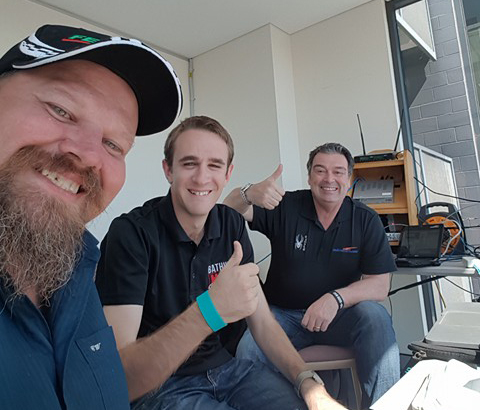 Hot on the heels of a great racing report for the Hyundai X3 Racing at Bathurst over Easter is a great little story we asked Sean “Chubby Wombat” to pen for us about his first trip to Bathurst as a commentator and not a driver in the Hyundai Excels.  Another great read by Sean, thanks mate…

This year, at the Hitec Oils Bathurst 6hr, the Hyundai Excel category raced as part of the support races. As I wasn’t competing, and having the ability to talk on social media to interstate drivers as much as I talk in person, I was asked if I could be the category commentator. Of course I said yes! Who wouldn’t want a chance to be involved in this event, and at such an iconic circuit as Mount Panorama (see, I am already learning the lingo).

The 12hr drive from QLD went without issue, and much of the way down, I was wondering what exactly I would do and how I would go. I have never commentated before. What do the greats say?? Hmm. Not enough laps to purchase a ticket to the last 20. Will the driver’s be racing at 110%?? To be honest, my main worry was I would say something stupid, as most of my friends would know, I can do at the drop of a hat.

Well, Friday was the day it all began. First item on the list was to find out where I was to go, so I asked a photographer mate, who replied “It’s in the media centre”. “Of course!” I replied…….”Where’s the media centre??” After he finished laughing, he showed me where it was. It was here where I was introduced to the man who would be sitting beside me in the booth, Brian Van De Wakker. What a great guy! Not only did he put my nerves at ease, but also made it fun to chat about the Hyundais. I must say, volunteering on a flag point, or being in the driver’s seat, was very different to calling a session on track. We had some great resources at our disposal, with Facebook, live timing, and cctv cameras from around the track.

As the weekend went on, I was getting a lot more confident. Getting to meet the other Commentators and team in the media centre was great. And also hearing the amazing stories from John Hindhaugh from Radio Lemans really made the weekend something to be a part of. I have been listening to his broadcasts for years, and to meet him in person was an honour. It was very humbling to be accepted as a part of the Commentating group as soon as I arrived, and I have made some great friends from it.

So Sunday came along, and the final race was to be broadcast on a livestream feed both in Australia, and Internationally. I realised that there was going to be a large group of people listening to my voice. Nerves rose, but as soon as the action started on track in the Excel race, it was soon forgotten. How exciting it was to be calling a race where anyone in the top 8 can win! Then the race was over, and my job for the weekend was done. Now to sit back and watch some more racing.

The trip back to QLD on Monday was a very reflective one for me. The realisation I can now say I commentated at Bathurst slowly sunk in. I must thank everyone who gave me the opportunity to do this. Thank you to the team in the media centre for such a memorable experience. Thank you to all the Hyundai Excel organising committee for giving me the chance. But most of all, the stars of the show, all the Hyundai Excel teams who raced around the mountain, who were very friendly, sharing with me their stories.

To finish this off, I will answer the few questions I have been asked since.

Did I have a good time? Most certainly did!

Did I enjoy talking on the mic? It was great fun!

Do I want to do it again? ABSOLUTELY!!!