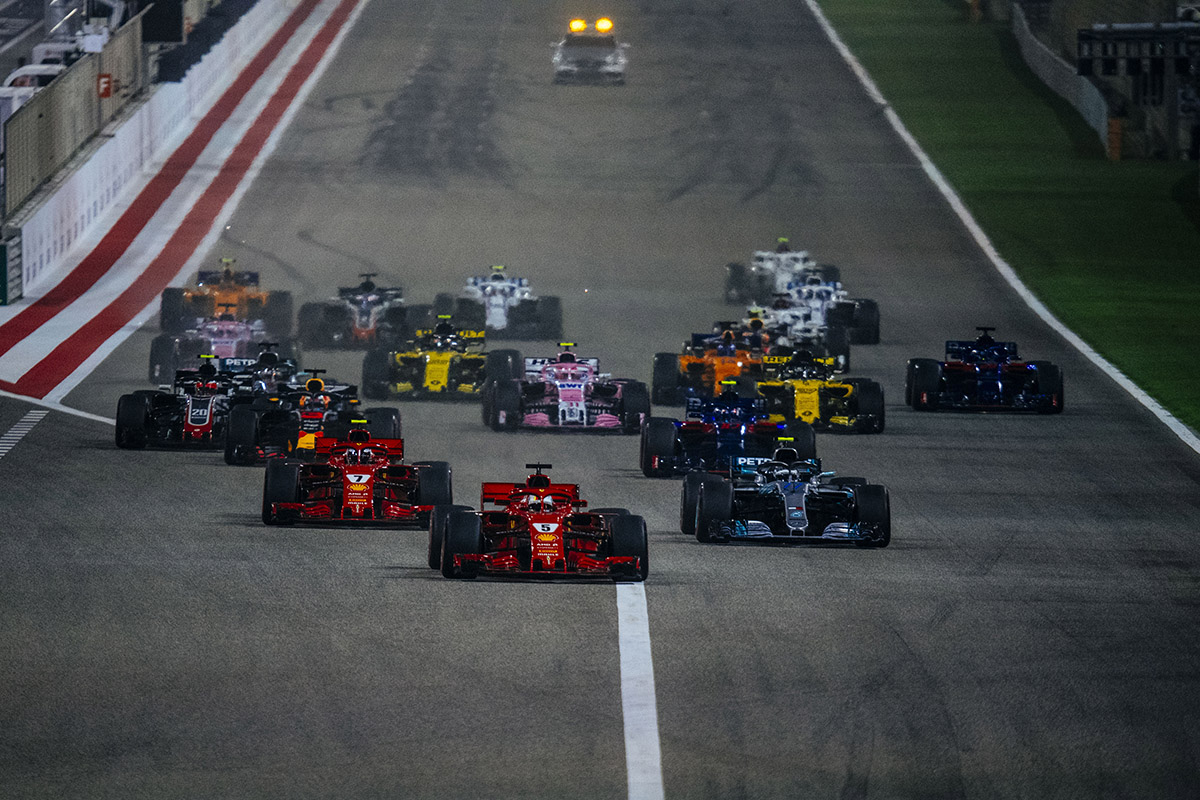 SEBASTIAN Vettel has claimed his second successive win at the start of 2018 after holding off Mercedes’ Valtteri Bottas for victory in an epic Bahrain GP.

Vettel won after running an extended second stint on soft tyres ahead of the one-stopping, medium-shod Mercedes cars of Bottas and Lewis Hamilton.

“Obviously, this is a great way to start the season and it wasn’t expected.” Vettel reported to the media. “Obviously Australia was a different race and if you compare these two races, here we had the pace and won on our own. So, I think it’s been much better, but it was a very tough race. It took a while for the adrenaline to go. We were losing a little bit at the end and Bottas was getting closer. We couldn’t wait and see what he was doing. So, in response to that we had to come in first to protect the track as much as I could. We had targeted two stops and that’s why we had chosen Soft tires. But then we had to change strategy; the tires were already wearing out, but then it seemed everything was ok. But after 10 or 12 laps, the tires got worse and the last five laps were very tricky.”

Ferrari switched Vettel on to a one-stop strategy of his own midway through the race when it became clear he would lose out to Bottas and potentially Hamilton if he pitted again. Bottas caught the faltering Ferrari in the closing stages but could not find a way past Vettel as the four-time world champion eked out his ailing tyres.

Kimi Raikkonen retired from third place after a botched pit-stop in which a Ferrari mechanic suffered a double leg break.

“What happened to our guy Francesco today at the pit-stop is very unfortunate.” Raikkonen explained. “I feel sorry for him and hope he’s going to be OK soon. It’s always a bad thing when someone gets injured but I am sure he has the best people taking good care of him and I wish him a speedy recovery. As for the accident itself, all I know is that I moved when I saw the green light go on. I couldn’t have possibly realized that there was an issue with the rear left wheel, then I saw someone had got hurt and, immediately, I was told to stop by the team.

On a disastrous evening for the Red Bull team, both Daniel Ricciardo and Max Verstappen retired in the opening laps. Ricciardo’s car suffered a catastrophic loss of power while Verstappen’s RB14 was severely damaged after a collision with Hamilton’s Mercedes. Verstappen later blamed Hamilton for the clash, arguing the world champion had not given him sufficient room.

Daniel Ricciardo explained his retirement.“Coming in to turn eight I lost all power, everything switched off without warning and I couldn’t do anything. I guess it’s an electrical engine issue, maybe battery related but I don’t know exactly yet.”

Max Verstappen laid the blame for his retirement on the incident with Lewis Hamilton.

“Due to the hit with Lewis we sustained some more severe damage than just the puncture, we haven’t had a chance to look at the car yet but we suspect the differential”.

Pierre Gasly finished an outstanding fourth for Toro Rosso-Honda. “It’s unbelievable,” said Gasly. “We never expected something like this.”