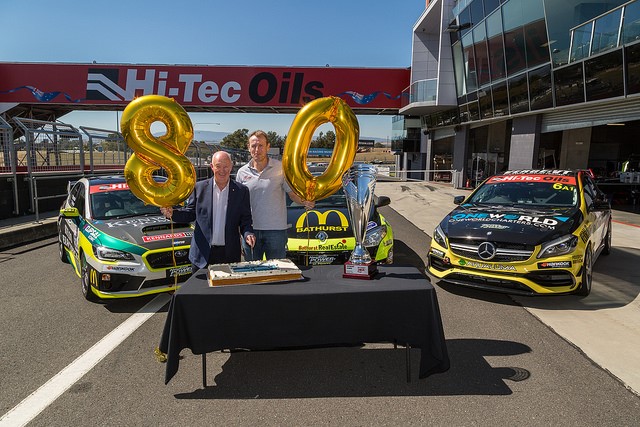 THE Hi-TEC OILS Bathurst 6 Hour will this weekend celebrate the 80th anniversary of racing commencing at Mount Panorama, Bathurst.

Celebrations kicked off in style today with a pit lane unveil of a special Bathurst birthday cake, depicting the first car race held at the venue, ahead of this weekend’s running of the iconic circuit’s newest Easter racing tradition on the Mountain.

The first race to be held on what was then a fully dirt circuit was for two-wheeled competition, with the ‘Australian 150th celebrations TT at Mount Panorama’ being conducted on April 16 (Easter Saturday) that year.

The result was reportedly unpopular with locals, reports of the era suggesting the mayor and winners were ‘pummelled with local vegetable matter during the ceremony’.  Bathurst would host the Australian Grand Prix on four occasions, Lex Davison winning the last one contested at Mount Panorama in 1958.

Six years later the circuit would commence a new tradition that has since become the Bathurst 1000.  Bathurst Regional Council Mayor, Cr Graeme Hanger, said the circuit ‘meant a lot to the town of Bathurst’.   “Let’s look back to 1938 – we’ve all seen the images from then. The track was all dirt and the pits were just a term for a bit of a garage on the side of the course,” the Mayor said.  “How far have we come since then? There’s been constant upgrades to the track each year and it gets better and better.

“We’re very, very proud of this iconic track and we are happy that it is here. 80 years is a long time – I don’t think many of us will be here in another 80 years, but I am sure this place will be.  “It progresses, its fluid and it’s a great place to be. It’s changing all the time and always changing for the better.”

Local combinations feature prominently in this year’s race thanks to a record number of all-Bathurst entries and drivers from the local region competing this year.  Local businessmen Brad Schumacher and Michael Anderson will join forces in a Subaru Impreza WRX, while young-guns Blake and Kyle Aubin will return to challenge in Class C, driving a Renault Megane RS265.

“That’s what is great about this event, the Bathurst 6 Hour,” Cr Hanger added.  “Local drivers, privateers who put their own time, money and expertise into making this event great. They’ll be going full bore on Sunday and we’re proud of them.  “Hopefully they all do well – hopefully everyone does well and it’s a safe race but we’d love to see some of the local boys do just a bit better than the others!”

The Bathurst 6 Hour has rapidly grown since it’s inception in 2016, now featuring a grid of 62 cars representing more than 17 different brands.

“It has been very pleasing to see the growth of the Race and the way it has been embraced by the Production Car community,” Event Director James O’Brien said.  “There are newer cars continually being built and teams are stepping up their levels of professionalism every year.  “We’re proud to continue the tradition of Easter racing at Mount Panorama and the links to production-based vehicles racing for long distances at this circuit.”

Radiolemans.com will provide audio streaming of Saturday’s practice and qualifying sessions and the Sunday race.