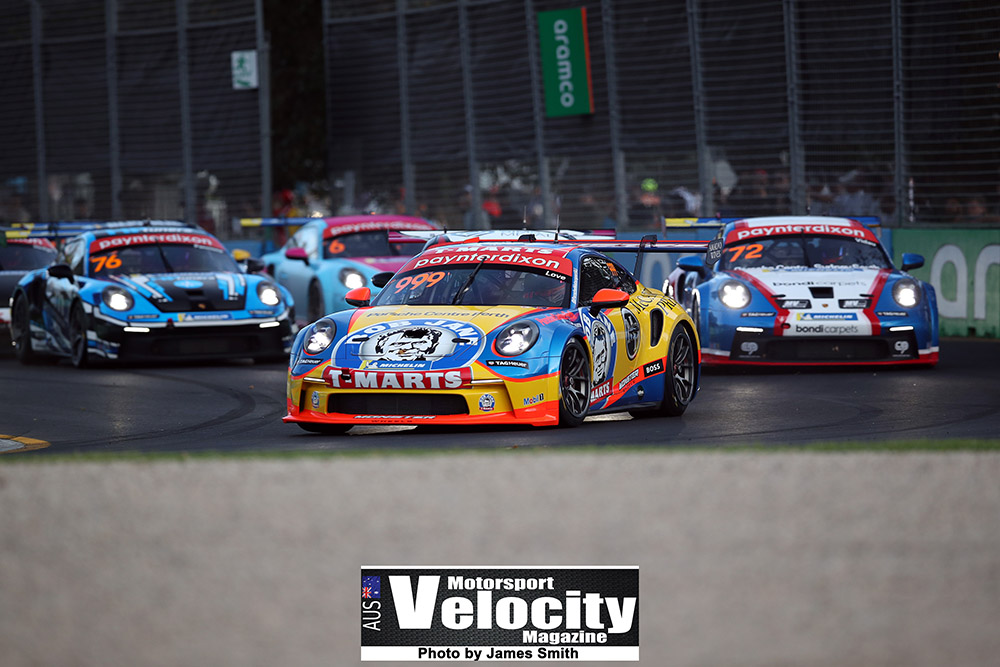 ALBERT PARK came alive for the Porsche Paynter Dixon Carrera Cup Australia, with Aaron Love winning the opening two races of the 2022 season, with both encounters going down to the wire.

The first race witnessed a one-lap dash to the finish following a late safety car, while the second saw Love and Max Vidau trade places multiple times on the final circuit.

The story was similar in Morris Finance Pro-Am, with Geoff Emery winning the first race after two lead changes with Liam Talbot on the last lap, while Talbot earned the top spot in race two.

At the start of race one, Love led away from the TAG Heuer Pole Position, but behind him, McElrea Racing teammates Jackson Walls and Christian Pancione made contact at the re-profiled turn 11, but both were able to race on.

Luke Youlden dropped down the order early after qualifying fourth, then Michael Almond spun at turn two, making light contact with the wall, before ultimately retiring in the pits.

Marc Cini then speared off the circuit at turn 11, also reaching the tyre barrier, but was able to resume, while at the same time, Porsche Michelin Sprint Challenge Australia graduate Matthew Belford spun on track at the same corner.

On the eighth lap, Drew Hall was another driver to come unstuck at the end of the back straight, but as he was unable to extract himself from the gravel trap, the safety car entered the circuit.

With the time certain finish looming, a one-lap sprint to the chequered flag ensued, with third place Nick McBride losing control at the fast turn ten switchback, making race-ending contact with the wall.

Meanwhile, Emery claimed honours in Morris Finance Pro-Am, following a race-long battle with Talbot, which was only resolved after multiple last-lap passes for the lead.

Stephen Grove claimed third in class ahead of Tim Miles and Sam Shahin.

Love once again won the start of the second race with Wall slotting into second, although the opening lap action slowed when the safety car was called for Dale Wood’s turn one spin. 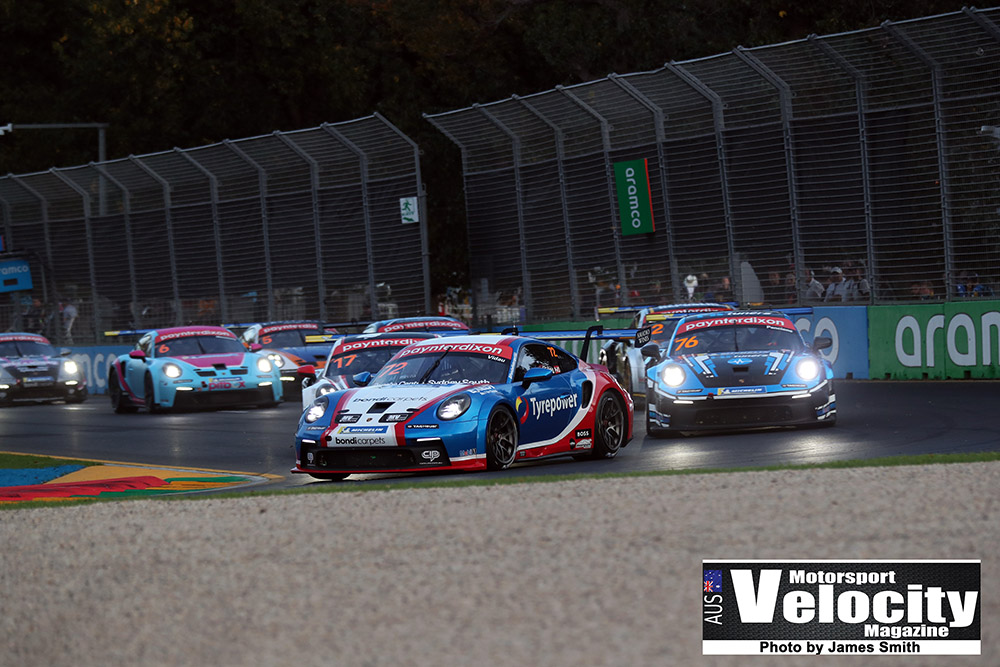 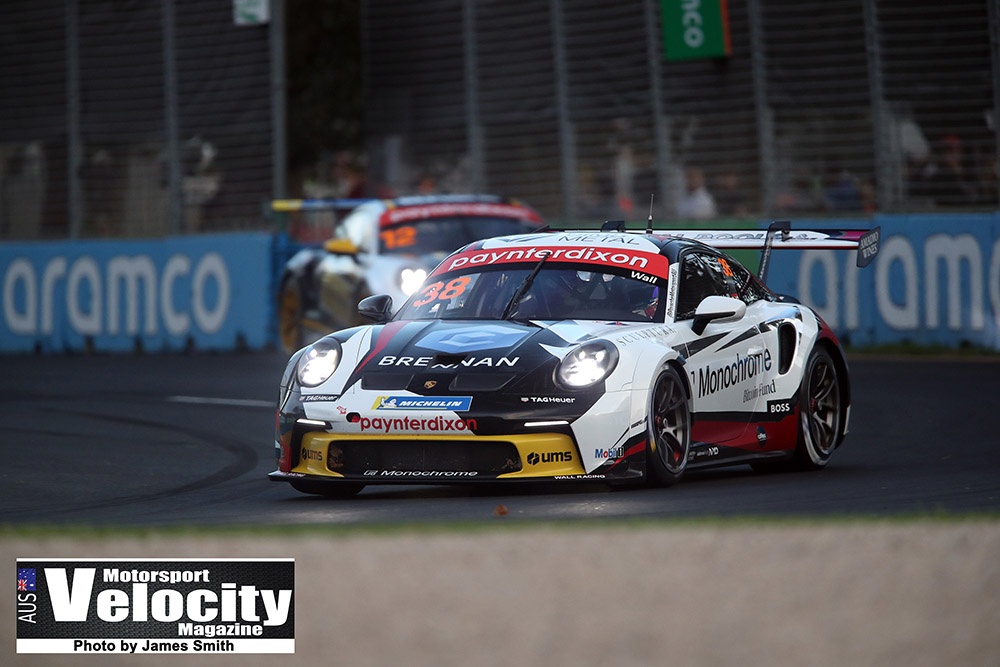 Racing had barely resumed when Belford found the turn two barrier, with the field slowing for a second time.

When racing restarted, Kiwi young gun Hedge earned himself a ten-second penalty for contact with Pancione at turn three, before running wide at turn 11, and finally parking at the same corner on the penultimate lap.

Youlden spun at the final turn, while Almond ran wide at the first corner after a spirited battle with Bailey Hall, with the action topped off by Tony Quinn touring the turn three gravel trap.

Battling throughout the field in the truncated 11 lap race came thick and fast, with the scrap for the lead seeing multiple changes on the final tour.

First, Love ran wide at turn four, with Vidau completing a daring outside move at the following bend.

Vidau subsequently ran off at turn ten, allowing Love back through for the victory.

With the new track configuration coming to the fore, Vidau lowered his own Albert Park lap record in the twilight second race with a hot time of 1:48.6349s.

In Morris Finance Pro-Am, Talbot got the upper hand over Emery, Shahin, Grove and Miles, with little separating the combinations.

“A bit of a wild race, you can never complain about coming away with a race win, but I made a couple of mistakes that cost us a bit, and we happened to get a little bit lucky towards the end,” Love said.

“At the end of the day, we came away with a race win, but there are a couple of things we can take away from it, and learn from, get stuck into the car and see what we can put together for tomorrow.

“Coming back to do just a one-off round with Sonic at the Grand Prix, I couldn’t think of a better place to do it, I’m really happy to get some results for them so far, and hopefully, we can continue the streak onwards.”

“It was a good battle, I had a good race, and he kept the pace up to me throughout all of the race.

“It’s nice to redeem ourselves from race one in this one, a little bit of contact there, but we tuned the car up, tuned the driver up, and got ready to go,” Talbot said.

“I love the new car, seriously, how could you have a bad day in a Porsche?”

THOMAS RANDLE – BACK TO WINTON

ITS OUR FIFTH YEAR IN A ROW! Our decision to create a dedicated Bathurst souvenir…