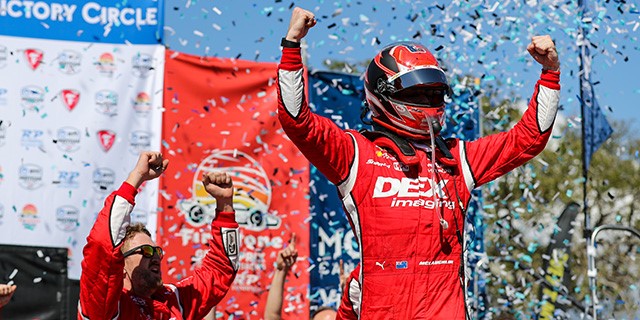 Scott McLaughlin delivered on the promise he showed to Team Penske when it signed him straight from touring cars to race in the NTT INDYCAR SERIES, earning his first career victory Sunday in the Firestone Grand Prix of St. Petersburg presented by RP Funding.

NTT P1 Award winner McLaughlin drove his No. 3 DEX Imaging Team Penske Chevrolet from the pole to victory by .5095 of a second over reigning series champion Alex Palou, who applied heavy pressure to McLaughlin over the closing laps in his No. 10 NTT DATA Chip Ganassi Racing Honda as they raced among and through slower traffic.

New Zealand native McLaughlin made his NTT INDYCAR SERIES debut at this event in 2020 after winning three straight Australian V8 Supercars championships and then raced in his first full season of open-wheel competition in 2021. 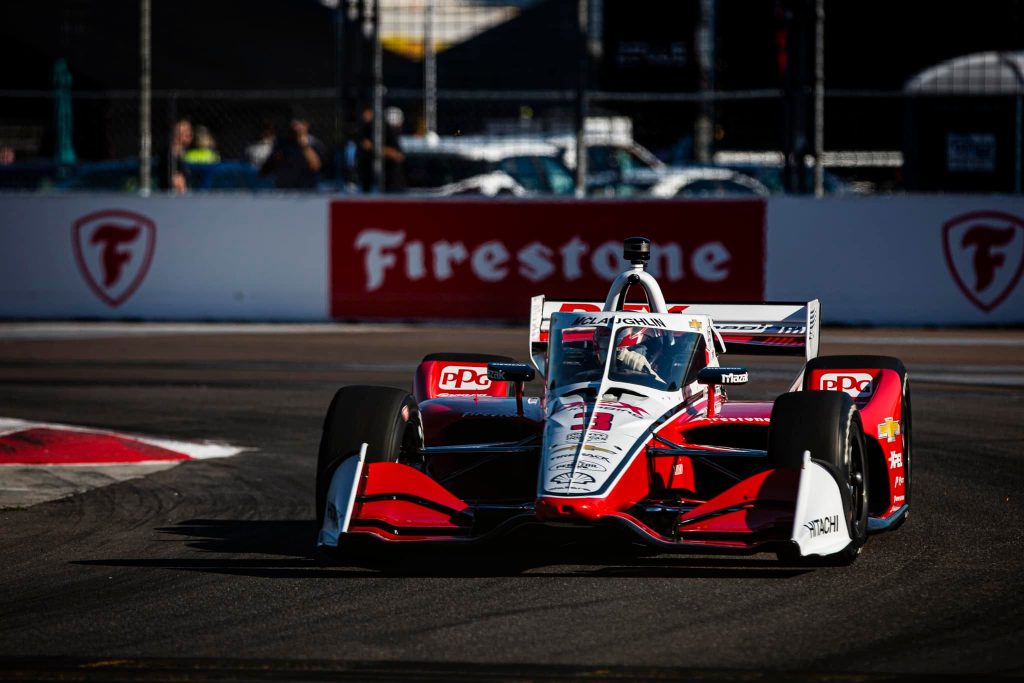 He finished 14th in the standings, with a best finish of second, and earned series Rookie of the Year honors despite the strain of not seeing his family since 2020 due to pandemic-related global travel restrictions. McLaughlin sat in front of his winning car in Victory Lane, celebrating with his family via videoconference on his phone.

“Thank you to Roger Penske, everyone,” McLaughlin said. “Yeah, DEX Imaging jumping on board, trusting me, and then Roger Penske and Tim Cindric giving me the opportunity to come here.

“I miss my mom and dad dearly and my family. Wish you guys were here. What a day.” 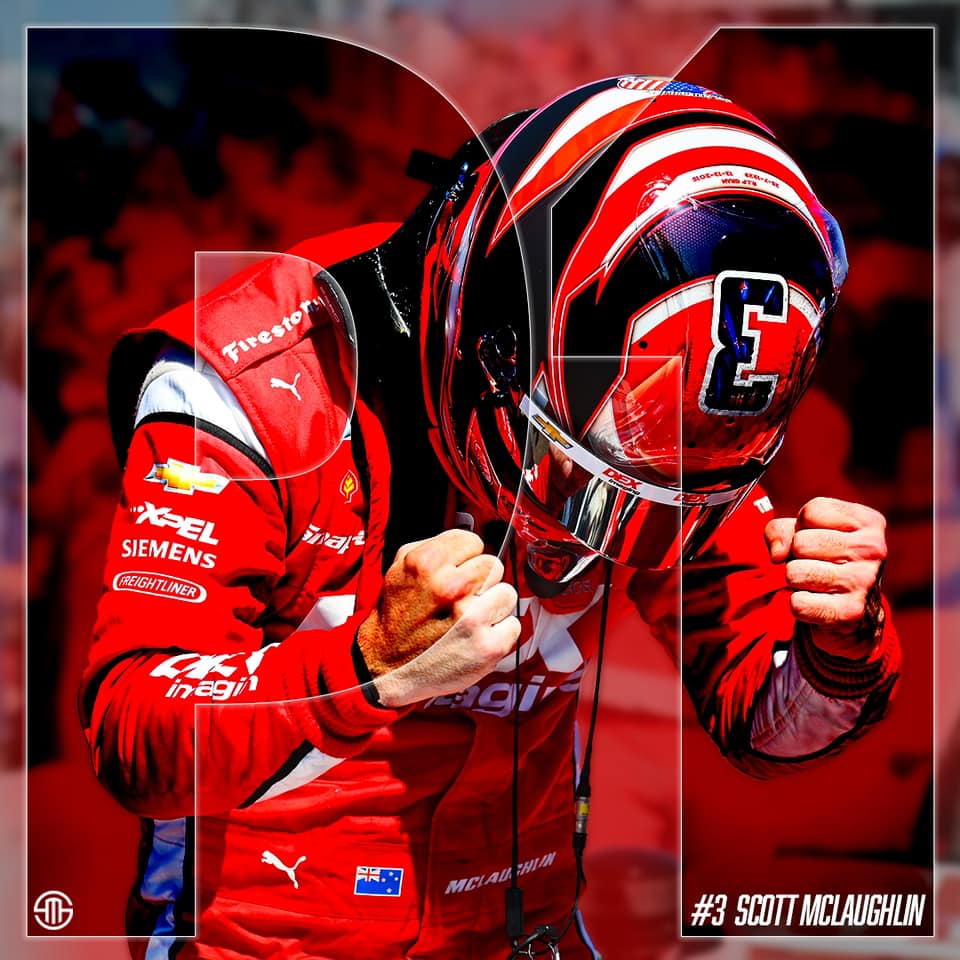 Will Power finished third in the No. 12 Verizon Team Penske Chevrolet, 2.461 seconds behind his winning teammate. Colton Herta finished fourth in the No. 26 Gainbridge Honda, while Romain Grosjean rounded out the top five in his first start for Andretti Autosport in the No. 28 DHL Honda.

McLaughlin became the second consecutive driver to earn his first series victory in the season opener. The driver who pulled off that feat last year – Palou, at Barber Motorsports Park – stretched McLaughlin to his limit over the last 13 laps of the 100-lap race on the 14-turn, 1.8-mile temporary street circuit.

A fascinating duel between drivers on two-pit stop and three-stop strategies unfolded into a straight fight between McLaughlin and Palou – and their two-stop plans – after six-time series champion Scott Dixon made his third and final pit stop in the No. 9 PNC Bank Chip Ganassi Racing Honda on Lap 80, surrendering the lead to McLaughlin.

McLaughlin led Palou by 2.150 seconds when Dixon pitted. It appeared only a caution period would bunch the field, as McLaughlin controlled the pace from the front. That caution never came, as this race featured an all-time event low of just one yellow-flag period, but slower traffic turned the closing laps into a scintillating dance between McLaughlin and Palou.

With 13 laps remaining, McLaughlin approached the No. 48 Carvana Chip Ganassi Racing Honda of Jimmie Johnson, who was racing to stay on the lead lap. McLaughlin had to find a spot on the concrete barrier-lined circuit to thread the needle and pass seven-time NASCAR Cup Series champion Johnson, and that slight delay helped Palou – Johnson’s teammate – close to within .625 of a second.

From there, the gap between the two lead cars ranged from three-tenths to eight-tenths of a second. It appeared on Lap 96 that Palou might get a chance to try to pass McLaughlin as both cars approached the No. 11 ROKiT AJ Foyt Racing Chevrolet of rookie Tatiana Calderon. But Calderon pulled off the racing line on the front straight to let both McLaughlin and Palou scream past.

“Oh, man, it was crazy,” McLaughlin said of Palou’s pressure. “Really struggled those last couple laps just to keep my head and then save the fuel and all that sort of stuff.

“But we did it. Chevy gave us the fuel mileage. Drivability this weekend has been a change, and to win at DEX Imaging’s home race is unreal. Oh, my God, I’m just – love you Australia, New Zealand, miss you guys. Thinking of everyone in the Queensland floods at the moment.”

Palou continued to close on Laps 98 and 99 but couldn’t get close enough to pass. Andretti Steinbrenner Autosport rookie Devlin DeFrancesco was right in front of the lead pair on the final lap, trying to stay on the lead lap. McLaughlin, who along with Palou was saving Push to Pass power until the final lap to conserve fuel, never let Palou challenge over the final trip around the circuit.

“It was close,” Palou said. “It was really, really close, but I don’t think we had the pace he had today. Like he was on rails, and he knew where to go fast and where to obviously save some fuel at the end. I was just there trying to make some pressure so hopefully he made a mistake or anything, but no, he was all good.

“Congrats to him. I’m super happy that he got his first win. Yeah, I’m happier that we got our first podium of the year.”

McLaughlin led 49 of the 100 laps to earn the victory in his 18th career NTT INDYCAR SERIES start. It was the 223rd INDYCAR SERIES victory for Team Penske.

Now that the box for a first victory is checked, is McLaughlin’s win in his first race aligned with Team Penske engineer Ben Bretzman a preview of a possible championship season?

Palou parlayed his first career win last year in the season opener at Barber Motorsports Park into his first Astor Challenge Cup for Chip Ganassi Racing. And the winner of the season opener in the last three NTT INDYCAR SERIES seasons has gone on to win the title in the same year – Palou in 2021, Scott Dixon in 2020 and Josef Newgarden in 2019.

MEDIa RELEASE/Indycar - Photos: Newgarden drove to the first victory of 2021 for himself and…