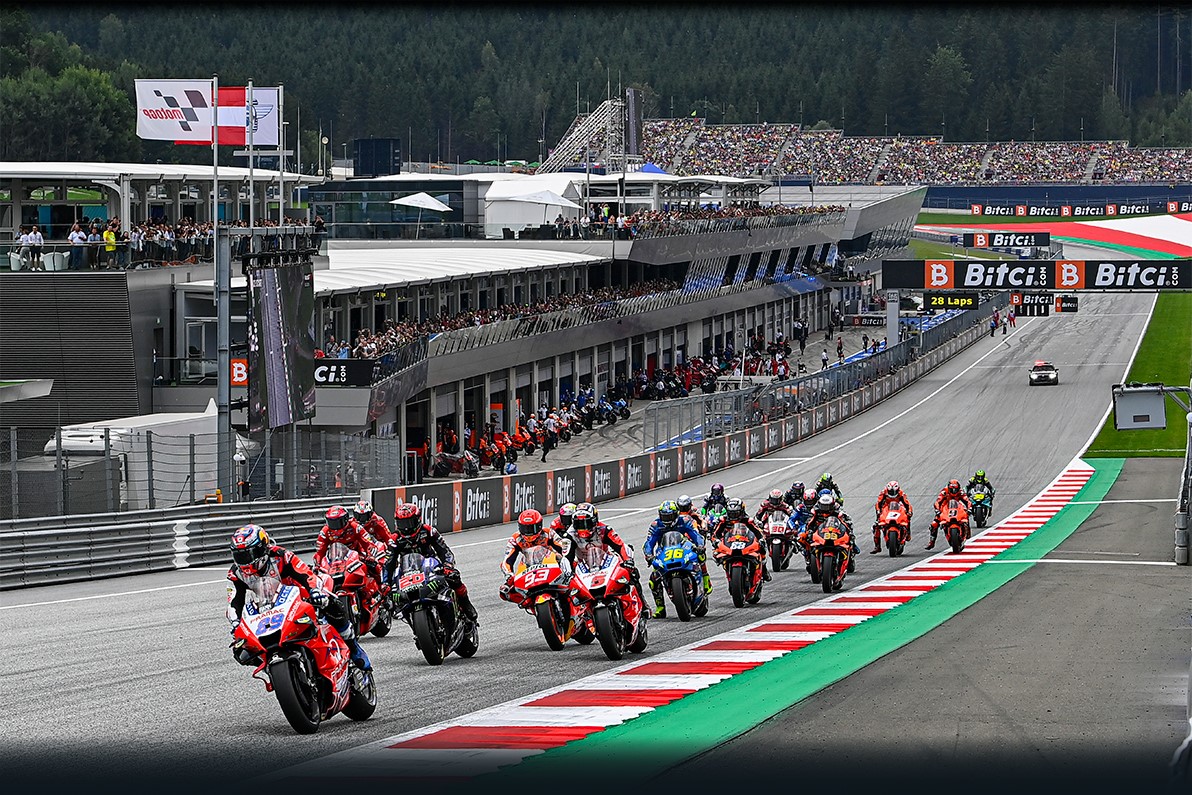 Heavy rain fell with three laps to go as the South African stays out on slicks to win; Bagnaia and Martin snatch podiums on wet tyres.

MotoGP™ races are exhilarating week in, week out. But the 2021 Bitci Motorrad Grand Prix von Österreich was undoubtedly the wildest race we’ve ever seen. Emerging victorious was Brad Binder (Red Bull KTM Factory Racing) the brave, as we witnessed the South African stay out on slick tyres despite heavy rain falling with three laps to go. Francesco Bagnaia (Ducati Lenovo Team) swapped to his wet weather machine and snatched second place on the last lap after passing six riders on the final lap, with Jorge Martin (Pramac Racing) claiming a third podium of the season after also swapping bikes in the closing stages.

Rain was looming in the skies above the Red Bull Ring but the race was declared dry before lights out, and as the race began, polesitter Martin got a wonderful launch to grab the holeshot. Bagnaia was up to second from third on the grid as third place Fabio Quartararo (Monster Energy Yamaha MotoGP) got out of shape on the exit of Turn 1. It was a very busy opening lap as Martin ran wide at Turn 4, with spots of rain showing on the camera lenses. The Spaniard’s mistake allowed Bagnaia through, as Quartararo and Martin got a bit too close for comfort at Turn 6.

A breathless opening handful of laps played out at the Red Bull Ring. Quartararo started to drop back as Marc Marquez, Johann Zarco (Pramac Racing) and Jack Miller (Ducati Lenovo Team) got the better of the Frenchman, but El Diablo regrouped and started picking his way back through the top five. A delicious Turn 3 move around the outside saw Quartararo go from P4 to P2 as he dispatched Martin and Marc Marquez, as Pecco remained the leader.

Not for long though. Quartararo used the Yamaha’s superior corner speed to pounce at Turn 6, only for Bagnaia to return the favour on the next lap at Turn 1, with Quartararo running wide. It was scintillating racing in Austria, with a top five consisting of Bagnaia, Quartararo, Marc Marquez, Martin and Zarco now a second clear of sixth place Miller as the rain flags were withdrawn on Lap 11 of 28. Tensions were sky high with 17 laps to go.

Bagnaia, Quartararo and Marc Marquez, the top three, started to pull clear of Martin as the race hit half distance. The Styrian GP winner was now a second down on third place Marquez, with Zarco a further 0.6s adrift. Reigning World Champion Joan Mir (Team Suzuki Ecstar) had overtaken Miller and was now hunting the two Pramac Ducatis in sixth place, the number 36 three seconds away from the race leader.

A huge moment in terms of the title race then happened with 11 laps to go. Zarco, running 5th, crashed for the second time of the day at Turn 9 and the rider second in the Championship was out. Further up the road, Championship leader Quartararo was feeling Marc Marquez breathing down his neck and with nine to go, Quartararo was wide at Turn 3 and the number 93 said thank you very much – through Marquez went.

Six laps to go, and the rain flags were back out at Turn 3. Marc Marquez briefly took the lead at said corner but Pecco blasted back past down the hill into Turn 4. There were hints of the rain getting heavier with five to go, a lap that saw Miller and Alex Rins (Team Suzuki Ecstar) come in for their bike swaps, but with four to go, it really started to come down.

The top six – Pecco, Marc Marquez, Quartararo, Martin, Mir and Binder – were now locked together and struggling to keep it on the road. Five of the riders then peeled into pitlane for the wet weather bike swap, Binder didn’t. Unbelievable scenes! And KTM’s star wasn’t the only one. Aleix Espargaro (Aprilia Racing Team Gresini), Iker Lecuona (Tech3 KTM Factory Racing), Valentino Rossi (Petronas Yamaha SRT) and Luca Marini (SKY VR46 Avintia) all stayed out as well and were now in the top six and fighting for a podium.

Marc Marquez led the way of the riders who now had wet tyres on, as Binder and co. were producing God-like skills to keep their machines on the road. With two laps to go, Binder was 31 seconds ahead of Marquez but at Turn 1, the number 93 crashed unhurt. Up front, Binder was 11 seconds clear of Aleix Espargaro as the Spaniard had Lecuona, Rossi and Marini all right behind him in the battle for the podium. The track was now fully wet and somehow, most of the riders who had gambled to stay out were keeping it upright. Where were the riders on wet tyres? Well, starting the last lap, Bagnaia was eighth. Binder had a commanding lead but it was as far from comfortable as you could get, the riders having to use every ounce of talent to keep it on the road.

Binder, somehow negotiating a treacherous 4.2kms, was well into the final sector as we saw Bagnaia and Martin carve their way past Rossi, Aleix Espargaro, Marini and Lecuona in Sector 3 on the final lap, before we panned back to see Binder unbelievably round the final corner, crank open the gas – gently – to take the chequered flag in P1. Simply unreal. Bagnaia and Martin crossed the line to take second and third, with Mir also picking off the riders on slick tyres to grab P4 on wet tyres in a breathless end to the race.

Marini and Lecuona, on slick tyres in P5 and P6, earned their best MotoGP™ finishes in a way they could never have imagined. Phenomenal from the rookie and Tech3 rider to bring it home in such incredible circumstances, as Quartararo took P7 to extend his Championship lead. Rossi briefly sat P3 with two laps to go but nevertheless, P8 on dry tyres is a very successful final outing for The Doctor at the Red Bull Ring. The 42-year-old certainly enjoyed that one. Alex Marquez (LCR Honda Castrol) and Aleix Espargaro completed the top 10, the two Spaniards nursing their machines around the final couple of laps too.

Pitting early ultimately didn’t quite pay off for 11th place Miller, the Australian pipped Danilo Petrucci (Tech3 KTM Factory Racing) by half a tenth at the line. Takaaki Nakagami (LCR Honda Idemitsu) was another rider who didn’t pit for wet tyres, the Japanese star crossed the line in P13 ahead of Rins and Marc Marquez, who picked up the last point despite his late crash. Pol Espargaro (Repsol Honda Team) and Cal Crutchlow (Petronas Yamaha SRT) were the other finishers.

Just incredible. A crazy Sunday afternoon ends with home delight for KTM thanks to a second MotoGP™ victory for Binder. Silverstone, the stage is yours.