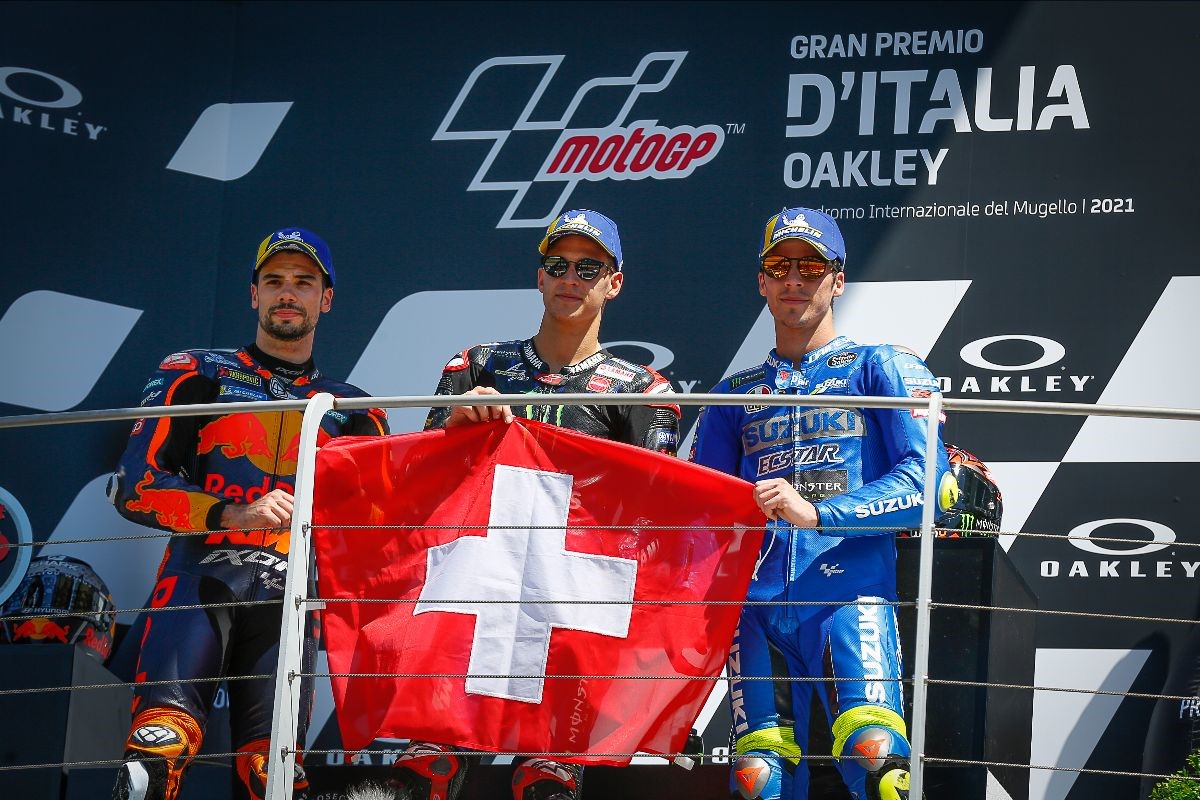 Monster Energy Yamaha MotoGP’s Fabio Quartararo claimed a commanding and emotional victory at the Gran Premio d’Italia Oakley, extending his Championship lead to 24 points. A minute of silence was held on the grid in memory of Moto3™ rider Jason Dupasquier, and Quartararo dedicated his victory to the Swiss rider. 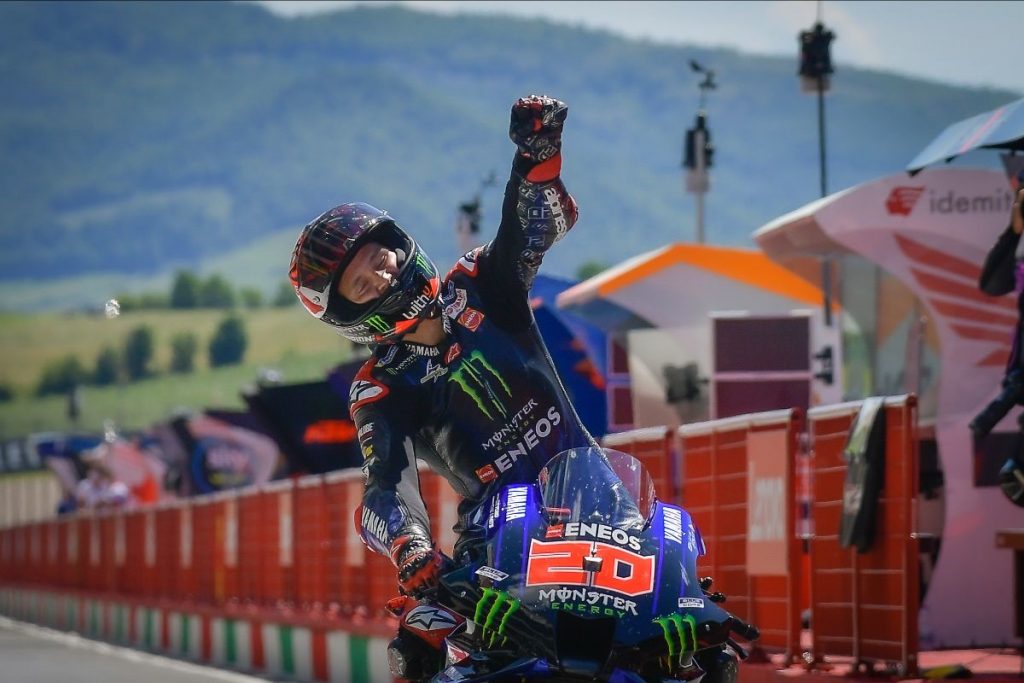 Quartararo’s new front start device worked well off the line as the polesitter managed to keep Bagnaia at bay until the braking zone, when the Italian dived up the inside to lead. Pecco then led the way as the riders settled into the race, but the Ducati rider then tucked the front at Turn 9 on Lap 2. Quartararo was handed the lead, but he wasn’t able to escape quickly as compatriot Johann Zarco (Pramac Racing) duelled the Yamaha.

Eventually, Quartararo broke the slipstream heading onto Lap 5 after making good progress on the twisty part of the circuit, and from there, the Yamaha was able to edge clear of Zarco in second place. By Lap 11 Quartararo’s lead was up to 2.7s and comfortably lapping in the 1:47s, the Yamaha rider was in a league of his own at Mugello and took a third win of the season by 2.5s.

After battling with Quartararo in the early laps, Zarco was forced to focus on keeping Oliveira behind him thereafter. The two Team Suzuki Ecstar riders – Mir and Alex Rins – had trouble making passes stick on Jack Miller (Ducati Lenovo Team) too just behind, Ducati power enabling the Australian to overtake Mir and Rins on the straight. Eventually though, the Suzukis got through and both got into the podium fight.

With eight laps remaining, Oliveira moved past Zarco for the first time at Turn 11 to take P2. Exactly the same manoeuvre was produced by Mir a lap later as the reigning World Champion picked up P3, and he crucially also held Zarco at bay into Turn 1. Rins then pounced with six laps to go as Zarco was shuffled back to P5, with Brad Binder (Red Bull KTM Factory Racing), Miller and Aleix Espargaro (Aprilia Racing Team Gresini) close behind.

With five to go, Rins then crashed out at the final corner from fourth place, a fourth DNF in a row for the Spaniard. Oliveira was able to just fend off Mir, although it was close and initially track limits came into play – but both had exceeded them every-so-slightly. Zarco missed out by just under a second in fourth, although he latter does move up to P2 in the standings though, 24 points behind Quartararo.

Binder gave KTM a double top five at the Italian GP and claims his equal best finish of the season despite never having raced in the premier class at Mugello before, and Miller comes home P6. Aleix Espargaro impressed again to pick up a P7, with Maverick Viñales (Monster Energy Yamaha MotoGP) taking the chequered flag in P8 after his difficult qualifying in P13. 2019 Mugello winner Danilo Petrucci (Tech3 KTM Factory Racing) was ninth to earn his second top 10 in a row, with Valentino Rossi (Petronas Yamaha SRT) completing the top 10 on home soil.

Marc Marquez (Repsol Honda Team) crashed at Turn 3 on Lap 2 unhurt, but forced Franco Morbidelli (Petronas Yamaha SRT) into the gravel, the Italian rejoining down the order. Takaaki Nakagami (LCR Honda Idemitsu) also crashed out of the race late on at Turn 13. Enea Bastianini (Avintia Esponsorama) crashed on the way to the grid after hitting the rear of Zarco’s bike, riders ok.

The riders took the Swiss flag onto the podium in memory of Dupasquier as MotoGP™ sends our deepest condolences to all those he leaves behind.

MotoGP™ will be back on track at the Circuit de Barcelona-Catalunya next weekend. 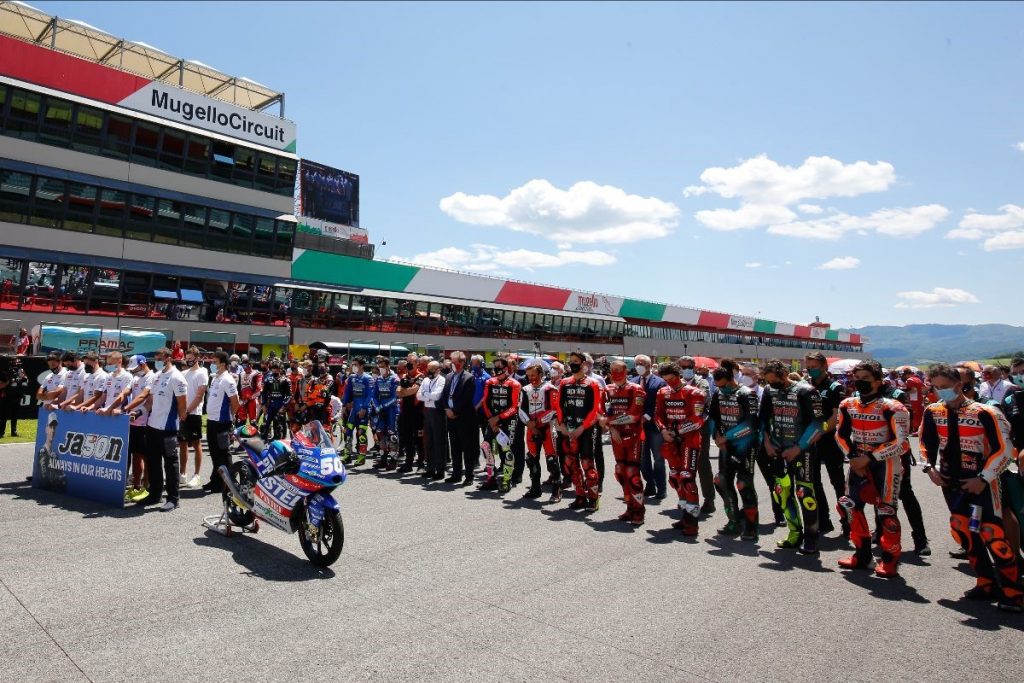 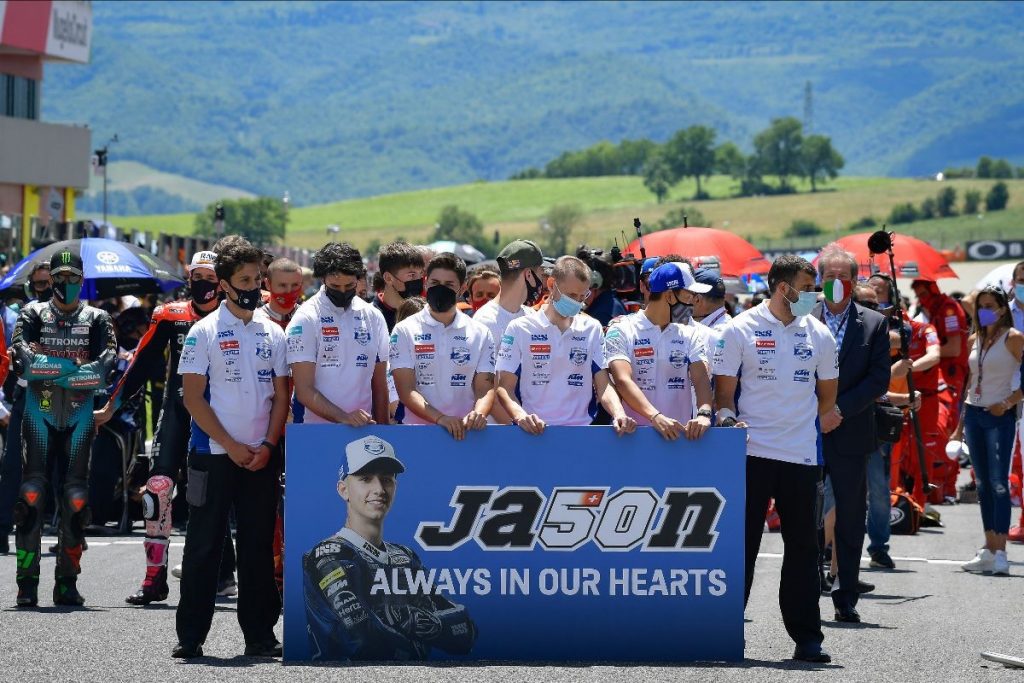 Before the MotoGP™ race at Mugello, the grid observed a minute of silence in memory of Moto3™ rider Jason Dupasquier.

His bike and members of his team led the tribute on the grid, joined by MotoGP™ riders and the Mugello paddock to extend our sincerest condolences to his loved ones.

MEDIA RELEASE/MotoGP - Photo: supplied It's a French 1-2, a Ducati on pole at the…