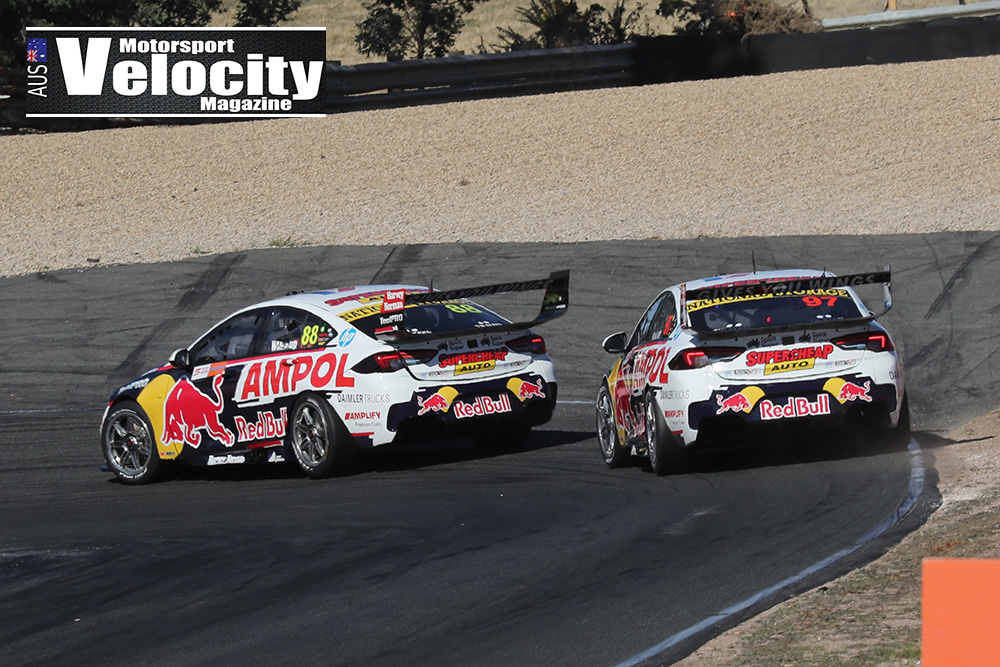 Red Bull Ampol Racing team tasted success over the course of the Supercars Beaureparies Tasmania SuperSprint, with Shane van Gisbergen winning race 6 on Saturday and Jamie Whincup taking race 7 on Sunday, the last race of the weekend number 8 didn’t go their way with neither driver on the podium.

Jamie Whincup – Car #88
“We managed to continuously progress all weekend which was nice. The car was at its best in the last race, however we were a victim of not qualifying well enough to really attack for the podium. You’ve got to walk away happy when you’ve claimed more points than anyone else from the weekend. SVG (Shane van Gisbergen) did a fantastic job to get the quickest lap time ever around Symmons Plains, and two race wins on top of that. A couple of one-two finishes is also a great end to the weekend for the team, but not getting the results we wanted in the last race just motivates us to well in the next one. It’s not a bad thing to not have a good run at the end there – it only makes us hungrier. It was awesome to share my first race win with Wes (McDougall) as well. He’s been working bloody hard, and you want any newcomer to the team to feel the success of winning, because once you feel that success, you want more. Hopefully, after this weekend he feels that we can continue to win races if we do a good job. It will motivate us to challenge the other side of the garage. We don’t necessarily have to beat #97, but we have to give them a really good standard to live up to and motivate them to improve as well. I couldn’t be happier with this weekend, and its great to leave Tassie with the round win.”

Shane van Gisbergen – Car #97
“For the first qualifying session today, we couldn’t quite nail the session compared to yesterday which was a shame, and that made it more difficult for today’s races. We used the remainder of our tyres in the first race, which was pretty good because we managed to get a team one-two finish, although it compromised us for the second race today. We had no tyres, and we pit early, which meant the other teams covered us, and after that there is not much you can do. Even though we didn’t have the greatest tyres, you always want to be up the front challenging for the race win. At the end of the day, one of our championship challengers has won the race, so we need to perform a bit better there. Getting sixth in the last race is a good points booster, and second for the round is awesome. Overall, it was a really good weekend for the team.”