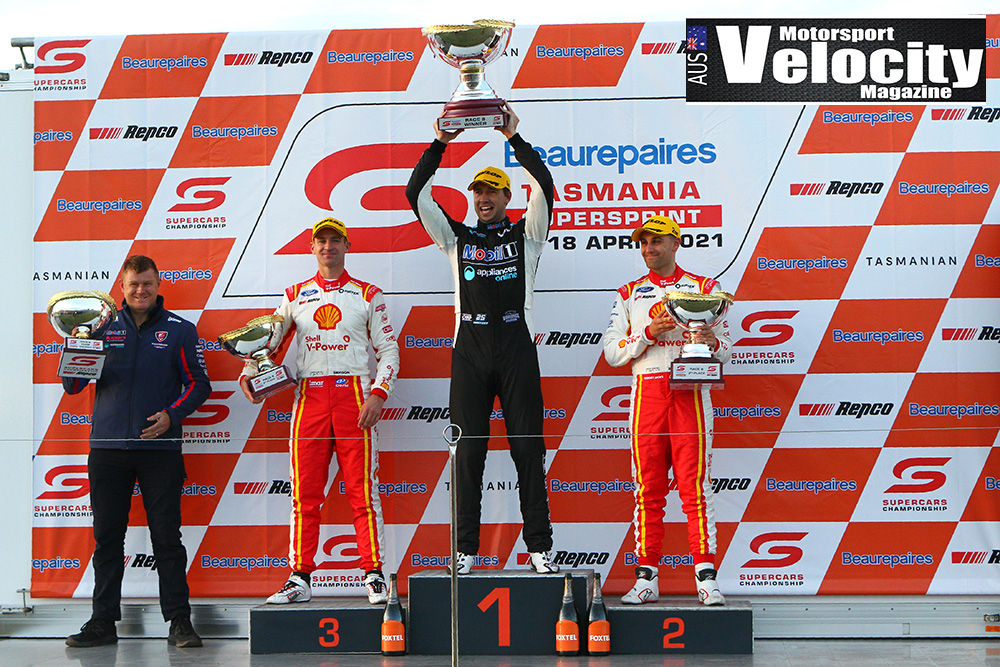 Shane van Gisbergen’s winning streak in the 2021 Repco Supercars Championship came to an end with win 6 on Saturday as tyre strategies finally proved too much for the Kiwi driver to overcome.

Red Bull Ampol Racing did win a seventh straight race, though for the first time it was Jamie Whincup won the race while van Gisbergen had to settle for second. Cameron Waters left Tasmania empty handed after starting all three races from the front row of the grid, while Chaz Mostert broke through for a maiden victory with WAU. The result witnessed by a most welcome sea of spectators after the empty paddocks of 2020.

Cameron Waters held pole position from Jamie Whincup at the start of race 7 and out-dragged the Red Bull Ampol Racing machine into turn 1. De Pasquale was slow off the line from the second row and came under attack from Jack Le Brocq on the approach to the hairpin. A touch between the pair saw De Pasquale spin at the exit and Le Brocq spear to the outside of the corner where he also spun after contact from Heimgartner. Cars weaved either side of the stationary pair with Bryce Fullwood and Brodie Kostecki both forced onto the grass verge on the inside of the track as cars swerved to avoid Le Brocq. 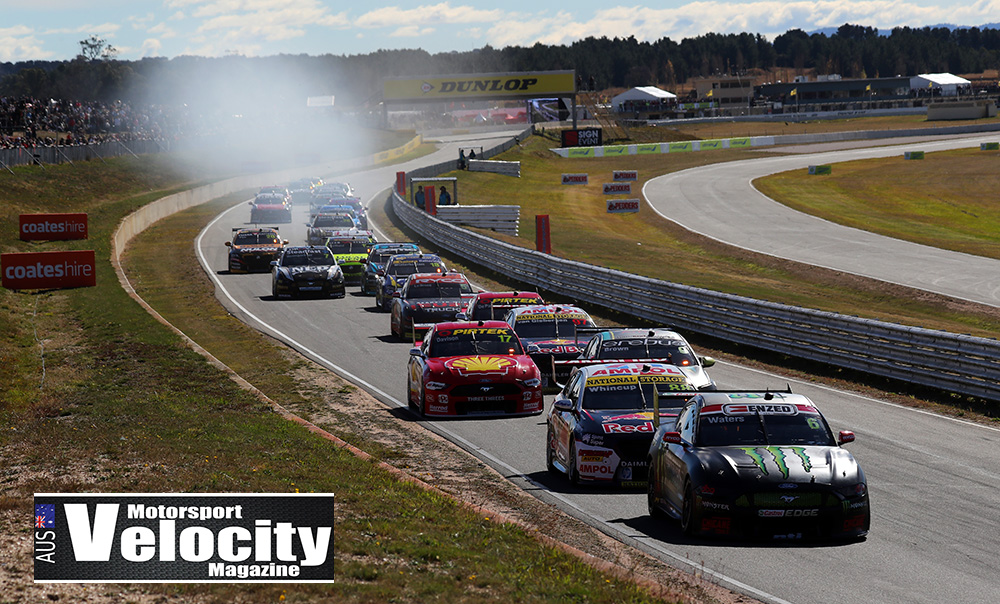 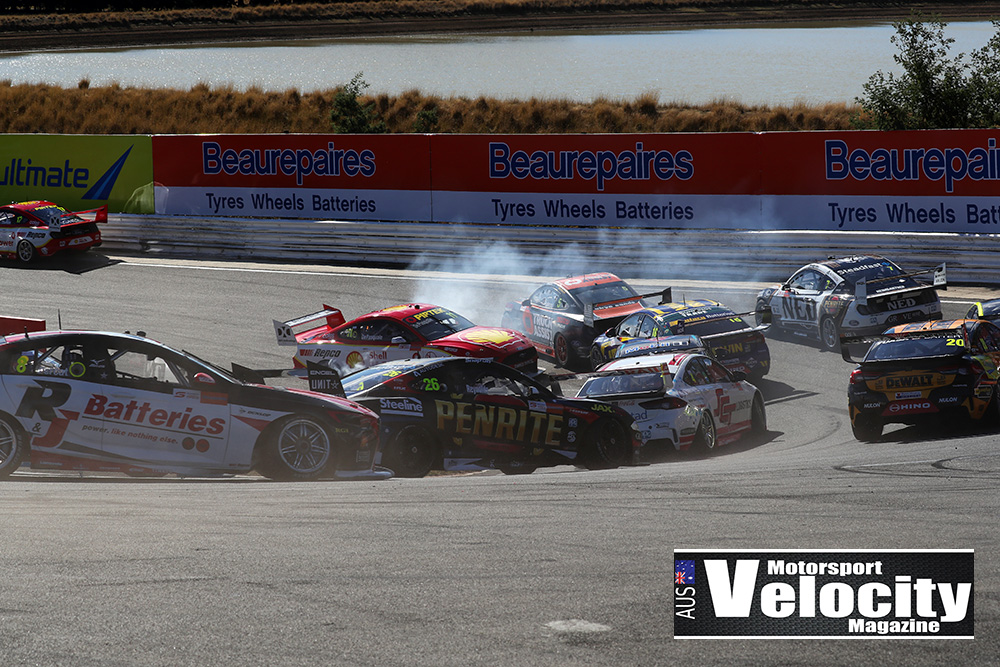 The off track excursions continued into the second lap when James Courtney and Jack Smith slide sideways towards turn 2 and both found themselves churning through the gravel trap. Waters led the race from Whincup, Brown, van Gisbergen, Davison, Winterbottom, Mostert, Heimgartner, Pye and Reynolds. Coulthard returned to the garage with damage to the left rear of the Local Legends sponsored Commodore on lap 2 with the crew examining the left rear suspension.

Waters handed the lead to Whincup from van Gisbergen when the Monster Energy Mustang peeled into the pitlane for the scheduled stop on lap 14, while Whincup stopped some 5 laps later and shuffled back onto the track some 20 metres behind Waters, who remained the effective race leader. Whincup hounded the #6 Mustang and made a late dive under brakes at the hairpin. The pair emerged side-by-side on the run to turn 6 with both cars pushing for position. Whincup held the inside line and took the effective lead as van Gisbergen made his stop on lap 27. Will Davison took advantage of the confrontation ahead to close on Waters as while van Gisbergen returned to the race just behind the #17 Shell V-Power Mustang. Van Gisbergen moved past Davison at the hairpin on lap 30, then took second from Waters in a similar move a lap later. It was less tidy than the pass on Davison as the #97 Red Bull Ampol Racing Commodore forced Waters high on the exit of the corner. The delay allowed Davison to drop the Monster Energy Mustang off the podium.

Jamie Whincup became the first driver other than Shane van Gisbergen to win a race in the 2021 Repco Supercars Championship from van Gisbergen and Will Davison. Waters, Brown, Mostert, Winterbottom, Reynolds, Pye and Heimgartner completed the top 10.

“It’s a good feeling to get the win of course,” Whincup exclaimed to Garth Tander from Fox Sports. “This bloke beside me (Shane van Gisbergen) has had a shocker, he’s come in second. The car was great but didn’t quite get the start I’d like but we had slightly better tyre life than Cam (Waters). We got past and SVG came at us at the end but we had just enough to hang on. Race win #123 and it keeps getting better. I’m not sure how many wins I can establish this year but I can guarantee you that I treat each one like it’s the last.”

Shane van. Gisbergen couldn’t help but take a swipe at reports of a parity issue with the Mustang after qualifying in 6th for the race. 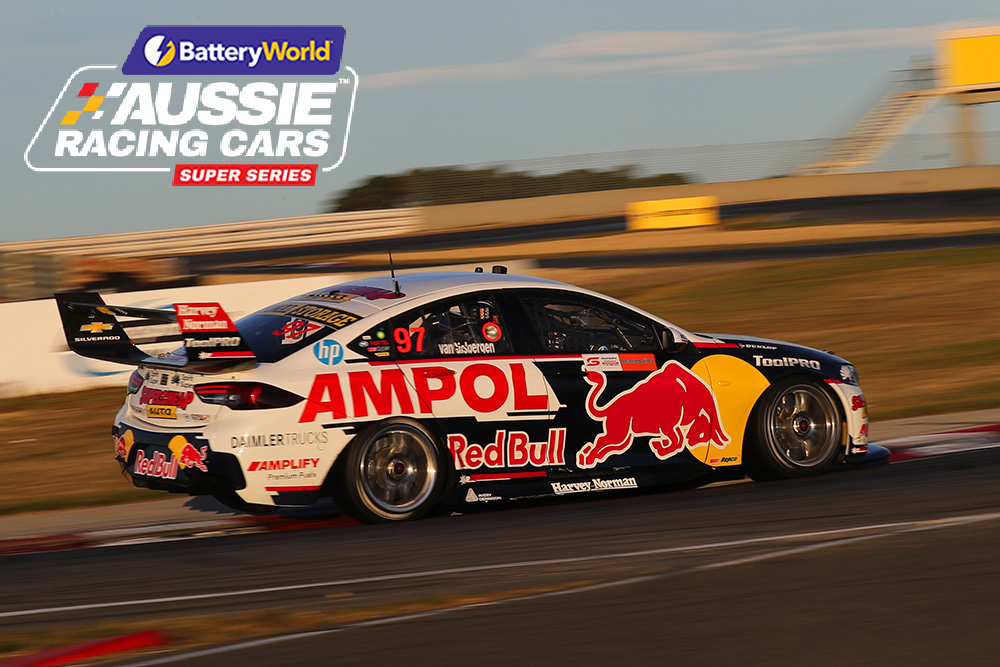 “With our bad parity we had a poor qualifying,” van Gisbergen remarked to Fox Sports. “But what an awesome race! Some good moves coming through and another team 1-2 for Red Bull Ampol Racing. So great for Jamie to get his first win of the year and for us as well. There was a few good passes there and I hope that it was cool to watch. We’ll have some bad tyres for the start of the next one but hopefully the others will as well, see where we end up.”

Cameron Waters was once again on pole for race 8 with Chaz Mostert alongside this time. Mostert literally flew off the line from second and led Waters, De Pasquale and Zane Goddard into turn 2. Davison made it a Shell V-Power 3-4 shortly after touching panels with Goddard under brakes for the hairpin, while Whincup also briefly looked to follow Davison through then settled back behind as the leaders snaked towards turn 6 on the opening lap. Mostert and Waters quickly established a small gap to De Pasquale, who had Davison. Goddard, Whincup, van Gisbergen, Reynolds, Brown and Courtney as the field began to settle until the opportunity arose to fit fresh rubber during the compulsory pit stop. With so many cars starting on well-worn rubber it was really no surprise to see pit stops start from lap 9 of 44, with van Gisbergen, Reynolds and Brown amongst the early stoppers.

Davison and Whincup stopped on the following lap, while Waters and De Pasquale made their stops the next time around. Mostert took his stop on lap 13 after finding himself behind the Ned Mustang of Andre Heimgartner. The WAU Commodore returned to the circuit with an even greater lead over the Monster Energy Mustang. The top 10 remain largely unchanged after the pit stop cycle with Mostert edging away to an 8 second lead by lap 33. The main battles lay further down the order with Winterbottom, Brown and Percat trading paint as they jostled for position. Percat capitalised on contact between the Erebus and Team 18 Commodores to leapfrog into 10th place.

The race for the minor placings came alive over the final three laps of the race as Waters fell into the clutches of De Pasquale, Davison and van Gisbergen, who had been waved past by Whincup a few laps before. With his rear tyres well past their prime Waters had difficulty in maintaining a fast line through the turn 4 hairpin and became easy prey for those behind at turn 6.  De Pasquale took the inside line at turn 6 won lap 42, while Davison followed his teammate with the same move on the penultimate lap. Shane van Gisbergen looked to take 4th but dropped a place to Whincup after running wide at turn 6. Mostert took his first win for Walkinshaw Andretti United from De Pasquale, Davison, Waters, Whincup, van Gisbergen, Goddard, Reynolds, Courtney and Percat. 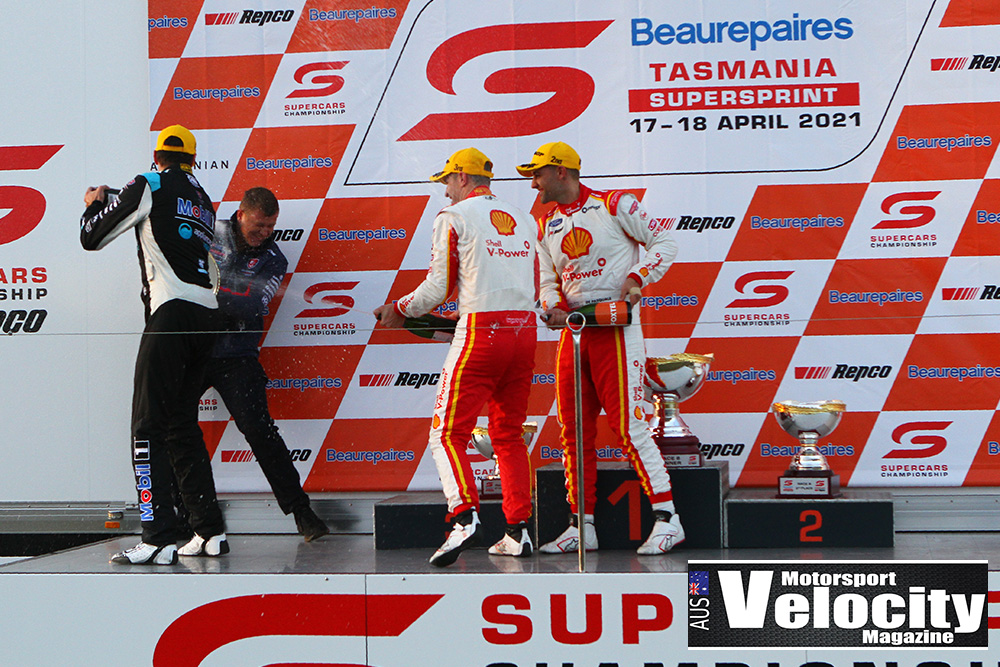 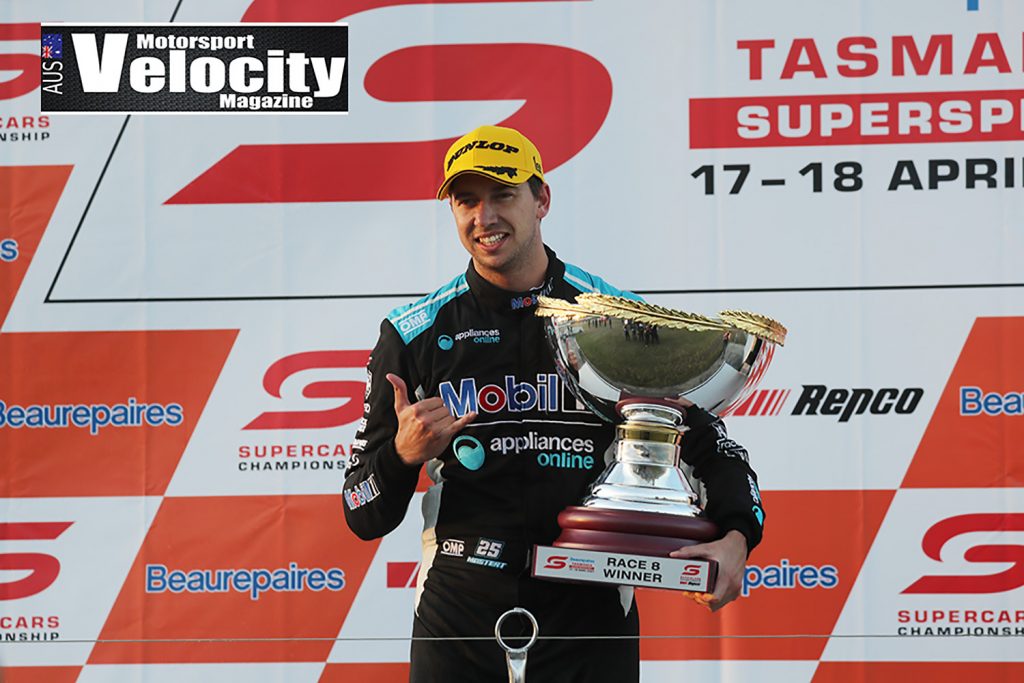 “It’s been a long time for the first place in Supercars for me personally,” Mostert admitted to Fox Sports. “I was starting to believe that I couldn’t do it for a long time. I’m super stoked for the team, we’ve been on or about the pace all weekend but that car in the last race was a lot of fun in clear air. Thanks to the WAU guys, the Mobil 1 was a rocket and I’m so happy to finally get the monkey off our back for the team. We struggled a bit with the tyres in race 1 and 2, so we ran a different tyre strategy in that last one and I think we might have missed the mark in the first two.”