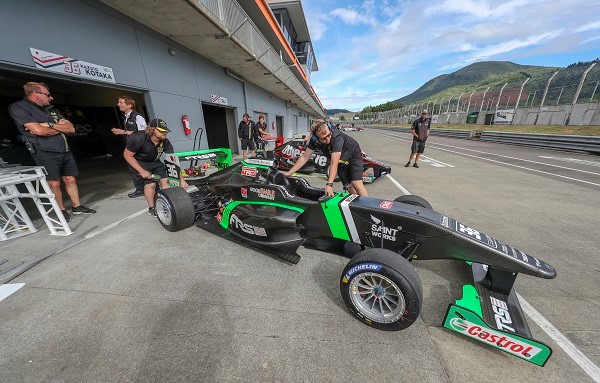 Australia’s next Formula 1 superstar could be discovered within the ranks of the AMRS, according to one of the country’s most respected open-wheel team owners and talent scouts.

Bruin Beasley, who has a distinguished history as a championship-winning team owner and manager over more than three decades, says drivers as young as 14 have the unique opportunity to make their first foray into “wings and slicks” racing through the Invitational Class of the Australian Formula 3 Championship.

While the F3 Championship is best-known for its F3-spec cars, other open-wheel race cars from categories such as Formula 4 and the New Zealand-based Toyota Racing Series (TRS) are eligible for competition within the Invitational Class. Beasley has imported some TRS cars to Australia and is encouraging drivers with overseas ambitions to get behind the wheel.

“Up until now, 14-year-olds haven’t had a suitable pathway to progress from karts to a wings-and-slicks open-wheel category within Australia,” Beasley said.

“The AMRS and F3 Championship are now perfectly positioned as the country’s home of junior open wheel racing. Rising stars are able to learn the nuances of the cars in a competitive racing atmosphere where there are factors like starts, battles for track position, Safety Cars and changing track conditions.”

“In recent times, we’ve seen a number of Aussie drivers who have pursued the overseas open-wheel dream, such as Oscar Piastri, Alex Peroni, Marcus Flack and Hugh Barter,” Beasley said.

“The reality is that these drivers had no open-wheel experience at 14, because there simply wasn’t a local open-wheel category that provided them with a sound platform to take on Europe at 15.

“The AMRS and F3 Championship Invitational Class provide that platform and the TRS cars are ideal for junior drivers making their first foray into circuit racing from go-karts.”

Beasley said the AMRS strikes the right balance between exposure and pressure, as well as accommodating drivers at a young age.

“It’s important to have a pathway for junior drivers to make the step into cars at as young an age as possible, to bring Australia in line with what happens overseas; by allowing 14-year-olds to race, the AMRS achieves that goal,” he said.

“As a national series, the AMRS is professionally managed and there are features like the live-streaming package, which allows aspiring racers to earn recognition and provide a value proposition to potential sponsors.

“At the same time, there’s not the burden of expectation or the massive pressure of heading straight to Europe and competing in a cut-throat open-wheel category without the proper preparation. I’ve seen talented drivers do that in the past and it has done their careers more harm than good.”

Having worked with such an illustrious list of drivers, Beasley is well qualified to recognise talent and said he is willing to assist those with potential.

“Many of my mechanics and engineers have worked for some of the top European teams, so we’re able to open doors and create opportunities for those who demonstrate their abilities,” he said.

“We’ll be aiming to get some drivers into the TRS cars, we’ll work closely with them and we’ll do all we can to help them pursue their international racing dreams.”

AMRS manager Matt Baragwanath is excited about the series providing a springboard for stars of the future.

“The Australian Formula 3 Championship, including the Invitational Class, provides an avenue for those who want to learn their craft in open-wheelers and potentially pursue a professional career in Europe or America.”

Parties interested in competing in the Australian Formula 3 Championship Invitational Class in a TRS car can contact Bruin via email – bruin@mtecmotorsport.com.au.

The next round of the Australian Formula 3 Championship will be held as part of the next AMRS round at Winton Motor Raceway, 11-13 June.

Welcome to the 2021 AMRS Round 1 Sydney Motorsport Park Photo Gallery, our images are…

MAGNOLIA CAPITOL TO SPONSOR ROUND ONE OF AMRS 2021