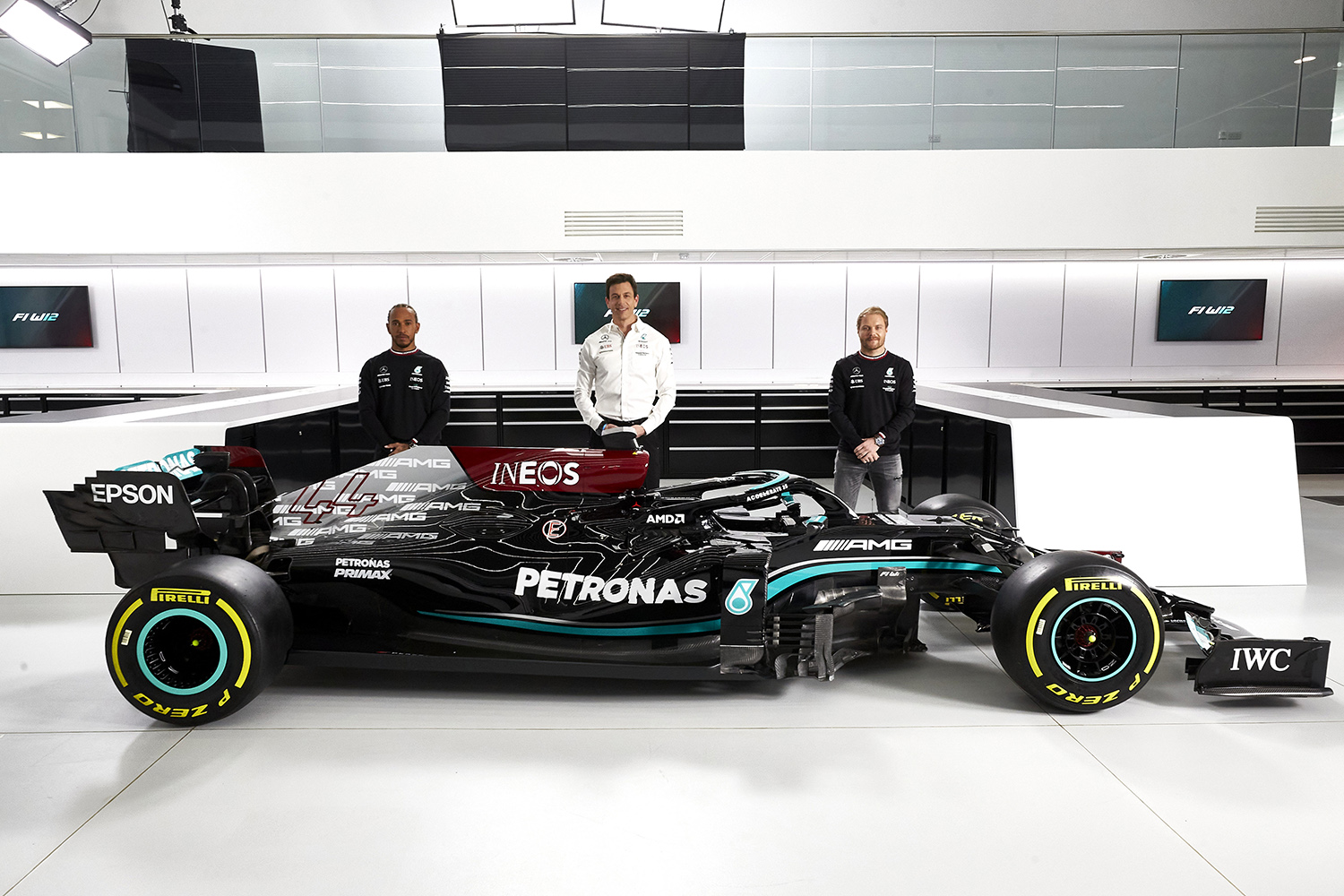 Just 12 weeks after the chequered flag fell on the 2020 Formula One season, the Mercedes-AMG Petronas Formula One Team has officially revealed its challenger for the 2021 season. The Mercedes-AMG F1 W12 E Performance is presented today in the brand-new Race Bays at our Brackley technical centre, officially opening a cutting-edge facility that has been created over the past 18 months.

The factories have been a hive of activity over the winter, as team members searched for new solutions, opportunities and improvements in their hunt for performance. Long days, late nights, tough decisions and intense deadlines – the combined and collective effort of every member of the team, coming together to ensure W12 is ready to hit the track on schedule.

“Every year we reset our focus and define the right objectives,” said Toto Wolff. “That may sound simple but it’s damn hard and is probably why there are no sports teams out there with seven consecutive titles. So many things can happen and it’s very natural to get used to success, and therefore not fight as hard for it.

“But this team has not shown any of that. I see the same fire, hunger and passion now as I did the first time I walked through the doors in 2013. Every season presents a new challenge and therefore, a new goal for us to achieve. 2021 brings changes to the regulations, which could impact our competitiveness, plus the cost cap and working on the major rule changes of 2022. These challenges excite us.”

The team’s closer cooperation with AMG is also reflected in the new 2021 livery, with AMG branding replacing the star pattern on the engine cover which now fades to Mercedes’ traditional racing silver from the black base livery introduced in 2020. The most prominent colour remains the iconic green of Title Partner PETRONAS on the front and rear wings, nose, mirrors and halo, with the parallel green and silver stripes on the flanks of the car symbolising more than a decade of partnership between Mercedes and PETRONAS. The visual identity is completed by the burgundy of team shareholder and Principal Partner INEOS, which features on the airbox and the inside of the front wing endplates. The result is a striking and distinctive look for the season ahead.

This season also marks the beginning of an exciting new chapter for the team following the announcement late last year that Toto, Daimler and INEOS will be one-third, equal shareholders.

“The fact that we were able to attract INEOS as an investor shows that we have a strong business case and that F1 continues to be a highly attractive platform for big brands and companies,” said Toto. “We’re also seeing a slight shift in the way that F1 teams operate as the cost cap and the new structure move us towards a business model that is more familiar in American sports franchises.

“At the same time, having three strong shareholders in the team gives us even more stability for the future. On a personal level, I’m very happy to commit to the team for the long term and increase my share slightly. I’ve always said that this team is like a family to me, and I’m incredibly proud of what we have achieved together.”

We enjoy stability in the team’s driver line-up for the 2021 season with Lewis and Valtteri entering their fifth season as team-mates. Both are looking forward to getting back in the cockpit after the winter break, which included intense winter training programmes.

“The launch day of a new car is always a really exciting one,” said Lewis. “It’s great to reveal to the world the result of everyone’s hard work at the factories and to see some of my team-mates in person, which has been so rare during the past year. I’ve been in touch with the engineers through the winter, keeping track of their preparations as I prepare myself for the season ahead. The excitement has been building and building, so now I just can’t wait to get out on track in the W12.”

“Obviously we haven’t been able to visit the factory much in the past year, so firstly, I’m really happy to be back here and to see the new car in person for the first time,” said Valtteri. “I’ve been getting regular updates on how things are progressing, so it’s nice to now be able to see the end result in the flesh and that just gets me more fired up for the new season. The cars are pretty similar to last year but there are some interesting aero changes that will have an impact on how the car handles and performs, so I’m looking forward to seeing how it feels on track in Bahrain.”