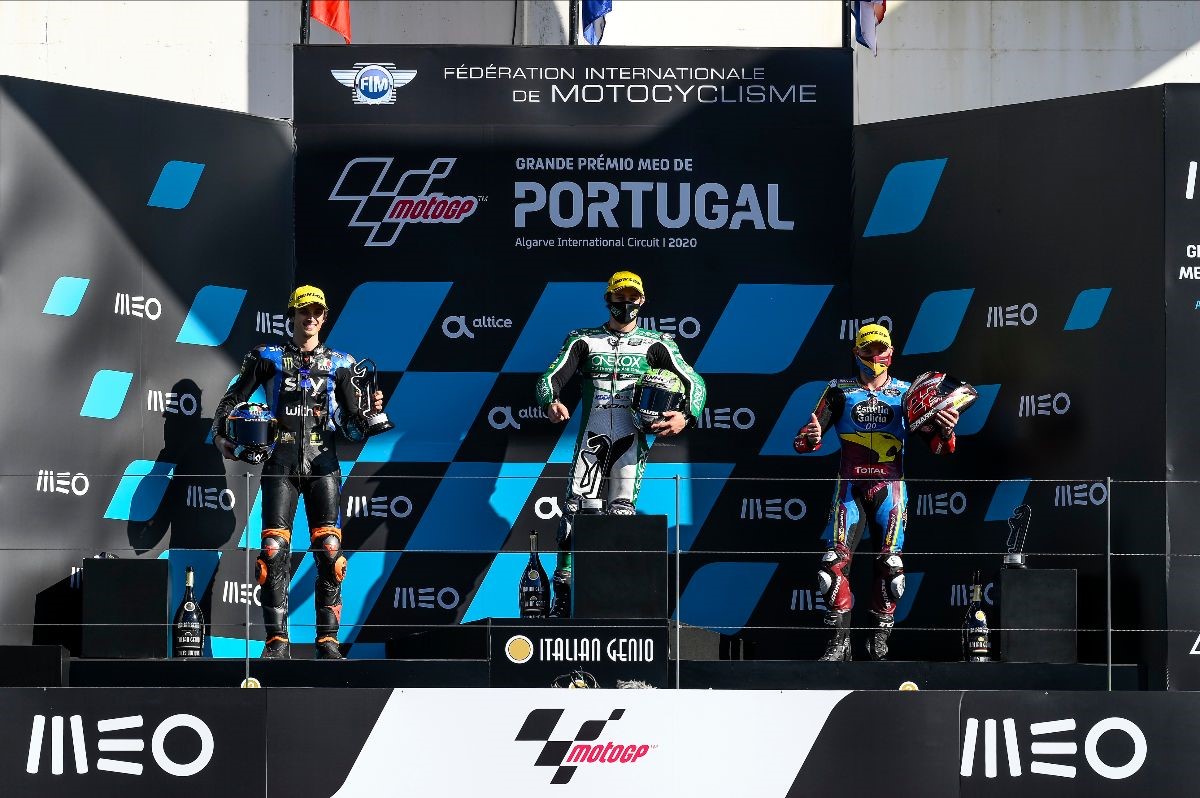 The Australian puts in a stunner to stand on the top step, ahead of Lowes and Marini – but the ‘Beast’ gets the job done in fifth.

Remy Gardner (ONEXOX TKKR SAG Team) is now a Grand Prix winner! The Australian rode the season finale to perfection in the Grande Premio MEO de Portugal, coming out on top as he beat Luca Marini (Sky Racing Team VR46) with a well-pitched move late on. Marini took second and with it second in the World Championship, with Sam Lowes (EG 0,0 Marc VDS) riding through the pain barrier to an incredible third place. It wasn’t enough, however, as Enea Bastianini (Italtrans Racing Team) put in a calm and clear-headed ride to fifth and with that, crowns himself the 2020 Moto2™ World Champion.

As the lights went out and the title showdown got underway, Marini, from second on the grid, took the holeshot with Gardner taking second from pole. Bastianini, meanwhile, came through to third from the second row, whilst there was a nightmare start off the front row for Fabio Di Giannantonio (Beta Tools Speed Up). Things got even worse for the man that lost victory on the final lap just one week ago when he tucked the front at Turn 1, taking Nicolo Bulega (Federal Oil Gresini Moto2) with him.

Marini was then shuffled back to third on the opening lap when he hit a false neutral out of Turn 5, and the first lap was completed with The Beast in control in terms of the title as he sat second with Marini in third, Lowes in fifth and Marco Bezzecchi (SKY Racing Team VR46) down in seventh. Gardner was starting to check-out at the front of the race, early doors taking a second out of the chasing pack with only three laps completed. The adrenaline was then clearly starting to kick in for Lowes as the battered and bruised Brit muscled his way ahead of Jorge Martin (Red Bull KTM Ajo) to move up to fourth.

Marini then made his move on Bastianini at Turn 1, and Lowes would follow him through too, squeezing past the Championship leader to push the Italian back to fourth in the space of half a lap. Marini and Lowes knew they had to chase down Gardner at the front of the race to stand any chance of being crowned World Champion and that’s exactly what they set about trying to do. In the space of a lap, the advantage had been cut from a second down to just six tenths. Meanwhile, Lowes was getting a helping hand from EG 0,0 Marc VDS teammate Augusto Fernandez as the Spaniard had a big look up the inside of Bastianini, then getting the job done to push him back to fifth.

Bastianini battled back but it didn’t last long, with Fernandez finding a way back through. The pair’s squabbling over fourth saw them lose touch with Marini and Lowes ahead of them too, who themselves had latched onto the rear tyre of Gardner. The pair made quick work of the Australian too, both slicing their way through in the space of a sector and suddenly, with eight laps completed, the top three in the World Championship were split by just five points.

Fernandez was now causing problems for Gardner, who was starting to slip backwards, and the Spaniard was fully committed as he dived through on the Australian to take third place. Meanwhile, another lap ticked by and another place was lost by Bastianini as Bezzecchi started to do some favours for his own teammate, Marini, as he moved through and Bastianini was demoted to sixth.

A mistake from the ‘Beast’ then also allowed Red Bull KTM Ajo’s Jorge Martin to squeeze through as well. That put the Italtrans man down in seventh and the top three in the Championship were now even tighter, just three points split them in an unbelievably tense finale. Bit by bit though, the ‘Beast’ was clawing his way back and first to go was Martin. Lowes was also starting to fade ever so slightly, his hand injury starting to take its toll. From being right on the rear wheel of Marini, the Brit ran wide and allowed Gardner to pick his pocket and take second.

With that, Gardner seemed to suddenly be back in his groove and chasing down Marini at the front of the race. The Australian, gunning for a career-first intermediate class victory, was right on the tail of the Championship contender with only seven laps remaining, and with some incredible pace. Lowes wasn’t out of it though, only half a second adrift of the leading duo and hanging in there. Soon though, both Marini and Lowes’ hopes took a severe dent as Bastianini got back past Fernandez for fifth.

A mistake from Lowes then saw him lose some touch with Gardner and Marini, but the towel was far from thrown in in. Somehow, the Brit gritted his teeth to set the fastest lap of the race with four to go. By two laps to go though, Lowes was a second adrift and it started to come down to praying the two would duel.

Right on cue, Gardner pounced and Marini wasn’t happy to sit behind him, trying to fight back to sit side-by-side with the Australian, who kept it pinned to hold on. It worked, and Gardner almost immediately opened out half a second. As he entered the final lap, he had pretty much ended both Marini and Lowes’ dreams of becoming Moto2™ World Champion as Bastianini held firm in fifth. Keeping it calm, the Australian came out of the final corner and took the chequered flag to clinch his first Grand Prix victory, emulating father and MotoGP™ Legend Wayne Gardner.

Marini did all he could, eventually having to settle for second and second in the World Championship. Lowes made it a hero’s ride through the pain barrier for third in the title fight and able to take a podium finish to end a remarkable 2020. Bezzecchi crossed the line in fourth, not quite enough for the Italian to challenge for the podium, and then came Bastianini.

With his solid fifth place, the ‘Beast’ was crowned the 2020 Moto2™ World Champion, wrapping up a sensational season before he moves to the premier class next year. Ahead of him, Bezzecchi was given a huge hug by his SKY Racing Team VR46 squad for taking fourth, the Italian now focussing on being crowned Moto2™ Champion this time next year… where Lowes and Gardner will be two of the men waiting to race him for it.

Martin took sixth after holding off a hard-charging Joe Roberts (Tennor American Racing), the Spaniard saying farewell to the class and the American his team. Fernandez eventually slipped back to eighth after being in podium contention during the early running of the race. The final places inside the top ten were taken by Lorenzo Baldassarri (FlexBox HP 40) and Xavi Vierge (Petronas Sprinta Racing).

Aron Canet (Pull&Bear Aspar Team) wrapped up Rookie of the Year as Hector Garzo (Flexbox HP 40) crashed out,  Canet increasing his advantage by a point as he came home 15th.

Another incredible season of Moto2™ action comes to a close then, with the top three in the World Championship covered by only nine points as the curtain falls. The top two move on to MotoGP™ in 2021 but there’s a whole host of talented youngsters ready to step up and stake their own claim on the crown next year – and the likes of Lowes and Gardner waiting for even more. 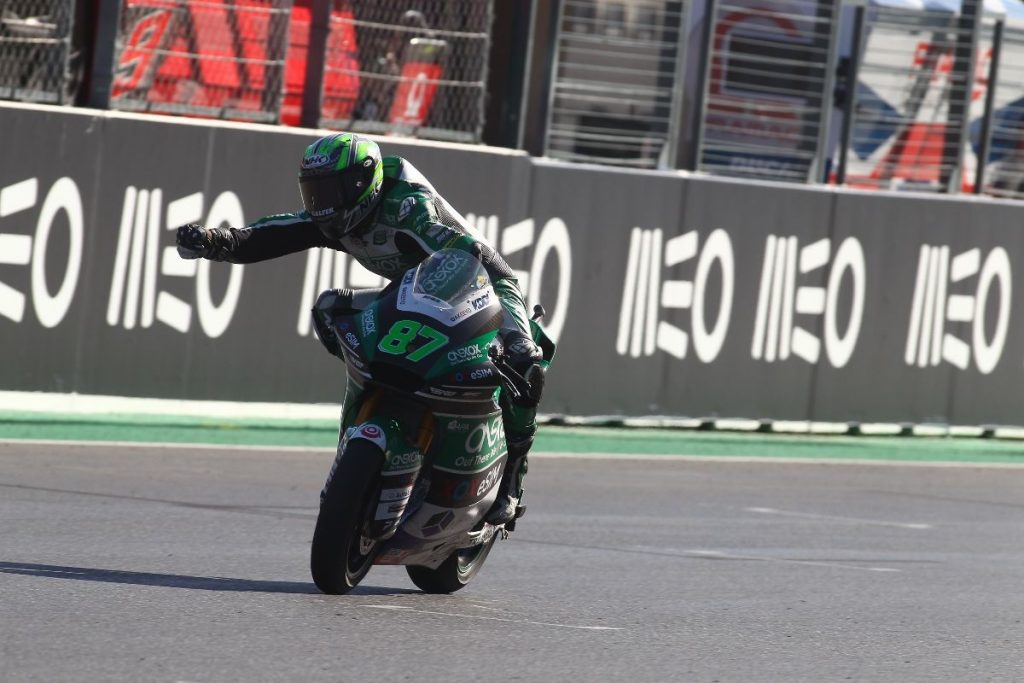 Remy Gardner: “My first ever win, you know I’ve had a few tough years in Moto3 and Moto2, I’ve had a few podiums this year and last year but the win has always eluded us. I worked on myself really hard last winter and this year as well. The team has done an amazing job this year to give me a really competitive package. We came to a track I really love and we managed to win! I still don’t have words, I’m still on cloud nine at the moment – it still needs to sink in. Extremely happy, a great way to end the season and hopefully this is a glimpse of what’s to come next year.”

A SCARY CRASH FOR ARON BARBERO AT THE PORTUGUESE MOTOGP