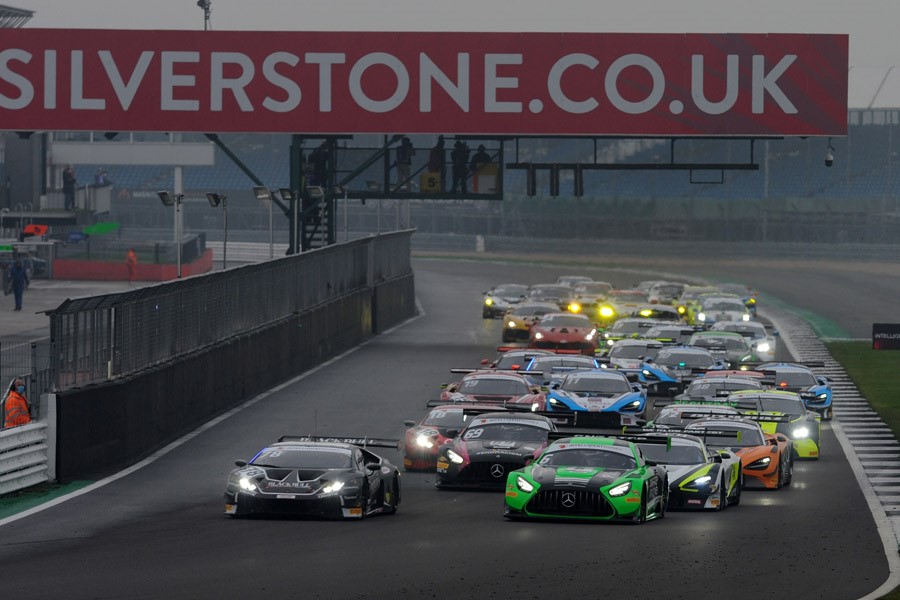 Lamborghini clinched the 2020 British GT Drivers’ and Teams’ titles courtesy of Barwell Motorsport’s Sandy Mitchell and Rob Collard, who took victory in the season-closing Silverstone 500 race. Mitchell and Collard started the weekend on the right foot by claiming pole position for the three-hour race, ahead of their title rivals Patrick Kujala and Sam de Haan in the Ram Racing Mercedes, as well as the sister Barwell Motorsport Lamborghini Huracán GT3 Evo of Phil Keen and Adam Balon.

Collard got a strong getaway off the rolling start and led the early stages before a superb strategic call from the team to pit during the first safety car period, allowed the British Touring Car Championship veteran to hand over to Mitchell and retain the overall race lead at the restart. Mitchell maintained the lead out front but gave way to Keen in the #72 Huracán, who was on fresher tyres after a few laps. Keen began to leap away at the front, setting a number of fastest laps ahead of the first round of pit-stops.

The key difference between the two Barwell cars was that Mitchell and Collard did not have to serve a success time penalty at their third and final stop. In any case, Balon and Keen were left to rue another missed title opportunity after Balon was spun around at Stowe by de Haan in the closing stages. Mitchell and Collard stayed out of such trouble and duly came home to take the race win as well as delivering not just the overall Drivers’ and Teams’ titles, but also Silver Cup class honours as well.

Scotsman Mitchell was particularly strong in navigating through traffic, and it was this attribute which cemented the #78’s lead after the last round of stops with 25 minutes remaining. Mitchell rejoined just in front of the chasing McLaren of Michael O’Brien, on fresher tyres, but Mitchell managed to get his Pirelli tyres up to temperature while also extending his margin to over three seconds as he worked his way past GT4 backmarkers.

The victory and title success caps off an immensely successful 2020 season for Mitchell and Collard, who claimed Pro-Am class victory at the Spa 24 Hours last month alongside Rob’s son Ricky and Leo Machitski. Their maiden British GT season together has also been a model of consistency, with the pair securing two wins and finishing every race inside the top five. It also marks Lamborghini’s 16th British GT race victory since its arrival in the championship.

While Keen and Balon missed out on the title, their ninth-place finish helped Barwell Motorsport claim the Teams’ championship crown, while WPI Motorsport rounded out another promising year with sixth in the hands of Michael Igoe and Lamborghini Factory Driver Andrea Caldarelli.

Sandy Mitchell (#78 Barwell Motorsport Lamborghini Huracán GT3 Evo): “Awesome, we’ve worked so hard this year and Rob has done an amazing job, so has everyone at Barwell. We’ve really stuck in and Barwell has come really close in previous years as everyone in British GT knows. It’s unreal to be able to get the overall win and to top it off, getting the win today is incredible. I can’t thank everyone enough; we now get to go home with a big trophy. Our Lamborghini was on it all day today, we went long in the first stint and I was able to get some fresh tyres at the end and push on.”

Rob Collard (#78 Barwell Motorsport Lamborghini Huracán GT3 Evo): “I would never have believed it [a year ago], it’s a credit to Sandy, he’s taught me a lot this year. I came into British GT this year thinking I was a good driver, but I really struggled at the start of the season, so I had to learn a lot. They say you can’t teach an old dog new tricks, but it can be done. Sandy has really helped me learn how to get my skills up there in a GT3 car with aero. It’s been absolutely fantastic to race with Barwell this year, a dream come true. 2021 here we come!”