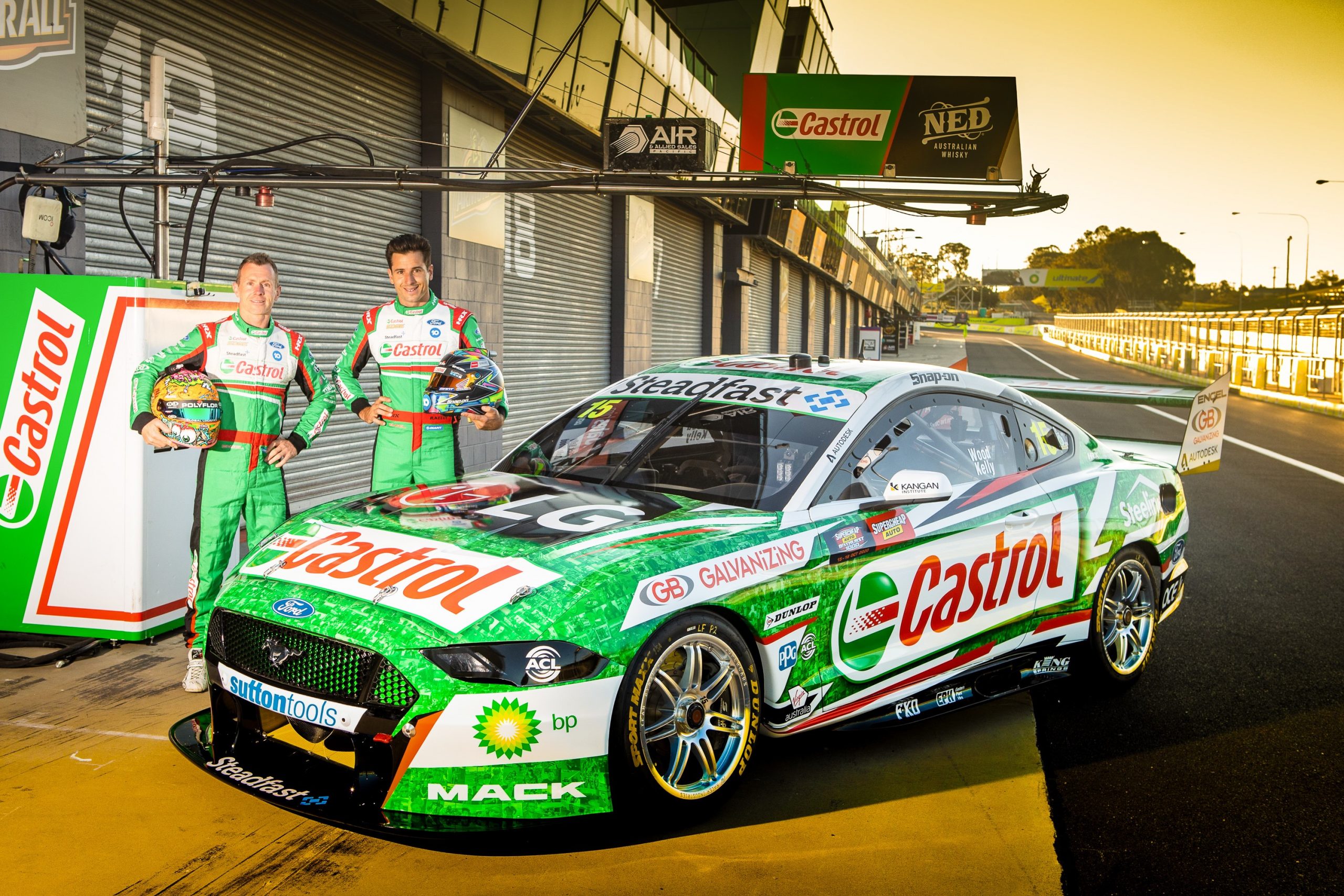 Kelly Racing and Castrol unveil an incredibly special livery that brings together thousands of Supercar fans to help celebrate Rick Kelly’s 20th Bathurst 1000 start. After making his Supercars Bathurst 1000 debut back in 2001, this Sunday Rick will start his 20th Great Race and in typical Castrol and Kelly Racing style the team has involved the fans in a unique celebration.

2020 has been an extremely challenging year for many people and while the team is incredibly fortunate to have the opportunity to go and race at the mountain this year, it won’t be the same without all of the diehard campers lining the circuit across the top of the mountain.

Typically at Bathurst Kelly Racing and Castrol would bring the car to the community, but this year that wasn’t achievable so the team brought the community to the car with over 1000 fan faces covering the Castrol Mustang.

During the month of September, fans submitted their photos and selfies to be included in a special Castrol Racing livery by uploading them to social media using the hashtag #RideWithCastrol.

The whole team was overwhelmed with the support and positivity which was spread across social media as hundreds of fans submitted their photo to Ride With Castrol and secure their position on Rick’s Bathurst race car.

The unique livery was put together by Kelly Racing’s graphics department in conjunction with the team’s vinyl graphics and paint partners Graphic Art Mart and PPG. The final livery is a unique version of the core Castrol Racing Mustang livery with all of the green on the vehicle emblazoned with the hundreds of fan photos that were submitted. In total there are approximately 1000 individual faces across the entire livery of the car. 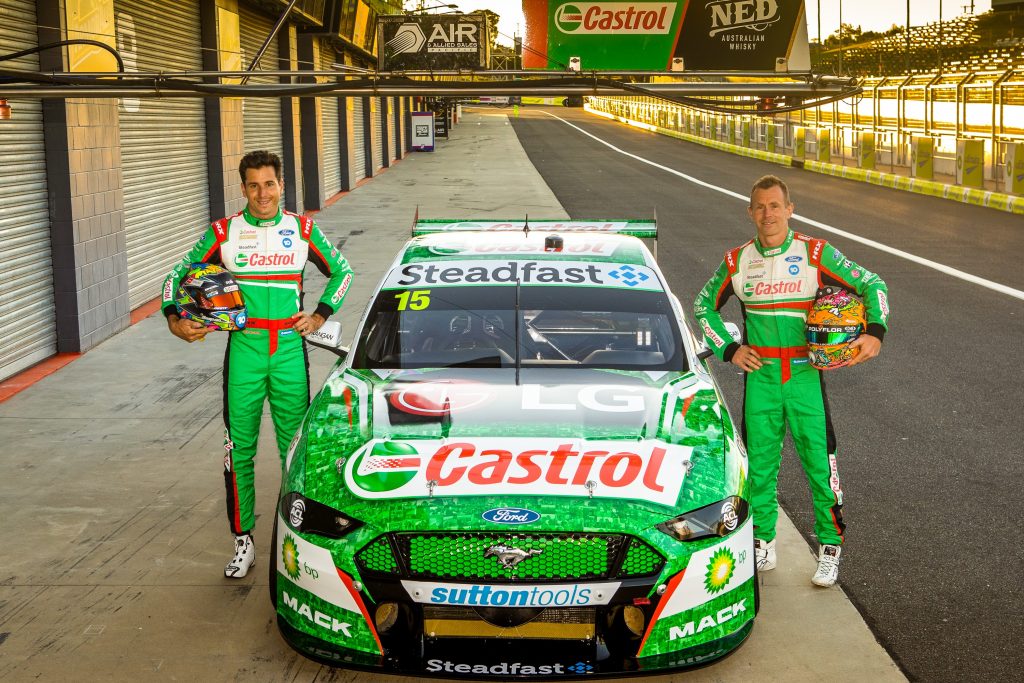 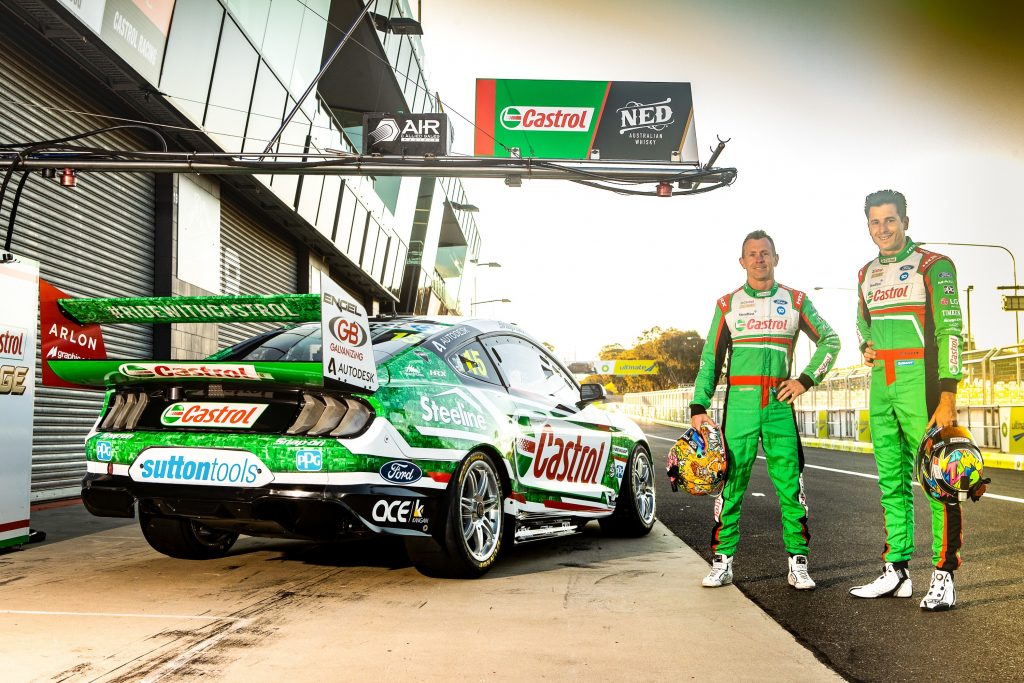 The photos include front-line workers who have battled bushfires and COVID this year, track officials, the team’s loyal fans, the team’s supportive partner network and of course the Kelly Racing crew and their families that have given up so much in order to keep the team on track over the past few months. Even legends such as Larry Perkins, Russell Ingall, and Greg Murphy have their images featured on the Castrol Mustang.

As a thank-you to all Kelly Racing staff both travelling and based in Melbourne, a special graphic featuring the name of each team member also adorns the inside of Rick’s driver’s side door.

Keeping with current trends of everyone putting in and helping out, the Bathurst Castrol Racing Mustang livery was applied by the drivers that will race the car over the weekend – Rick Kelly and Dale Wood. 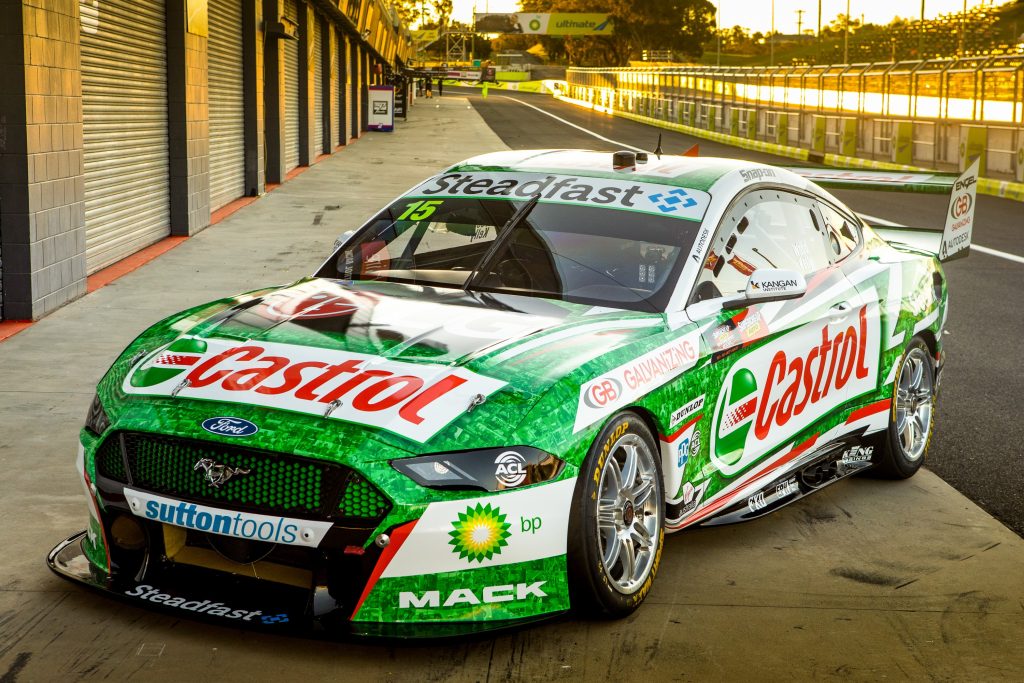 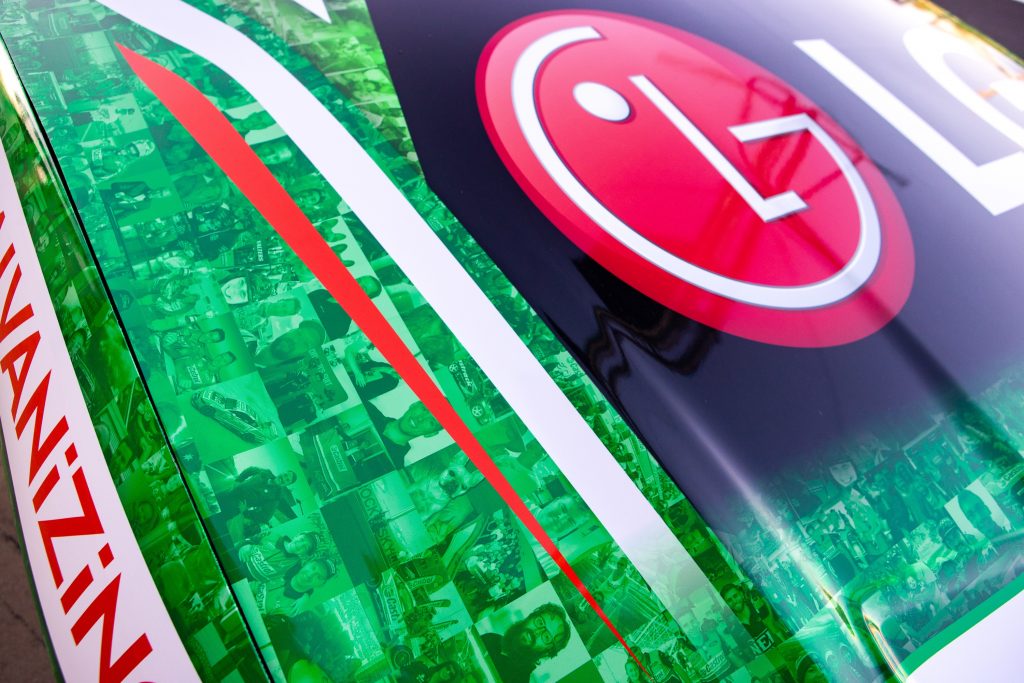 Both Rick and co-driver Dale are honoured to carry the thousands of Ride With Castrol supporters around the mountain for 1000-kilometers on Sunday and are looking forward to producing a strong result for everyone involved in the special livery.

“My 20th Supercars Bathurst 1000 start has been made even more special by this incredible fan-inspired livery that we’ve put together. I’m honestly blown away by the support that was shown from all of the fans with this livery, to have around 1000 fans ride with myself and Castrol at the mountain is fantastic and it’s a real honour for myself and Dale to represent them this weekend.”

“They come from all walks of life, some of them front-line workers doing it tough, others race fans that may be struggling, a lot of them would traditionally be here at the mountain cheering us on, but with the circumstances we know that wasn’t possible this year, so we wanted to involve them some how and bring them to the mountain and I think this livery is something we can all be really proud of.”

“The cool thing for me was that we included every photo that was submitted, it didn’t matter if you’re a big supporter of our team or anyone else in pit lane, if you wanted to join us this year and submit your photo then you’re on the car. There are also some really cool throwback images from back when I was quite new to the sport and a lot of selfies that people have taken with me at the track over the years which is awesome.”

“The other drivers need to be aware they can’t rub their tyres down the door anymore because you’ll be rubbing people’s faces off.” 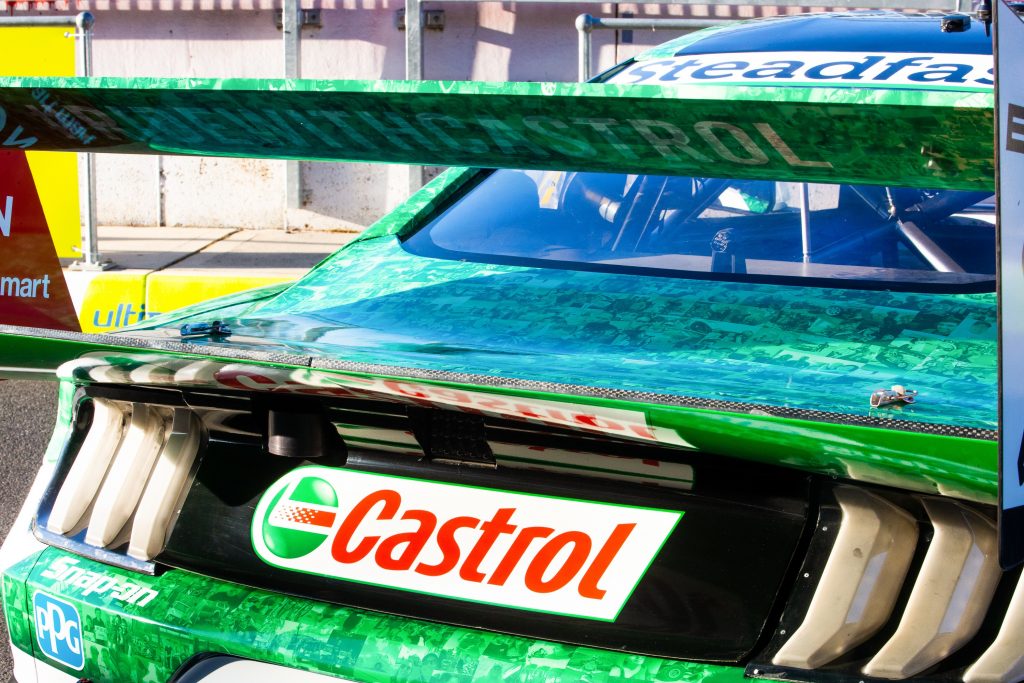 “Away from the race track my business is actually doing vehicle signage and I’ve done that for many years and never seen something like this. It’s awesome for me to come into the team with so much buzz and excitement around it. It’s a big week for us with it being Rick’s 20th start here, that’s a huge milestone, so it’s great to know we’ve got a lot of support behind us with these 1000 people that will be cheering us on no matter where they are.”

“Obviously Rick appears on the car quite a few times so I had to jump on and include a photo of myself on there too, it’s going to be a fun game trying to spot where I am on the car, hopefully I’m near Bert from BP – I heard that was pretty expensive real estate.”

“I’m really looking forward to driving the car, it’s obviously been a long time since I’ve been able to jump into a race car being based in Melbourne. I’ve definitely missed that sensation, so to be able to get a taste of it again at Bathurst, co-driving with my best mate, it’s going to be a pretty surreal feeling.” 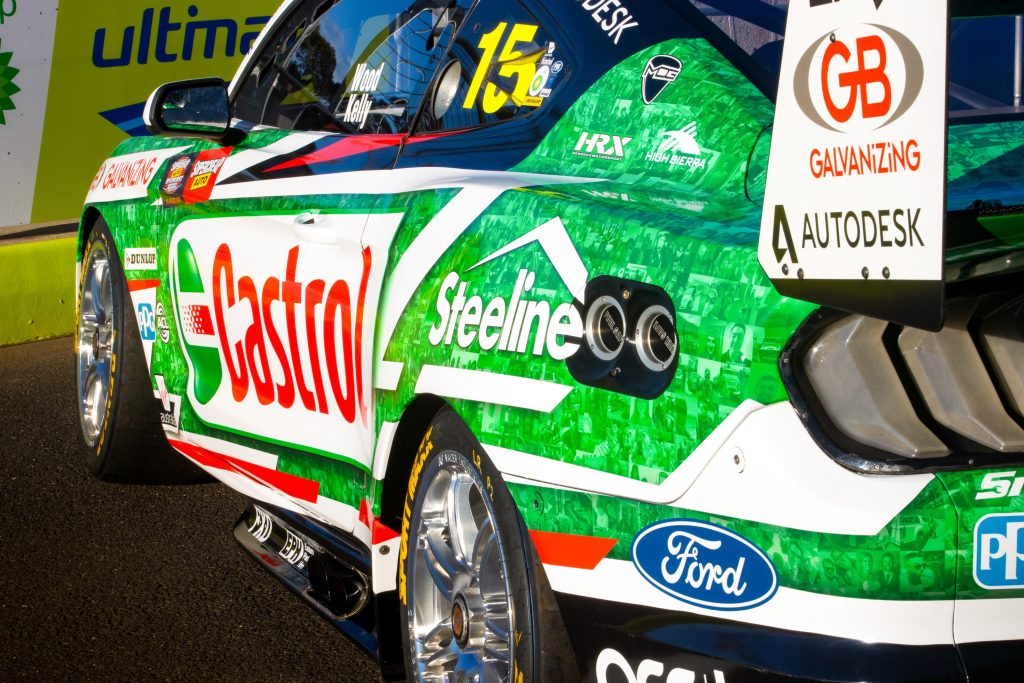 “Last year we unveiled the Castrol Racing Mustang at the top of the Mountain – surrounded by passionate Supercars supporters. With the nature of 2020 we obviously had to adjust and think outside of the box to reach out to those dedicated race fans, especially those who can’t make it to the track this year. 2020 has been exceptionally difficult for a lot of people across Australia and with thousands of fans not able to attend any race events, we decided to take our program a step further. Traditionally we have brought the car to the community but this year, we have put the community on the car. You will see the #RideWithCastrol as well as the faces riding through the Bathurst 1000 race event.”

“The Castrol Racing Mustang looks fantastic with thousands of fan faces riding with Rick, Dale and the team all weekend. It’ll be fantastic to see on track and we hope it brings some joy to those who’ve done it so hard this year – frontline service members, fans and the general public who are incorporated into the livery, giving them the recognition they thoroughly deserve.”

“Castrol would also like to thank Rick and congratulate him on his 20th Bathurst 1000 race. We were onboard with Rick for his first one back in 2001 and have enjoyed the journey over two decades – right up to our rewarding partnership with Kelly Racing today. We are so proud to be part of Rick’s and the team’s journey.”