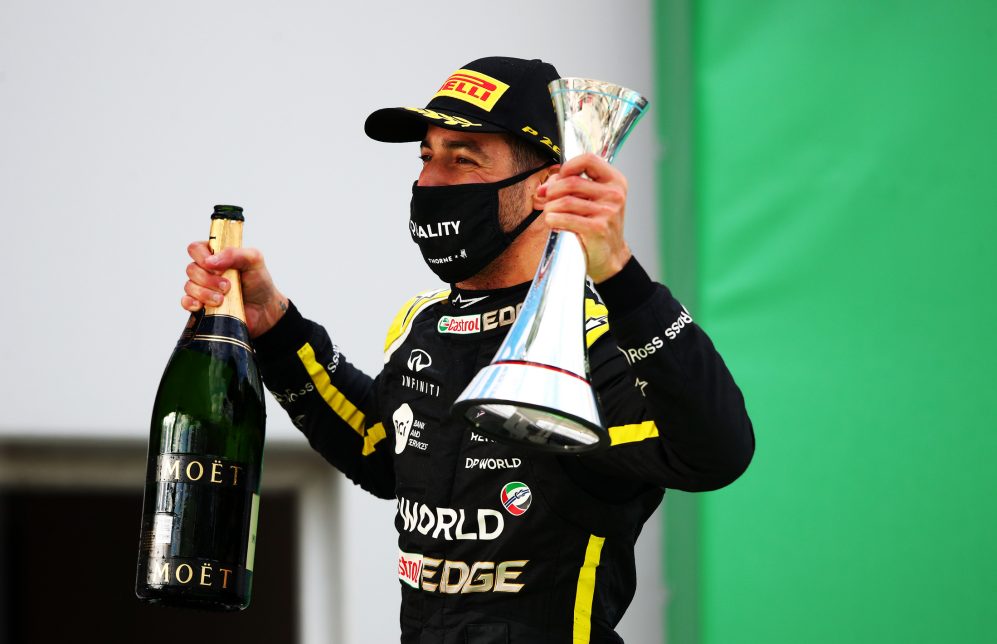 The rain stayed away from the Nürburgring for the 2020 Eifel Grand Prix, but cold conditions and a track temperature of just 17 degrees Fahrenheit presented their own problems for the field and raised questions about the predicted two stop tyre strategies for the race. It was also a day that marked another record, though this time it was not about Lewis Hamilton. Kimi Raikkonen started in his 323rd Formula One Grand Prix to beat the record previously held by Rubens Barrichello.

Valtteri Bottas led the field to the grid at the conclusion of the formation lap with Lewis Hamilton in P2. Both Mercedes sat on the grid with plumes of smoke wafting from the front brakes, that the drivers had worked hard on the formation lap. Hamilton made the better start as the lights went out and, even though Bottas tried to squeeze his teammate for room, led into turn 1. Hamilton repaid the Finn in kind by pushing him onto the run off area at the exit of the corner ahead of Verstappen, Leclerc, Ricciardo and Albon.

Bottas failed to concede and stayed alongside the #44. The move gave him the inside line at turn 3 and the race lead. Hamilton appeared to slow momentarily as a small gap grew between the pair. Verstappen, Leclerc and Ricciardo settled into position behind the leaders, while Norris, Perez and Albon jostled for 6th place. At the end of lap 1 it was Bottas from Hamilton, Verstappen, Leclerc, Ricciardo, Albon, Norris, Perez, Ocon and Sainz. Giovinazzi had enjoyed an excellent opening lap to climb into 11th place, just behind Sainz, who was unhappy with the most recent updates to his McLaren.

The field soon began to spread out with Bottas ahead of Hamilton by 1.7 seconds by lap 5. Verstappen sat a further 1.4 second behind the top 3 were all lapping in the 1:3 bracket. Leclerc, was struggling with lap times of 1:34 sec and had dropped back 7 seconds from the Aston Martin Red Bull with Ricciardo tucked right behind the rear wing of the Ferrari in 4th.

Albon was the first to stop on lap 8 and switched to the medium compound tyres. He returned to the track in 20th place behind Grosjean’s Haas. Ricciardo finally found a way around the Ferrari at turn 2 on lap 9. Leclerc tried to respond on the inside of turn 3 only to see the yellow and black Renault sweep around and cover the position for 4th place. In an instant Ricciardo was just under a second ahead of Leclerc and pulled away to try and bridge the 16 second gap to Verstappen in 3rd.

Sebastian Vettel stopped for the hard compound tyres on lap 12 after a failed attempt to pass Giovinazzi at turn 1 saw the Ferrari lock the rear wheels and spin off at the approach to turn 1. Leclerc also stopped at this time and resumed just ahead of Vettel in 17th. George Russell made his first stop and found himself just ahead of Raikkonen in 19th. The British driver was fortunate to stay the right way up after contact with Raikkonen at turn 1 a few laps later that saw the Williams launch over the front wheel of the Alfa Romeo and all but roll over as it landed on the rims of the left wheels.

“Ahh, my word,” Russell told his engineer. “I gave him plenty of space. Plenty, plenty of space.” The Williams driver tried to get the car back to the pit lane only to stop later in the lap and eventually brought a Virtual Safety Car on lap 16.

Hamilton made up almost a half a second on Bottas after the leader suffered a heavy lock up on the left front at turn 1 and drove around the #77 for the race lead on lap 13. Bottas made light contact with Hamilton as he tried to protect the lead but all to no avail. Verstappen had also lowered the gap to the two Mercedes and sat within striking distance of the race lead. Bottas stopped at the end of the lap for the medium tyre. He found himself behind Ricciardo but made short work of the situation and overtook the Renault on lap 16.

The Virtual Safety Car gifted Hamilton, Verstappen and Ricciardo a golden opportunity to grab the advantage from those who had already stopped and they quickly pitted for medium tyres. As the race resumed Kvyat ran wide and made contact with the rear of Albon as the Aston martin Red Bull drove by. The contact ripped the front wing from the Alpha Tauri and left pieces of carbon fibre scattered across the circuit.

“They race me so hard,” complained Albon of the Alpha Tauri team as he fought with driver Pierre Gasly for 8th place and after the contact with Kvyat. The damage from that incident eventually caused his retirement from the race.

There were problems for Bottas as well with his Mercedes suddenly dropping places on the track. “I have no power, no power,” The Finn radioed to his engineer. “It looks like limp mode or something, I have no power. Is there any driver defaults?” His engineer replied “Default zero-one.” Bottas was told to stop and retired from the race on lap 20.

“Unlucky, what can I say,” Bottas said later to Sky Sports. “During the VSC I started to lose power and it never recovered. It was quite a big loss of power, so it was obviously something to do with the power unit.”

Hamilton led the race on lap 20 from Verstappen. Norris and Perez sat in 3rd and 4th, though neither had made a pit stop, with Ocon, Sainz, Ricciardo, Gasly, Albon and Hullkenberg completing the top 10.

Ocon was another to experience a mechanical problem as he slowed suddenly towards the end of lap 23, which saw teammate Ricciardo take to the escape road to avoid contact.

“I lost something, I don’t have braking and the gears are not working guys,” Ocon told his engineer as he headed down the pit entry lane and into retirement.

The race was fast becoming one of attrition when Lando Norris slowed from third place with power unit issues. “It’s getting worse, a big loss of power now. I’ve got no power at all.” Norris complained to his engineer. “Okay keep going, we’re checking, default zero-three,” came the response.  “It’s still bad,” Norris replied as he continued to circulate.

By half distance in the race, Hamilton had etched out a 5 second led over Verstappen, with Ricciardo a further 49 seconds behind. Leclerc, Perez, Sainz, Norris, Giovinazzi and Vettel were the top 10 at that point.

Lando Norris’ power unit problems finally reached a braking point on lap 44 when the orange McLaren finally rolled to a stop at the outside of turn 6. The stranded car was initially covered by a yellow flag through the sector before the decision was made to release the Safety Car. Ricciardo stopped immediately for a fresh set of soft tyres as a small fire slowly burned away at the right sidepod of the stranded McLaren. Hamilton and Verstappen covered Ricciardo’s stop on the following lap. When Perez also stopped, Ricciardo moved into 3rd place.

Hamilton used the DAS to warm his front tyres then surged ahead at the restart as Ricciardo looked to pass Verstappen into turn 1. Perez then tried a move on the Renault at turn 2, which gave the Aston Martin Red Bull some much welcome breathing space.

The leaders remained unchallenged during the final 5 laps of the race, with Hamilton 3 seconds ahead of Verstappen, who was 8 seconds clear of Ricciardo. Perez had dropped to 1.3 seconds behind the Renault. Sainz, Gasly, Leclerc, Hulkenberg, Grosjean and Giovinazzi were the top 10 at that point and remained that way to the chequered flag.

Hamilton’s win equalled the all-time record held by Michael Schumacher, ironically at a circuit where the former Ferrari driver had more race victories than any other driver.

“I had a good start and got up alongside Valtteri and we both understeered into the corner and he was in my blindspot so I didn’t know where he was after that.” Hamilton explained to Sky Sports. “So I move as wide as I could to the outside. He came back and did an amazing job. I remember coming out of that corner thinking good on you man. I’m impressed, that was good. I was looking after my tyres really well, where I could see that he was graining his, so I knew that the next couple of laps was the time for me to push. The he had the lock-up. It was not an easy race at all, the Red Bulls are so fast and Max drove extremely well as well. I’m telling you, I’m knackered.” 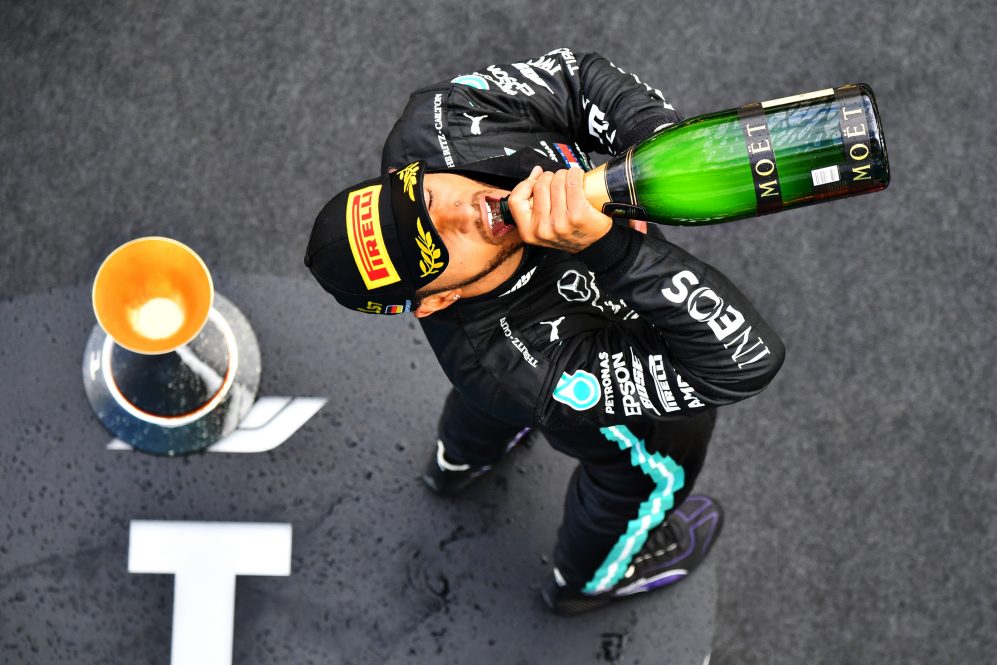 “I’m really honoured man,” Hamilton said to Schumacher. “Thank you so much, it is such an honour.”I really don’t know what to say,” Hamilton added when talking to Sky Sports. “You know when you grow up you watch someone and generally idolise them, in terms of the quality of driver they are , for they are able to continuously do what they do year after year, race after race, week after week with their team. I remember playing Michael on the game Grand Prix 2, just seeing his dominance for so long. I don’t think anyone, especially me, would see me anywhere near Michael in terms of records. So, it’s an incredible honour.”

Daniel Ricciardo’s 3rd place marked the first podium for the Australian since 2018.

“Yes It’s been a while,” Ricciardo joked with Sky Sports. “To be honest it feels like the firs podium all over again. I think it’s been two and a half years or something and the feeling is really nice, it’s fresh. Wow, so happy and obviously for the team and everyone else as well. We’ve all waited a long time for this, so I think everyone’s going to soak it up. It’s real, Ricciardo smiled when asked about the tattoo bet with Cyril Abiteboul, “It’s going to happen. We’ll have to do some thinking now. Probably something to do with me, but something to do with a German flavour. This is obviously the place we did it so a little tip of the hat to something traditional to Germany as well.”