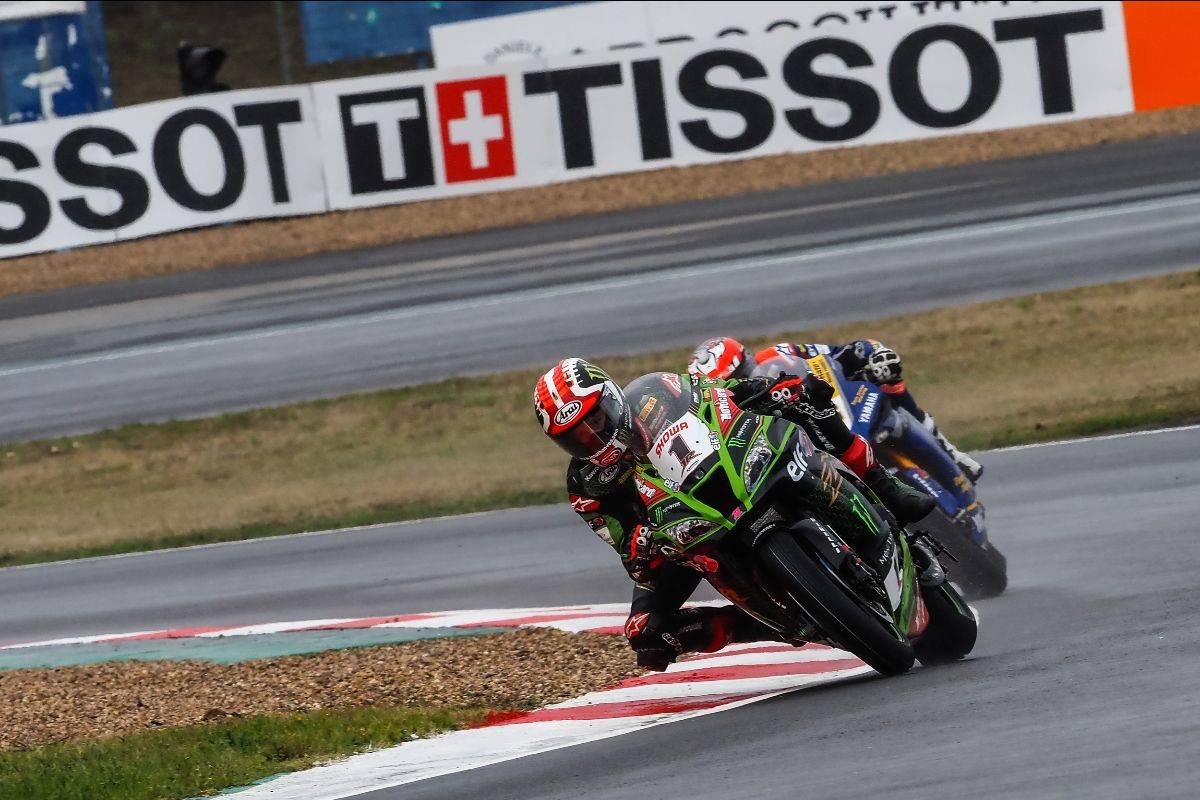 A WorldSBK Thrilling wet race at Magny-Cours won by Jonathan Rea after the two BMW riders crash out from first and second on Lap 1.

Thrilling action up and down the grid was the order of the day during Race 1 for the MOTUL FIM Superbike World Championship with wet conditions greeting the 21 riders for the opening race of the Pirelli French Round at the Circuit de Nevers Magny-Cours as Jonathan Rea (Kawasaki Racing Team WorldSBK) claimed his 10thvictory of the 2020 season.

The drama started at Turn 1 as both Tom Sykes (BMW Motorrad WorldSBK Team) and teammate Eugene Laverty retired from the race on the opening lap; Laverty was taken out by a falling Sykes after the British rider was hit by Garrett Gerloff (GRT Yamaha WorldSBK Junior Team).

The incident left Rea, Loris Baz (Ten Kate Racing Yamaha) and Gerloff battling for victory after Gerloff fell back following a mistake at Turn 5. Gerloff recovered to third place but a crash at the Turn 6-7 Nürburgring chicane forced him to retire; the American star taken to the medical centre for a check-up. It meant Rea and Baz duelled it out for victory with Rea coming out on top by around three seconds while Baz secured his first podium at Magny-Cours. Alex Lowes (Kawasaki Racing Team WorldSBK) finished in third place as he secured his first podium since the Australian Round; Lowes securing his third podium of the season.

Chaz Davies (ARUBA.IT Racing – Ducati) followed up his victory at Catalunya with fourth at Magny-Cours as he continued to his strong end to the season as the Welshman finished ahead of the battling trio of Toprak Razgatlioglu (PATA YAMAHA WorldSBK Official Team), Leon Haslam (Team HRC) and Scott Redding (ARUBA.IT Racing – Ducati). Redding finished in fifth place ahead of Razgatlioglu in sixth after Haslam passed Razgatlioglu into Turn 12 before crashing straight after; Haslam retiring from the race.

Samuele Cavalieri (Barni Racing Team) finished the race in 16th; equalling his best result of his races in the 2020 season with Takumi Takahashi (MIE Racing HONDA Team) rounded out the classification in 17th place, with Haslam, Gerloff, Sykes and Laverty all retiring from the race.

P1 Jonathan Rea (Kawasaki Racing Team WorldSBK):
“I felt pretty good out there straight from the get-go, but to be fair Loris and Garrett and Alex were in the group and the pace was incredible. Doing 48, 48, 49, 48. Every time I saw my dashboard, I thought I’d be able to get a gap but they were right there. It was a really fun race, Loris pushed me right to the end. He made a small mistake, I think, with five or six laps to go.”

P2 Loris Baz (Ten Kate Racing Yamaha):
“I’m so happy. It was a crazy race. I know I had fantastic pace all weekend, but I took a gamble in Superpole, I went for the intermediate tyre. I just missed out on the right lap by a few seconds, so I was a bit annoyed at that. I had a great race, great pace and tried to be as close as possible. The pace he was putting was crazy, every lap he improved the time and for 12 or 13 laps we were going faster and faster. I had a moment on the kerb going into the last chicane, I lost a second, and then I just tried to manage the gap with Alex and then staying close to Jonny in case he made a mistake. He doesn’t make many mistakes so hats off to him because it’s not easy to put this kind of pace when you’re playing for a Championship. We have some fans here and it’s my first podium at Magny-Cours so I’m happy for them and we try again tomorrow.”

P3 Alex Lowes (Kawasaki Racing Team WorldSBK):
“I felt good in the wet all weekend. The start was a bit hectic, Gerloff got a bit too aggressive on the inside and I was lucky to miss that altercation. After that, I felt quite good. I got onto the back of the group and then from about half the race I struggled with the front. It’s been a long time since I was on the podium, so I had to manage the second part of the race. I’m happy to be back up here!”