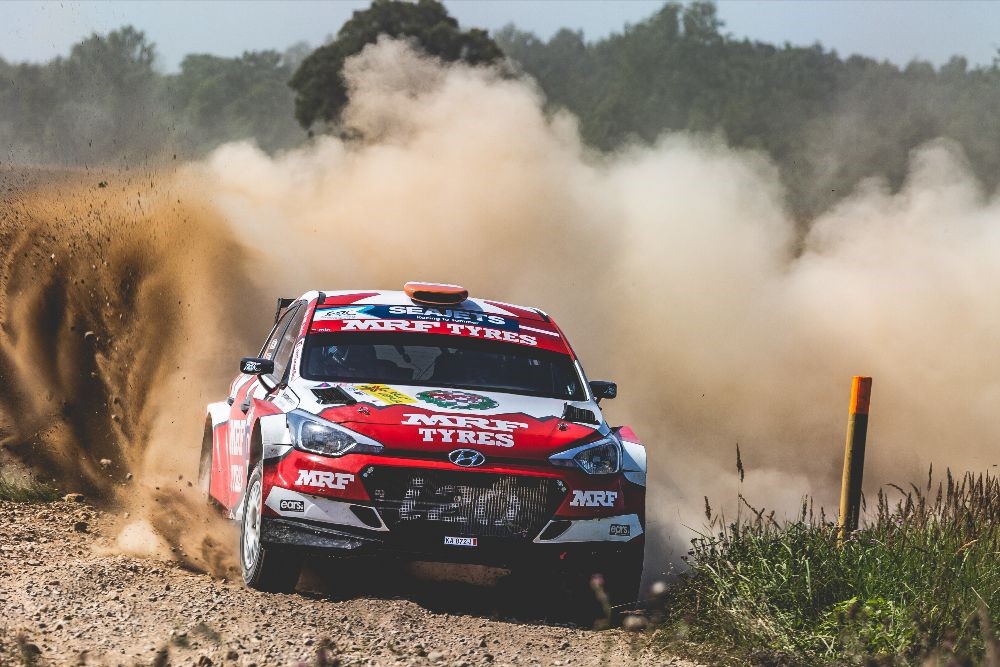 Team MRF Tyres returns to tarmac for the third round of the 2020 European Rally Championship with the Rally Fafe Montelongo held this weekend in Northern Portugal.

The region is known for its rallying, but the usual gravel roads have been traded in for tarmac and will be a new rally for all the front runners. It is the first time since 2003 that the FIA ERC will rally on the Portuguese mainland.

It is also a big change for Team MRF Tyres who were preparing for the Azores Rallye before Covid forced changes to the next two rounds. The result is that the rallies for the rest of the year will be run on tarmac.

It does present the ideal chance for MRF Tyres to further develop the next generation of tarmac tyres. The first round of the FIA ERC –  the Rally di Roma Capitale, was the first time the Indian brand competed in top class rallying on tarmac.

For Rally Fafe Montelongo, Craig Breen and Paul Nagle will return with their Hyundai i20 R5. They currently sit in third in the Driver’s Championship with 40 points.

The duo returns after their WRC success with a podium in Estonia since the last round and are eager to get back on stage on MRF Tyres.

For the Skoda Fabia Rally2 evo duo of Emil Lindholm and Mikael Korhonen, they are third in ERC1 with 48 points.

They had a heartbreaking retirement in final round in the Finnish Championship, the Pohjanmaa SM-Ralli but finished second overall in the Championship. For them, the trip to Portugal was always going to represent a new rally.

The Rally Fafe Montelongo features 18 stages over two days – the most number of stages in any rally this season. Both Saturday and Sunday will have three loops of three stages each.

The first stage is the 6.92km of Montim. It is followed by the longest stage of the rally, the 14.13km Anjos test before the 10.88km of Queimadela / Travassós which finishes the loop. With these stages run three times, the total distance for the day is 95.79km

Sunday the stages gets underway with 6.10km test of Várzea Cova before the 11.72km Monte stage and the 10.73km Guilhofrei stage. Sunday’s stages total 85.65km for three loops and making it a total of 181.44km of competitive rally action over two days.

Adding to the mix is the uncertain weather. The conditions so far this year have been sunny and warm but the weather forecasters are predicting rain and maximum temperatures of 15 degrees throughout the coming weekend.

The Covid regulations mean there is no spectator access, but the FIA ERC will be live streaming SS2, SS6, SS11 and SS18 through the weekend. This is in addition to the live radio provided for all stages.
Team MRF Tyres will also be bringing content through the weekend on our social channels.

The action will kick off with Shakedown on Friday at 4pm local time before the first stage proper gets
underway at 9am local time on Saturday.

“Thankfully, the organisers worked hard to make the event happen, in what are obviously difficult times. So at least we will get to go and visit Portugal. It looks like it will be a nice rally from what I what I see on the online videos as the roads look to have a nice profile.”

“We had a development test in Italy to get back into the tarmac mode. The rest of the events are now on tarmac, so it is very important. I am looking forward to the progress and getting even better results.”

Emil Lindholm (Driver, Team MRF Tyres, Skoda Fabia Rally2 evo)
“The Rally Fafe Montelongo rally will be a great challenge for us and Team MRF Tyres. I have only been to Portugal and around Fafe in a recce for the WRC round but that is on gravel and this is on tarmac! We need to all learn more about these roads and how we will attack them. From the videos, the surface looks nice and different to what we saw in Italy. It will be another new challenge.

“I was looking forward to the Azores as my father had rallied there many times. But I am looking forward to Fafe and am thankful that the organisers were able to make it happen. It is a new rally for me, so the approach will be to go and learn.”

“Our focus continues to be on the development of the next generation of MRF Tyres. But I would like to be ahead of where we were in Rome where we took a top 10 for Team MRF Tyres. We know the quality of the field in the ERC is super high, so any result is earnt!”