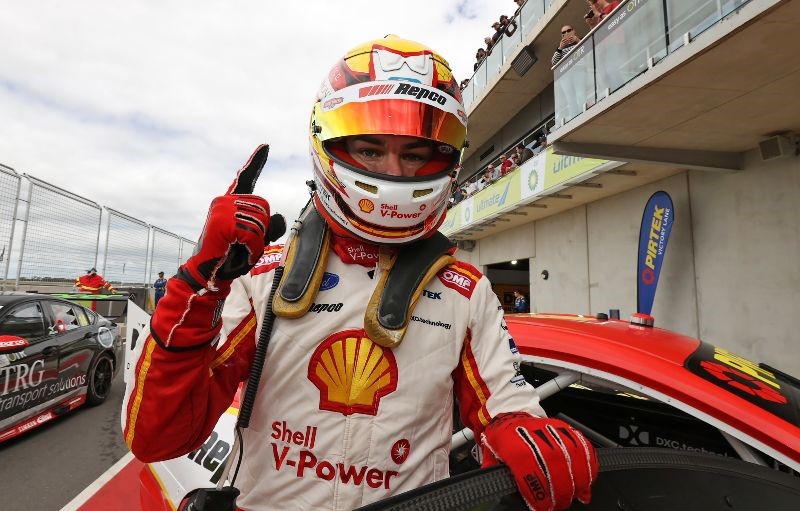 It’s hard to explain my emotions right now as I sit down at the laptop after a fortnight in Tailem Bend.

There’s pride. And there’s satisfaction. Elation – plenty of that. A sore head after a few too many drinks Sunday night. And there’s relief.

What a ride it’s been – I still can’t quite get a handle on it…three championships! Seriously!

People ask me often what it means.

I’m enormously proud of what we’ve been able to achieve – but I reckon later in life once I’m retired, the race wins, the poles, the titles will mean just that little bit more.

But for now, it’s just so pleasing to have the title beyond 300 points so we can attack Bathurst with everything we have as a team.

I’d have never said it before last week – but I’m so glad we don’t have to play the points game at Mount Panorama, and we can just unleash on winning the biggest race of the year with no concern for the crown.

Just on Bathurst – what a weekend it will be.

It could be one of the greatest we’ve ever had with so many A-grade pairings gunning for the win, with no consequence over championship points.

I’m so looking forward to returning as the defending champion, and teaming for the first time with my good friend, Tim Slade – I know how excited he is about the opportunity.

It will be so different heading into town knowing we will have such a reduced crowd – but I hope the television numbers are enormous. It’ll be a crazy weekend for sports fans with the AFL & NRL Preliminary Finals on, plus a huge Saturday racing day with the Caulfield Cup & Everest.

I think the chaos of 2020 actually makes this title super memorable for all the hurdles we’ve had to jump along the way. And that’s everyone in the sport.

We as a sport are so thankful to the Victorian teams who have sacrificed so much to be away from home and away from family for such a long period to ensure this year’s season happens.

But for all teams and drivers and staff and officials to live through what we endured at Albert Park, then the COVID shutdown, the Eseries which was such a success, and then life on the road with so many back-to-back events and so much uncertainty about race weekends even happening – it’s been truly amazing to actually have a championship take place.

It’s been such a difficult year, but I’ll remember it fondly for so many reasons.

To now have my name up there with the Skaifes and the Lowndes and Brocks is just awesome. I’ve said it to you guys before – but I’m a lucky boy and I’m living my dream.

I’m so thankful for the opportunity I have to race for a great team and for two icons of motorsport in Roger Penske and Dick Johnson.

I’m lucky to have great parents and a great sister by my side, and what a ride Karly, my wife and I have been on.

Times like these, the sacrifice you put in makes it all worth it.

And now I’ve got one up on my mate, Jack Riewoldt. We’re recording an episode of our podcast “Balls and Bumpers” this afternoon. He starts his bid for back-to-back AFL premierships this weekend, and a third title inside four years. It’s truly amazing how parallel our success has been these past few years as our friendship has grown.

I’m a Bulldogs man and I’m hoping they can have a great finals campaign, but there’s also a piece of me that will be cheering for the Tigers.

Hope you all enjoy the footy finals ahead.

Thanks again for the support. Talk to you before our grand final in a few weeks, bring on Bathurst!