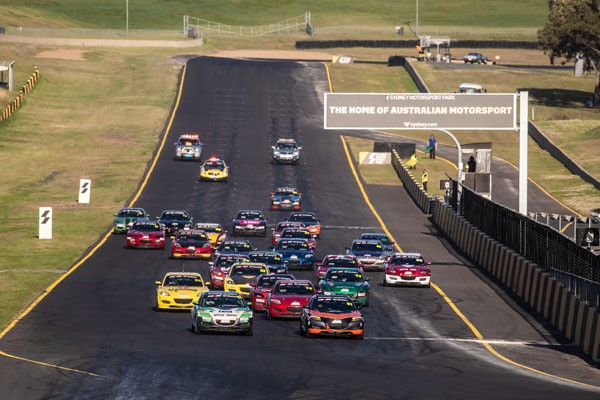 After a lengthy break induced by the COVID-19 pandemic, the Australian Motor Racing Series will resume at Sydney Motorsport Park this weekend.

While state border closures have prevented some of the core AMRS national categories from attending the race meeting, the event programme has been supplemented by a range of NSW-based classes.

The NSW Production Touring Cars Championship has attracted a typically diverse array of machinery, ranging from the four-cylinder Suzuki Swift of Bruce Colbey/Cody McKay all the way up to Joe Krinelos’ supercharged F-Series HSV GTS.

The overall points leader, Daniel D’Aquino, will be looking to wrap up the title in his VE Commodore SS with a consistent performance in Class B2.

In the HQ Holdens, the endurance format has attracted some veteran racers back to the category including Richard Mork, who will drive alongside Rob McDougall in the enduro and Peter Dane, who teams up with Wayne Healey. Other front-runners are likely to include young gun Luke Harrison, former series champ John Baxter and Layton Crambrook, who won the Wakefield Park round earlier in the season.

The Production Sports/Super GT field will include an array of GT3 machines such as Andrew Macpherson’s Lamborghini Hurracan, Nick Kelly’s Audi R8 and Vince Muriti’s Mercedes AMG GT3. There is also an assortment of Porsches, the newest of which is Indiran Padayachee’s current-spec 991 Gen 2 Carrera Cup car. Like the other endurance categories, the one-hour race will include a compulsory pit stop with the option of a driver swap.

Justin Barnes enters the RX8 Cup round full of confidence after achieving his maiden round win last time out; Barnes’ main opposition looks set to come from Brad Harris, Shannon McLaine, Steve Briffa and former Improved Production champ Steve Devjak. Making his debut in the category will be Brien Place, racing alongside his daughter Maisie.

Due to the interstate travel restrictions, the TA2 Muscle Car Series will run a non-championship round but has still attracted a quality field of NSW-based competitors, including the father-and-son duo of Ian and Hugh McAlister, Michael Coulter, former V8 Utes racer Andrew Fisher and Graham Cheney, who made an impressive debut in the season opener at Winton.

Running alongside the TA2 machines will be the Stock Cars of Stephen Chilby, Danny Burgess, Robert Marchese and Brett Mitchell.

As always, the Group S category will be home to a beautiful array of classic sports cars, including the 1970s Porsche 911s of Wayne Seabrook, Brian Taylor, Doug Barbour, David Cunneen and Mikki Piirlaid, the De Tomaso Pantera of Carey McMahon and Shelby GT350 of Terry Lawlor. There is also a collection of Alfa Romeos and MG Midgets.

Due to COVID-19 restrictions, spectators will not be permitted to attend the venue this weekend, but regular updates will be published via the AMRS social media channels.