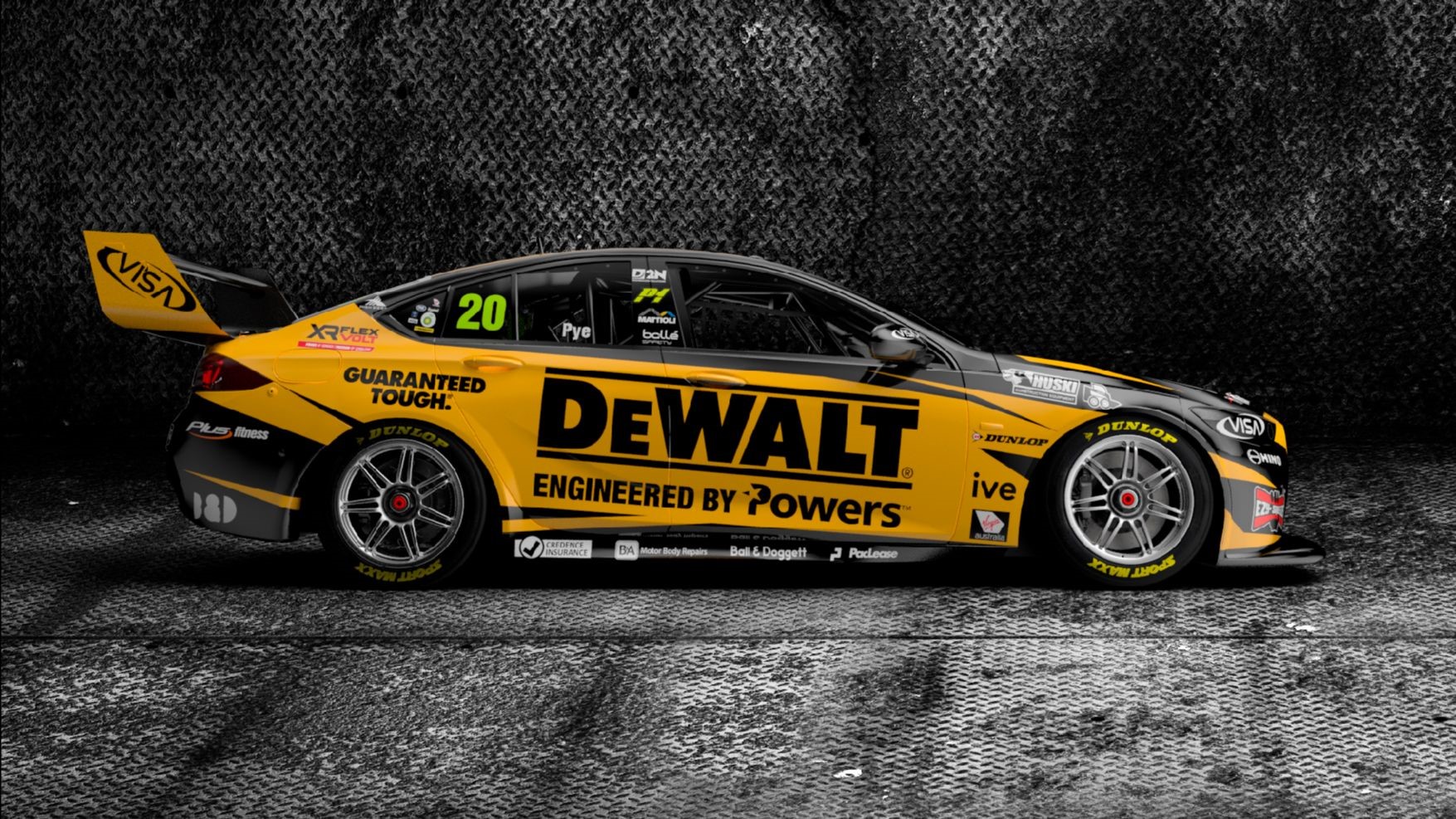 DEWALT®, part of the world’s largest tool company in Stanley Black & Decker, has reinforced its commitment to Supercars squad Team 18 with the addition of the DEWALT® ENGINEERED BY POWERS™ branding on Scott Pye’s DEWALT Racing Commodore for the upcoming double-header at The Bend Motorsport Park commencing next weekend.

The striking yellow-and-black #20 entry retains its colour scheme, with the addition of the DEWALT® ENGINEERED BY POWERS™ signage on the side and roof of Pye’s DEWALT Racing Holden ZB Commodore.

DEWALT® ENGINEERED BY POWERS™ is the uniting of DEWALT, the trusted brand of choice for professional tradies, and POWERS, a leader in the concrete and masonry fastening industry.

Engineers have collaborated to design mechanical and chemical anchoring systems and tools to deliver a complete system focused on performance and productivity, the result a complete cordless installation tool and anchoring system under one brand, DEWALT® ENGINEERED BY POWERS™.

Pye heads to South Australia off the back of scoring the team’s first podium as a standalone outfit in Darwin. He went on to score three top three finishes at Hidden Valley before a run of eight consecutive top ten race finishes through the Darwin and Townsville events.

The first of two back-to-back rounds at The Bend Motorsport Park in South Australia will kick off on September 19-20.

“We are so proud to have an amazing partner in Stanley Black & Decker who has continued to support us through this time, and it is so exciting to see them use the opportunity to showcase the partnership between DEWALT and POWERS,” said Schwerkolt.

“Innovation is at the heart of racing and that is reflected with DEWALT®  ENGINEERED BY POWERS™ in combining their resources to provide the best tools and anchoring systems to build many of the world’s most iconic structures.”

“To get our first podium as a two-car team in Darwin was sensational and it has only galvanised the team further, because there’s a great feel of knowing the potential we have.

“The way Supercars has adapted its product in the wake of the COVID-19 pandemic has been remarkable, and it’s proof when you see how the team partners have reacted. There’s a sense of excitement and it’s building up really nicely to the big grand finale at Mount Panorama.” 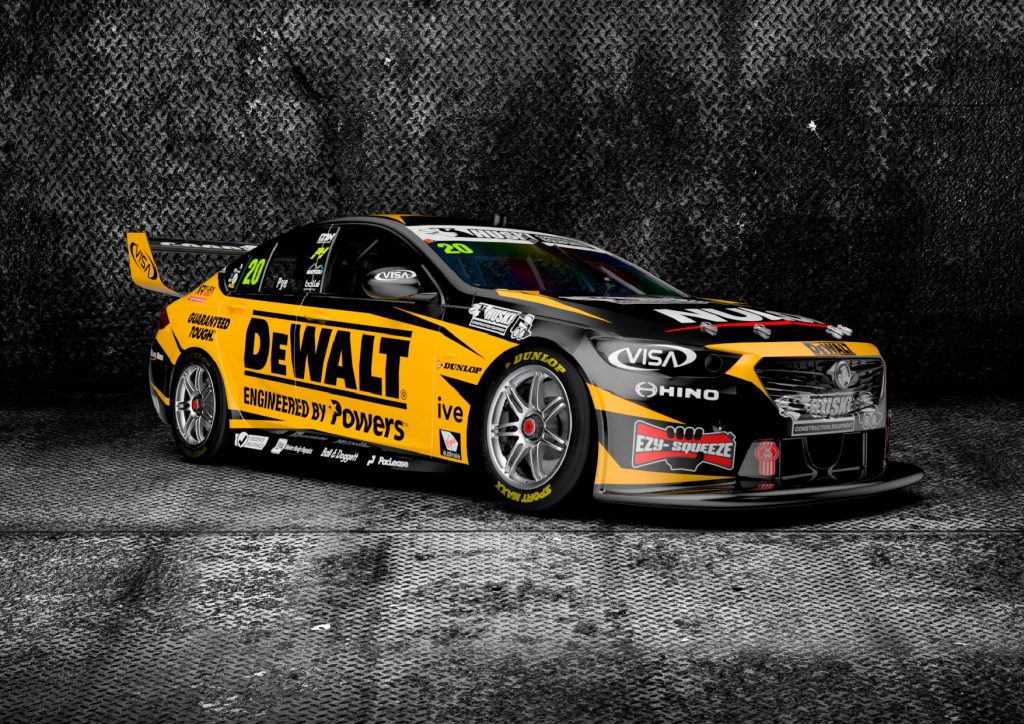 “It’s great to see DEWALT® using my #20 car in a way to showcase its class-leading position as part of the world’s largest tool company,” said Pye.

“DEWALT® is new to the Supercars Championship in 2020, and given the situation that the world faces this year, it might have been easy for them to change its approach. However, they’ve shown a great deal of loyalty and persistence and having the new branding on the car shows that they are remaining engaged and active.

“All of the team has been really encouraged with the speed of the DEWALT® car. We’ve been making changes that are having a positive effect and we’re showing that on the track.

“The Bend will offer more challenges for us, but the just like the last few rounds, we’re going in with a lot of confidence and we will be sure to put our best foot forward when we hit the track in South Australia.

“2020 has proved a challenging time for all, and DEWALT® has been very fortunate to be able to continue our association with Team 18 and maintain the DEWALT Racing sponsorship within the Supercars Championship,” he said.

“While there are many competing priorities and challenges during this environment, we stuck by Team 18, and they stuck by us, and the results that we are seeing are paying dividends.

“To see the first DEWALT Racing podium was fantastic, and to get back-to-back podiums was sensational. The way Scott and the team have the car set-up for the race, and the passing that enables Scott to do makes the race coverage very exciting to watch, which leads to some great brand coverage for DEWALT®.

“For The Bend, we are changing the livery of the car to support the launch of our new anchor and fastening construction range, where our legacy Powers brand is now being relaunched as part of the DEWALT® family.

“The DEWALT® ENGINEERED BY POWERS™ livery looks very strong and we are looking forward to the coverage at The Bend, and hopefully we will need to provide some tools for Charlie to extend the trophy cabinet.

“A huge thank you goes out to everyone involved with Team 18, we appreciate the sacrifices they are making and the teamwork is shining through, this is a credit to Charlie for what he has assembled.

“The Bathurst 1000 will also be very exciting to watch this year with the momentum DEWALT Racing has built.”