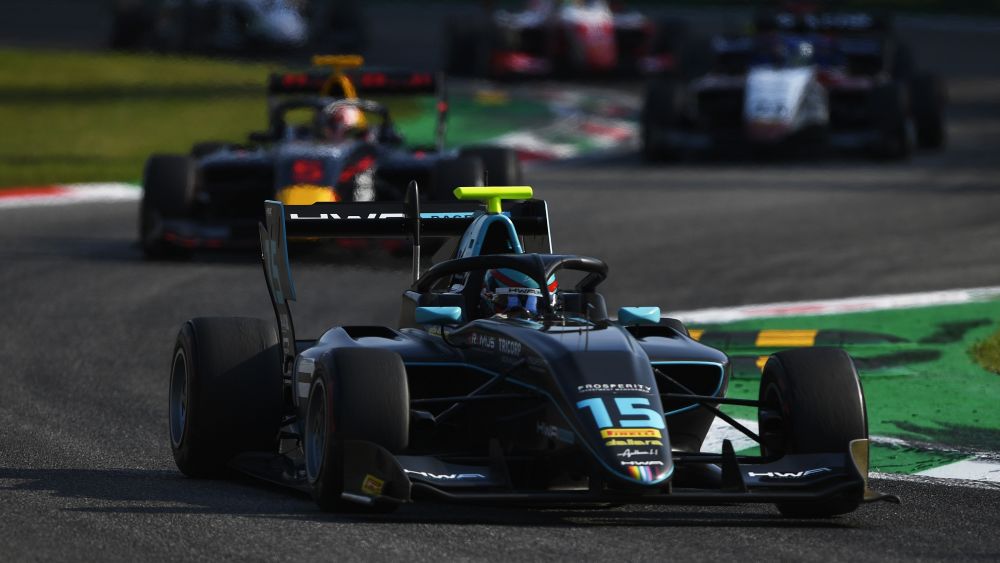 On paper Race 2 looked to be the ideal situation for Oscar Piastri to extend his Formula 3 Championship lead. His nearest rival and former leader, Logan Sergeant, as well down the order in 26th, while Piastri sat 8th on the grid. However the front of the grid was peppered with rookies and experienced, race hardened drivers, with Michael Belov on pole position from fellow rookie Enzo Fittipaldi.

The more experienced Bent Viscaal, Lirim Zendeli, Liam Lawson and Jake Hughes occupied the second and third rows of the grid. The long run to the first corner offered ample opportunities to gain places, while the tight chicane was a trap for the unwary.

Belov held the lead on the main straight and looked to cover Fittipaldi on his left. In doing so he left the inside line into turn 1 unguarded and Zendeli was quick to seize the opportunity. The field managed to clamber through the opening corners without incident with Zendeli ahead of Fittipaldi, Belov, Hughes, Lawson and Piastri. Lucas Dunner ran well off track through the Curva Grande but managed to bounce his MP Motorsport Dallara across the gravel and back onto the circuit.

Zendeli led at the end of lap 1 from Fittipaldi, Hughes, Lawson. Beckmann, Belov, Piastri, Pourchaire, Viscaal and Vesti. Pourchaire looked to force his way past Piastri, but the Australian driver stood firm and the ART machine ran off at the exit of the Variante della Roggia and quickly dropped back to 18th position behind Logan Sargeant. The PREMA driver and former championship leader was on a charge and moved into 14th on lap 5, just behind Alex Peroni. Piastri was also on the move and set the fastest lap of the race once he had displaced Belov from 6th place.

Fittipaldi was given the hurry up call from is team and closed on Zendeli. He swept around the outside of the Trident and into the lead at the Variante della Roggia on lap 5. Zendeli regained the lead on lap 7, which allowed the field to close on the pair as they battled for the lead. David Beckmann’s hopes for a points finish came to an end that same lap when he ran wide and then struggled to get back up to speed, dropping the Trident driver back to 15th.

Fittipaldi took the lead back from Zendeli at the Parabolica and led the start of lap 8. His lead was short-lived as he and Zendeli made contact at the first chicane then a puff of smoke signalled a punctured left rear tyre on the entry to the Curve Grande. Zendeli was momentarily slowed by the HWA RACELAB Dallara and Liam Lawson stole the race lead. Piastri had moved into 3rd position on lap 9 with teammate Vesti right behind after Zendeli ran on at the first tun. The PREMA pair began to lose touch with second placed Hughes as they argued for position and allowed Belov, Novalak, Zendeli, Schumacher, Viscaal, Sargeant and Peroni.

Hughes took the lead from Lawson into turn 1 on lap 10 as disaster struck Oscar Piastri. Novalak and Belov had both moved right for a pass on Piastri into turn 1. Novalak carried far to much speed into the corner and cannoned into the side of Piastri’s PREMA Dallara. He than became airborne as he drove over the front nose of the Australian’s car. Piastri managed to return to the track but dropped down to 21st place with obvious damage to his car. Novalak and Belov were momentarily stranded but returned to the circuit, quickly caught Piastri and moved past as Sergeant climbed up to 5th place. Amazingly Novalak had succeeded in taking out the championship leader in both races across the weekend!

Piastri’s race ended on lap 10 when he pulled to the side of the circuit with damage to the #1 PREMA car. The Virtual Safety Car was introduced as Marshals removed Piastri’s car from the circuit.

“Let’s go! I could win this thing,” shouted Sergeant on his radio as the Virtual Safety Car period came to an end. It was perhaps music to the ears of Piastri supporters, where a more circumspect approach might be prudent.

His exuberance was tempered almost immediately when he lost 5th place to Viscaal, only to return a lap later when he regained the position. Sergeant closed on teammate Vesti, who was in no mood to favour the #3 PREMA. The pair diced furiously with Sargeant complaining on the radio about his teammate’s behaviour. The battle played into the hands of the recovering Zendeli who moved past the pair and allowed Pourchaire to join the exchange on lap 19 of 22.

The #7 ART passed Sergeant for 6th as Smolyer also closed in on the quartet. The Amercican tried once again to overtake Vesti at the entry to the Ascari Chicane only to glance his left rear tyre against the #2 PREMA’s front wing. Sergeant speared off track and bounced over the gravel with a punctured tyre. He limped back to the pits and retired from the race as Vesti fell back through the pack with damage to his front wing. The #2 PREMA then received the mechanical black flag for the damaged front wing.

Hughes maintained a comfortable gap of 2.4 seconds over Lawson during the final laps of the race as both Pourchaire and Smolyer move past Zendeli for 3rd and 4th. Alex Peroni drove a sound race to take another points finish in 6th place ahead of Chovet, Stanek, Caldwell and Verschoor. Calan Williams finished 19th and fellow Aussie Jack Doohan came home in 22nd.

“That’s it boys, that’s it. That was good. Cheers boys, cheers.” Hughes radioed to his team on the cool down lap.

The results, whilst leaving the gap unchanged between Piastri and Sargeant at the top of the Championship standings, has brought both Lawson and Pourchaire back into contention for the title decider at Mugello next weekend.