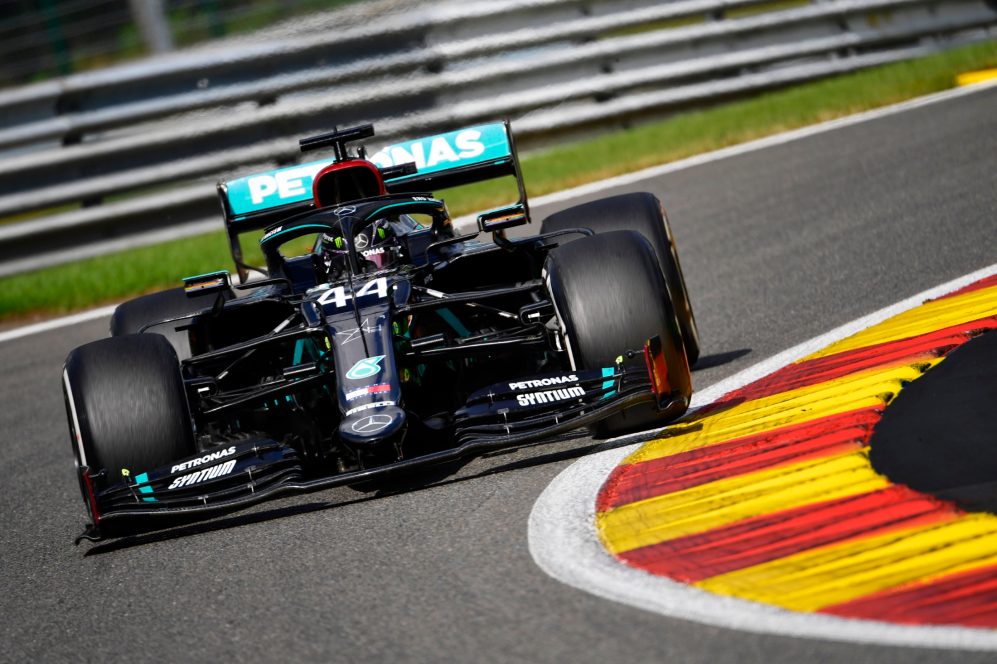 Race day for the 2020 Belgian Grand Prix dawned with a number of uncertainties. Would the Renaults use a perceived straight line speed advantage to grab an early lead on their soft compound tyres? Would Ferrari show an improvement in their race pace and move closer towards the midfield runners? Would the predicted rain play a role in the final outcome?

Another uncertainty befell the McLaren team some 30 minutes before the scheduled start of the race. Carlos Sainz’s race ended before it had started when an exhaust issue on his out lap led to an engine drama. Sainz drove the car back to the garage, climbed out of the car and walked out of the garage as engineers looked at the problem. It was announced shortly after that the car was ruled out of the race.

Lewis Hamilton led Bottas off the line as Verstappen and Daniel Ricciardo fought for the right to challenge the second Mercedes. The pair squabbled for track position through the first turns, up Eua Rouge and along the Kemmel straight. Verstappen squeezed Ricciardo off the track at one point only to find himself off the circuit proper moments later. All this allowed Hamilton and Bottas to move safely ahead. Verstappen eventually settled into second, with the top three all running the medium compound tyres. Ricciardo headed teammate Ocon from Albon, Stroll, Perez, Leclerc and Gasly as the opening lap drew to a close.

Gasly stole 9th from Perez on lap 2 with a daring move up the hill, with the pair side by side through Eau Rouge. Perez looked to pounce back at the end of the Kemmel Straight as Norris looked to pass the Racing Point, though the order remained the same. Hamilton had already opened a 1.663 second lead over Bottas, with Verstappen 1.2 second further back. Leclerc moved up to challenge Perez for 9th only to lose ground under acceleration. “I’m struggling so much on the straights,” he radioed to his engineer on lap 4.

Despite a fast lap from Bottas, Hamilton continued to lead and reset the fastest lap to extend the gap between the top 2. A clearly frustrated Bottas looked for other options. “We have one push, no?” asked Bottas to his engineer. “We do but we agreed not to use against each other,” came the reply from the team. “I never heard of that,” Bottas answered.

Max Verstappen was another to feel the strain under Hamilton’s charge at the front. By lap 10 he was on the radio complaining to the team. “Feels like I have no grip on these tyres,” Verstappen said.

The complexion of the race changed on lap 11 when an incident between Giovinazzi and Russell left both cars with significant damage on the side of the track near Fagnes and a large amount of debris scattered across the circuit. Those down the order were the first to stop for fresh rubber, while the leaders coasted around the circuit and tried to thread the needle between several large chunks of shredded carbon fibre.

The leaders stopped for the hard compound tyres with Hamilton safely away from his pit bay. Bottas had double stacked behind his teammate and only just cleared the departing Max Verstappen at the end of his stop. Ricciardo and Ocon followed with Renault also double stacking their drivers with Ocon losing a place to Albon in the process. Hamilton retained the race lead from Bottas and Verstappen. Gasly and Perez, who had not stopped, leapfrogged past Ricciardo and into 4th and 5th respectively.

Replays showed the Giovinazzi had lost control of his Alfa Romeo on the edge of the kerbs and spun into the outside wall before spinning back across the track. George Russell swerved to the left to avoid the spinning Alfa only to make heavy contact with an errant Alfa wheel. The impact ripped off the right front suspension of the Williams and sent Russell into the barriers. “Ah, I’m alright,” a clearly shocked Russell radioed to his team after a brief moment.

“There’s a lot of debris out there,” Hamilton told his team as the field remained bunched up behind the Safety Car as officials worked tirelessly to clear the track. The race eventually resumed on lap 15 with Hamilton back ahead by over a second moments after the resumption. Ricciardo looked to pass Perez only to have to defend from Albon, who had taken the faster medium compound tyre during his stop. Ricciardo moved up to 5th on lap 17 with a move on Perez at Radillion. He regained 4th on lap 21 with a simple pass on Gasly down the Kemmel Straight.

Hamilton led untroubled throughout the middle stages of the race with a 4 second lead over Bottas and a similar 4 second gap to Verstappen. Ricciardo’s hopes for a podium fell by the wayside when he was trapped behind Perez and Gasly after the Safety Car period as the Renault sat 16.5 seconds behind the 3rd placed Aston Martin Red Bull car. Ferrari’s woes continued with Leclerc’s car requiring a top of up pneumatic pressure during a second stop and Vettel struggled on well worn hard compound tyres. The pair sat in 13th and 16th respectively with 9 laps still to run. Bottas radioed to the team that he was experiencing “Numbness on my left leg from the brakes.”

There were problems for Hamilton on lap 41 as he radioed to the team “I don’t like the fell of this right tyre.” Ricciardo was the big mover over the last 3 laps and made substantial inroads into the gap to the leaders. He went on to take the fastest lap of the race on the final circuit to finish 4th, just 3.422 second behind Verstappen.

“It wasn’t the easiest of races,” Hamilton told Martin Brundle in the winner’s interview. “I had a lock up into turn 5 and it started to give a bit of a vibration and then I had another into the last corner. The tyre temperatures were slowly dropping no matter how much you were pushing. as you lose rubber you begin to lose tyre temp. It was a bit of a struggle but non the less I was a little bit nervous that we might have a scenario like Silverstone with the right front in the end, so I was nursing it. It looks like the tyre has got plenty of rubber on it so maybe it was fine and all worry for nothing.”

Hamilton’s 89th Grand Prix win takes the Brit to just 2 away from Michael Schumacher’s all time GP record and matched Jim Clark with 4 wins at Spa.

“I know it’s not necessarily what everyone always wants. No matter how much success we have we just keep our heads down. When I go back in the office now there’s no guy celebrating, they’re like ‘How can we win the next race’, so it’s an incredible mentality and environment to work around. We are continuing to learn about ourselves, the car, how we can improve week in an out and honestly I think it’s crazy I’m 35 turning 36 but I feel better than ever and I am grateful to everyone for their continued support.”