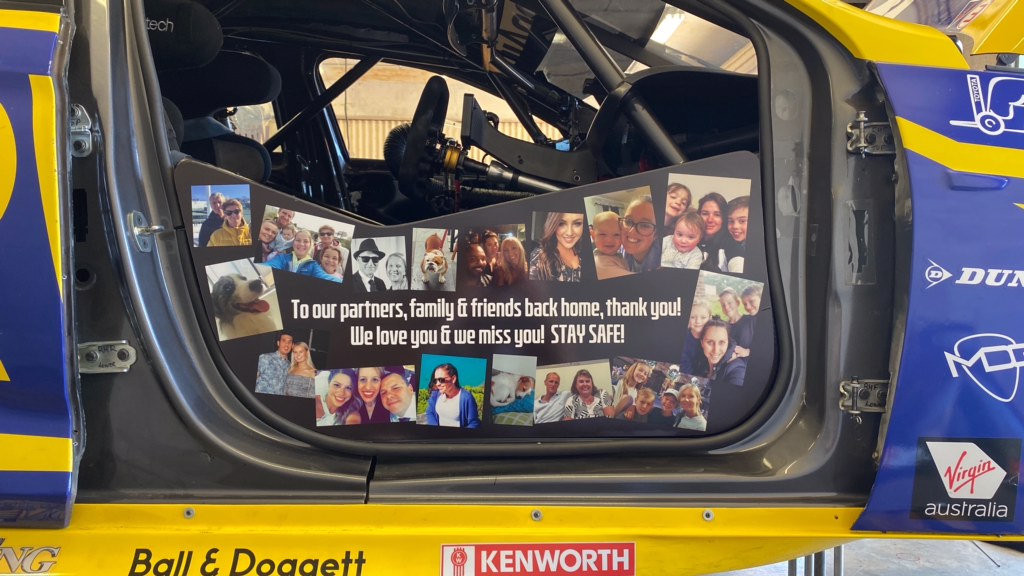 Mark Winterbottom and Scott Pye will sport a special decal on the side pillars of the IRWIN Racing and DEWALT Racing Commodores this weekend with drivers and crew from Victorian Supercars squad Team 18 paying tribute to their partners, families and four-legged loved ones at the CoreStaff Darwin Supersprint.

A montage of photos selected by each member of the travelling crew will appear on the drivers’ side pillar of both cars set to run this weekend in what is now the sixth successive week away from their Melbourne base.

The team heads into the second consecutive event at Hidden Valley with a wave of confidence after new-for-2020 recruit Scott Pye scored Team 18’s first podium finish since stepping out as a standalone outfit in 2016, with third place in Race 13 at the Darwin Triple Crown as Winterbottom followed in fourth.

After a challenging start to the race when Pye had to double-stack behind his team mate, the team swapped tyres on the DEWALT Commodore from hards to softs which enabled Pye to charged back through from 21st to third.

Winterbottom meanwhile enjoyed a consistent weekend in the IRWIN Racing Commodore, picking up results of fourth, 11th and seventh on his way to finishing sixth overall for the Triple Crown.

This weekend’s Darwin Super Sprint will follow the same schedule and race format used last weekend, however the tyre strategy has been altered with the removal of the hard tyre allocation.

Teams will instead have access to five sets of soft tyres for qualifying and the three-38 lap races, so tyre management will still play a critical factor in how the results will play out.

Winterbottom’s results at the Triple Crown saw him jump two spots to seventh in the championship standings, as Pye moved up to 17th off the back of his podium in Race 13.

Track action begins on Saturday with Practice 1 at 9:20am local time, before Race 16 of the championship at 2:00pm. Races 17 and 18 on Sunday will start at 12:25pm and 2:25pm respectively. This weekend’s action can be viewed both days live on Fox Sports 506 and Kayo Sports, with highlights shown on 10 Bold.

Scott Pye, driver #20 DEWALT Racing Holden ZB Commodore
“We’ve got a message on the inside-panel which is to our friends and family around the country who we miss so much,” said Scott Pye.

“For me I’ve got my dog Basil, my sister, my niece and nephew, I’ve been thinking about all of my family while we have been on the road.

“For all of our crew it’s a difficult time at the moment, none of us want to be away from our family but we are doing what we can to keep this sport alive and I hope we can put on a great show this weekend for everyone watching at home.
“We are back to a soft-tyre allocation for this weekend so the racing will be close.”

“It will be difficult to really get a leg-up on anyone from a clear tyre advantage, so the engineers are going to have their work cut-out for them to find our optimum strategy and look at ways which we can out-smart the other teams.

“It’s cool to go back-to-back, as a driver there are things you learn especially in qualifying which you wish you could so straight back out and have a crack at, so it’s good to have the chance to do that. 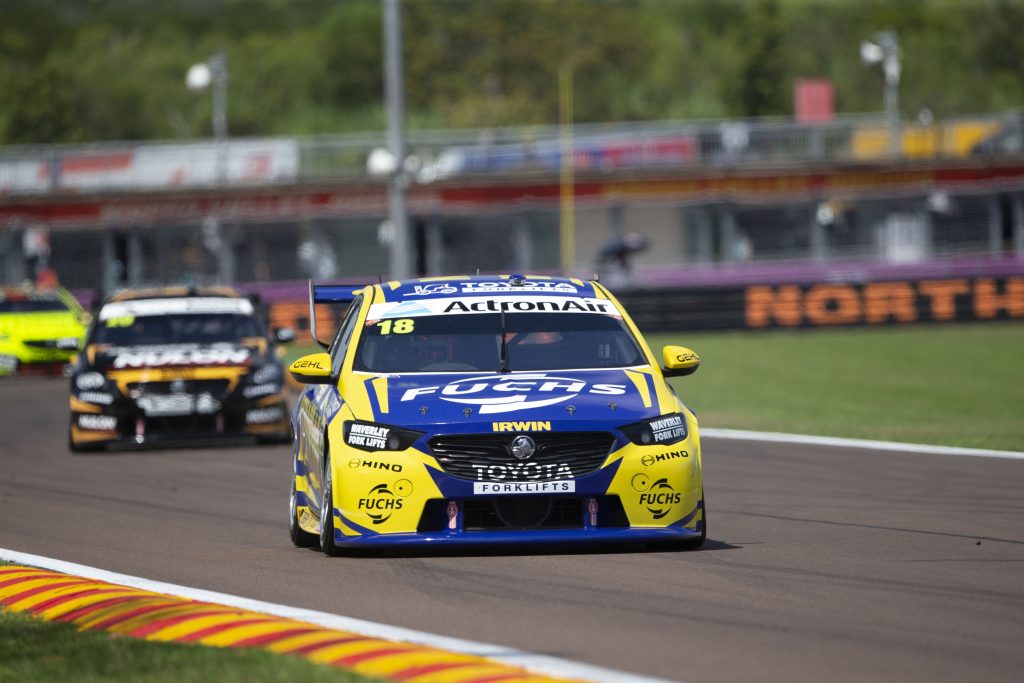 Mark Winterbottom, driver #18 IRWIN Racing Holden ZB Commodore
“We’ve got our families riding with us this weekend which is a nice touch for the team to have on the side pillars of the car,” said Mark Winterbottom.

“It’s pretty special to do that for them watching from home, and hopefully they can bring some extra fight and good luck to the team this weekend.

“Normally it’s 12 months between events at the same track, but this time it’s only five days which is great from a performance point of view.

“I thought our team performance at the Triple Crown was good, our results were strong and we hauled a good bank of points towards our championship.

“Going back there we always want to do better, and if we can do that then we will be in contention for podiums, we have been so close to it the last few rounds in the IRWIN car.

“The soft-tyre format will be interesting in how that will play out, but we will pretty well roll out for that first lap on soft tyres knowing what to expect from the track.”