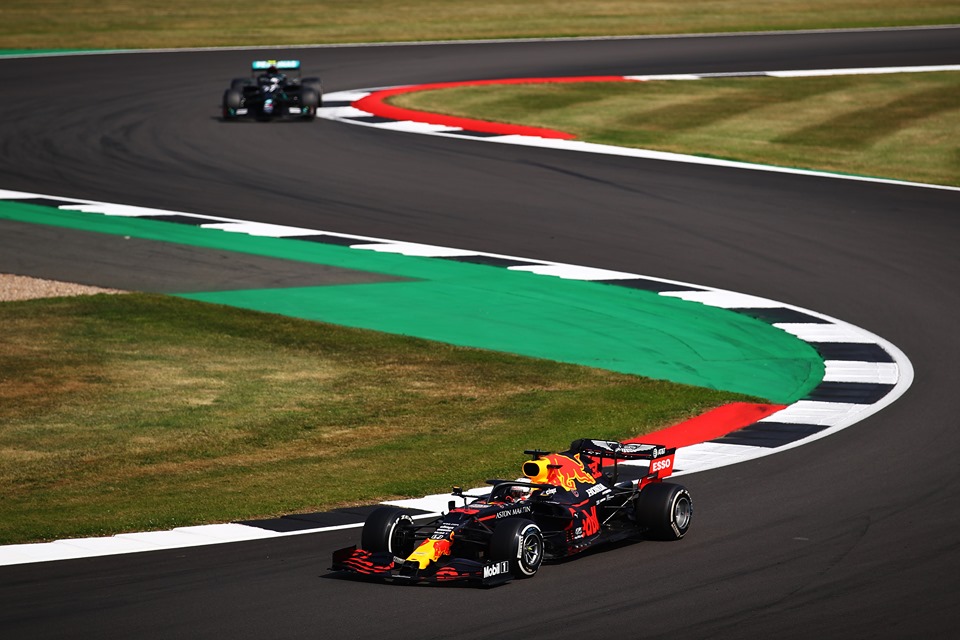 After the tyre woes of the previous week, teams were better prepared and perhaps more circumspect in their approach to the race. Red Bull produced a masterstroke by starting Verstappen on the hard tyre while those around ran the yellow medium compound. Daniel Ricciardo claimed a ‘Seb’ moment cost him dearly in the race while Vettel’s race was also compromised by a namesake error on the opening lap of the race.

Valtteri Bottas led Lewis Hamilton, Verstappen, Nico Hulkenberg and Ricciardo towards Abbey corner on the opening lap of the race. Sebastian Vettel caught the ripple strip on the inside of the corner after Leclerc had locked a brake directly ahead of the German. Vettel spun down to last place and narrowly avoided Carlos Sainz as he fought in vain to prevent a spin.

Daniel Ricciardo was slow through the Loop after being momentarily baulked by Hulkenberg and lost a place to Lance Stroll on the entry to Brooklands. Bottas and Hamilton quickly opened a small gap over Verstappen, with the Racing Point pair an equal distance behind.

Pierre Gasly sat 7th after the opening laps, immediately behind Ricciardo, while Norris, Albon and Leclerc completed the top 10. Carlos Sainz had looked to pass the Ferrari only to pull out of the challenge to the relief of his future teammate. By lap 11, Verstappen had moved to within 2.5 seconds of the race lead and marginally over 1 second behind Hamilton, with the right front tyre on both the #77 and #44 Mercedes showing signs of blistering. When told by his team that the tyre temperatures warranted a slight reduction in speed, Verstappen was direct in his response.

“This is the only chance I have to be close to the Mercedes and I’m not going to sit and drive like a Grandma!” Verstappen exclaimed.

Bottas was the first of the leaders to stop on lap 14 of 52, switched to the harder tyre and resumed behind Ricciardo in 6th. Hamilton followed a lap later and also took on hard tyres. Verstappen inherited the race lead from Hulkenberg, Stroll, Bottas, Leclerc and Hamilton.

By Lap 20 Verstappen, who had not yet stopped, held a 13.4 second lead over Bottas, with Hamilton a further 3 seconds in arrears after moving past Leclerc, who made his first stop shortly after. As the race neared the half way point, Mercedes had become acutely aware of Red Bull’s strategy and the threat it posed for the win.

“Verstappen is the real threat here, if he is one stopping,” Hamilton was told by his race engineer. The situation became more critical for the championship leader on lap 24 when he noticed damage to his hard tyres. “Blistered the right front,” came the message from Hamilton to his team. Verstappen eventually stopped for medium compound tyres after 27 laps and emerged just behind Bottas. He quickly took advantage of DRS and fresh tyres to move alongside at Brooklands and regained the lead at Luffield.

Things did work out well for Ricciardo during the second stint of the race and he pitted for a second time on lap 27.

Sebastian Vettel was also unhappy with the way in which his race had unfolded and found himself stuck behind the McLaren of Carlos Sainz. “It is in the gap that we didn’t like,” Vettel radioed to the team. “We spoke about it this morning. I’ll hang in there, but you know that you’ve messed up,” he added.

Daniel Ricciardo’s hopes for a points finish came to an end on lap 32, in what he later described as as a ‘Seb’ moment. He took too much kerb when Sainz challenged around the outside and suffered wheelspin as he went for the throttle at the exit of the corner. He was then forced to stop again with damaged tyres and was fitted with a used set of hard tyres for the rest of the race.

“Unfortunately, the last few years it’s a bit of a ‘Seb spin’ when you’re the inside car, then as soon as you get on the throttle you lose it,” Ricciardo told the-race.com. “He did it with me in Austin in 2018. It’s one I don’t think I’d experienced yet. I could see Carlos and you’re trying to squeeze a little bit but not have contact, and then as soon as I opened the wheel and then got on throttle it just went around. When you are in such close vicinity to another car on that side angle, you lose a chunk of downforce that’s normally coming in from that side and keeping the car down so I think it’s just a very quick loss of downforce and it can obviously catch you out. It was a little bit of salt in the wounds. By that point we were already on the back foot, I don’t want to say it was over but then with that I just wanted to roll over a little bit and just put my head down! Not a fun afternoon in the end.”

Verstappen and Bottas pitted together on lap 33, which gave Hamilton the lead for the first time in the race. In what looked set to be a repeat of the previous week’s British Grand Prix, Hamilton held a 7.8 second lead over Verstappen with a little over 10 laps left to run. The Red Bull driver was predicted to catch the leader on the penultimate lap of the race.

There was to be no such repeat however as Hamilton stopped for a second time on lap 42 for hard tyres and returned to the race in 4th place, 6 seconds behind Leclerc. Hamilton moved past the Ferrari at Stowe on lap 46 and set after Bottas.

Max Verstappen had already established a race winning 7 second lead over Valtteri Bottas as Lewis Hamilton closed in on his teammate.“You are free to race, just keep it clean,” was the message given to both Mercedes’ drivers for the final 3 laps of the race as Hamilton closed in on the #77 Mercedes for second place. 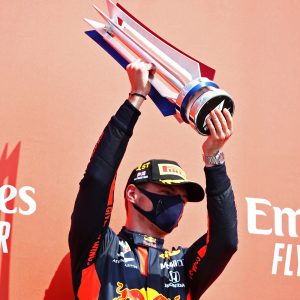 Hamilton used the advantage of DRS to drive past Bottas on the Wellington straight with two laps left, his cause aided by a noticeably blistered left rear tyre on the Finn’s car.

YESS BOYSS!! I’m incredibly happy with this win, I didn’t see this one coming! 💪 Thanks to @redbullracing and @HondaRacingF1 for their continued hard work 👏 Now let’s celebrate and hydrate🏆🍾👏 #KeepPushing # F170 🇬🇧 pic.twitter.com/hpymhkoq79

“I didn’t see it coming,” Max Verstappen told Sky Sport’s Martin Brundle. “After the first stint it seemed like we were pretty good on tyres and there was a question mark on how Mercedes were going to go on the hard tyre. We had a lot of pace in the car and I didn’t really have any issues with the tyres at all, so I kept pushing. An incredible result, of course, to win here. We had a great day, everything worked out well, we had the right strategy. I am incredibly happy to win.”