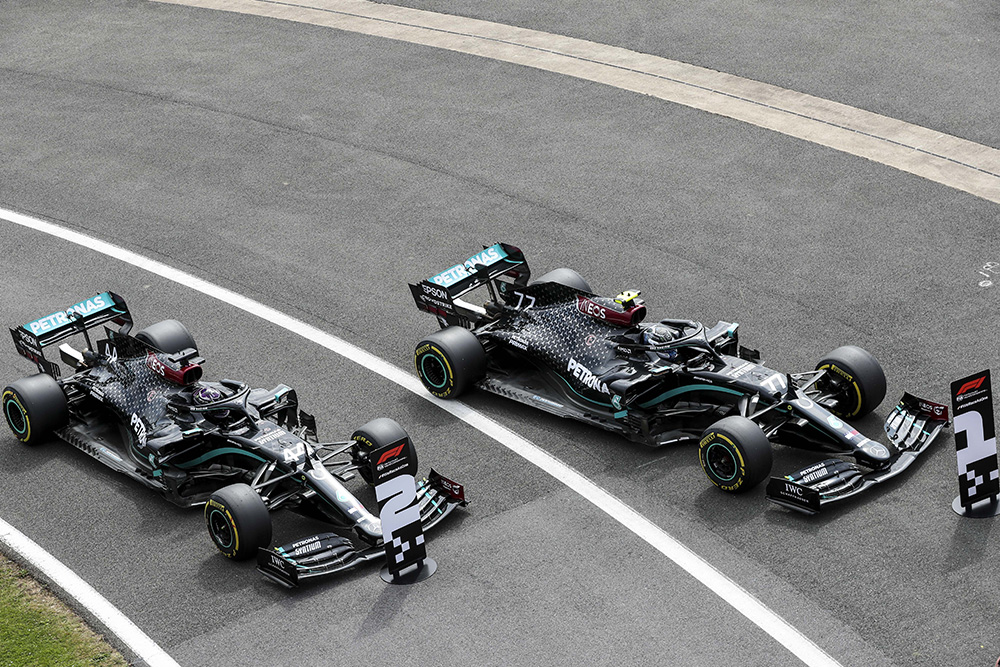 Mercedes teammates Valtteri Bottas and Lewis Hamilton were barely inseparable at the conclusion of qualifying for the Emirates Formula 1 70th Anniversary Grand Prix at Silverstone Raceway with the former taking top spot.

Bottas’ pole time of 1:25.154 was just 6/100ths, less than one car length ahead of the championship leader, while Nico Hulkenberg snared third place for Racing Point in the dying seconds. Daniel Ricciardo had looked set to give Renault their best qualifying result since 2010, but dropped two places in the blink of an eye as both Hulkenberg and Max Verstappen found time in their final flying laps.

Qualifying shifted focus from the ongoing controversy that had overshadowed what was billed as a celebration of a 70 year milestone for Formula One. Perhaps, rather ironically, the arguments and accusations surrounding the eligibility of the 2020 Racing Point cars mirrors many similar events that has gone hand-in-hand with Formula 1 since its inception in 1950. Hulkenberg’s qualifying result may well have fanned the flames of discontent along the pit lane.

Racing Point management had been called before the Stewards at the commencement of the weekend to be told that a protest from Renault, regarding the eligibility of the Racing Point RP20, had been upheld. The RP20 was the ongoing topic of debate since the car’s launch, with it dubbed the ‘Pink Mercedes’ in recognition of the startling similarities to the 2019 Mercedes F1 W10 EQ.

After the Styrian, Hungarian and British Grands Prix, Renault lodged protests with stating that the brake ducts on the RP20 were an direct copy from 2019 Mercedes.

Racing Point has been subsequently fined €200,000 for fielding Sergio Perez’s car in Styria and the same amount for Lance Stroll. 7.5 world championship points per car were deducted from their manufacturer’s tally, though Perez and Stroll kept their drivers’ championship points. The Hungarian and British Grands Prix protests were also upheld, with Racing Point reprimanded without further penalty for both events. The decision of the Stewards added that Racing Point would be permitted to use the offending brake ducts for the remainder of the season without further sanction, noting that it would be impossible to unlearn the intellectual property associated with the brake duct design.

“We are still trying to digest it, we need to ask some questions and get further clarification,” Racing Point team boss Otmar Szafnauer told F1.com. “It’s a bit disappointing. We thought we are well within the rules and did absolutely nothing wrong. We invited the FIA in March to come and view everything that we did. We had full disclosure. Thereafter, they wrote to us and said we were completely compliant. So that’s a bit disappointing. However, we now have to assess the sanction that was given.”

Five teams, including Renault, Ferrari and McLaren had indicated their intent to appeal the leniency of the penalties, while Racing Point is set to challenge the severity of the decision.

Bottas, Hamilton, Albon and Verstappen headed the timesheets as the first stage of qualifying came to an end. Daniil Kvyat was eliminated after his fastest lap was excluded for exceeding track limits and joined Kevin Magnussen, Nicholas Latifi, Antonio Giovinazzi and Kimi Raikkonen in the bottom five.

“Yeah, I think something on the floor broke,” Kvyat said to add insult to injury for the Alpha Tauri driver as he coasted back into the pit lane.

Esteban Ocon, Romain Grosjean and George Russell were eliminated in Q2 as were Carlos Sainz and Sebastian Vettel. For Vettel it was just another moment in a disappointing visit to Silverstone as his Ferrari struggled to match the pace of teammate Charles Leclerc. It was another blow for the German who lost both track time as well as an engine during FP2 the day before.

“No warning,” replied Vettel F1.com when asked about the failure. “It was very sudden and obviously a failure so now we have to see what it is. But it will probably take a couple of days because the engine will get shipped back and analysed.”

While most of the top 10 ran the red soft tyre in Q3, both Bottas, Hamilton and Ricciardo ran the yellow medium tyres for their final laps. Bottas finished on top from Hamilton, Hulkenberg, Verstappen and Ricciardo. Stroll, Gasly, Leclerc, Albon and Norris completed the top 10.

“Yes, Yes, Yes, Yes, Yes, it’s good!” Exclaimed a clearly jubilant Bottas on his cool down lap. “It’s a good feeling,” he told Paul Di Resta in the top 3 interview. “I just love qualifying, particularly when it goes well. I’m pretty proud of myself and I think that set-up wise we made good steps from last week.”

“Yes, crazy last week, or last couple of days whatever it is now,” Hulkenberg said. “All the highs to come back then the lows. This week I feel more comfortable in the car. Qualifying was tricky and I made life a bit hard for myself in Q2 and damaged the car. Q3 was head down and drive hard. Bit surprised, to be honest, to stand here, but obviously there is a big smile on my face.”

“I think everyone was a bit surprised with P3 yesterday and I think that there was a little bit of pressure on the team to repeat that today,” Daniel Ricciardo told Sky Sport. “I don’t think anyone expected P3 but somewhere around where we are. So to do it, P5, I’m stoked. Pretty much every lap in that session, when I crossed the line I exhaled and thought I got the most out of it on every lap.”