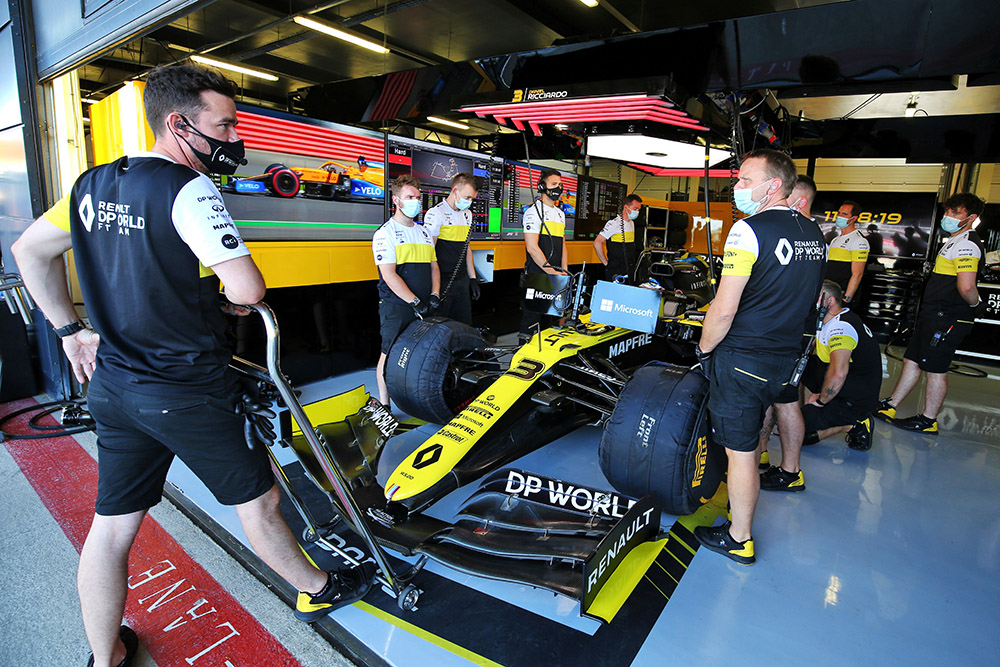 Daniel Ricciardo ended the day in the top three after recording the third fastest time in Free Practice 2 on Pirelli’s Soft (C4) tyres. Team-mate Esteban Ocon set his Soft tyre lap slightly earlier in the session and was half a second adrift of Daniel in tenth place.

Today’s temperatures at Silverstone peaked at over 31C with the wind direction also playing a part throughout both sessions.

In FP1, both drivers ran aero assessments on various components, while gaining an early understanding for the Soft tyre, which is a step softer from last weekend.

For FP2, evaluations on the Soft and Hard tyre compounds continued with the usual mix of low fuel followed by high fuel running throughout the afternoon.

What we learned today:
We’re pleased with today’s running and we’ve learnt a lot on the three tyre compounds. There are key decisions on strategy to make ahead of qualifying and the race.

Daniel: “In the morning we did quite a bit of data gathering so we knew it wasn’t going to be totally representative. For the afternoon, we had a bit of a warm-up, made a change to the car, which worked, and it felt great. We had a good run on the Hard and then on the Soft as well. On that Soft run, we still missed out a bit in some areas, so there’s definitely more there. Our long runs also looked decent, so that’s a good base for Sunday. I think the wind direction is changing tomorrow, so we’ll see what happens there. Overall, it’s been a good day for us.”

Esteban: “The first thing we wanted to understand was the softer choice of tyres and that was an important area today. It looks positive and the car was clearly quite quick. Daniel’s run on the Soft was certainly fast, which is good as we both tested different things and it’ll be interesting to see the comparisons. Hopefully we can repeat that tomorrow. We had a few problems here and there, but nothing too crazy and the car generally felt reasonable all day.”

Ciaron Pilbeam, Chief Race Engineer:
“We’ve had quite a good day with both cars getting through their programs smoothly. Our focus in the morning was on various aero assessments and we spent some time in both sessions understanding the Soft tyre in particular, which is a step softer this week. We’re pretty happy with our work today. Everybody ran the same tyres in the morning session, but we have done something different with our tyres compared to most others in the afternoon, and it will be interesting to see how the consequences of that shake out through the rest of the weekend. Both drivers are happy with their car and as normal for a Friday, we have some work to do to find a little bit extra for tomorrow. Daniel’s Soft tyre run in the afternoon was quite quick, but it’s only Friday, so we’re not getting too excited!”