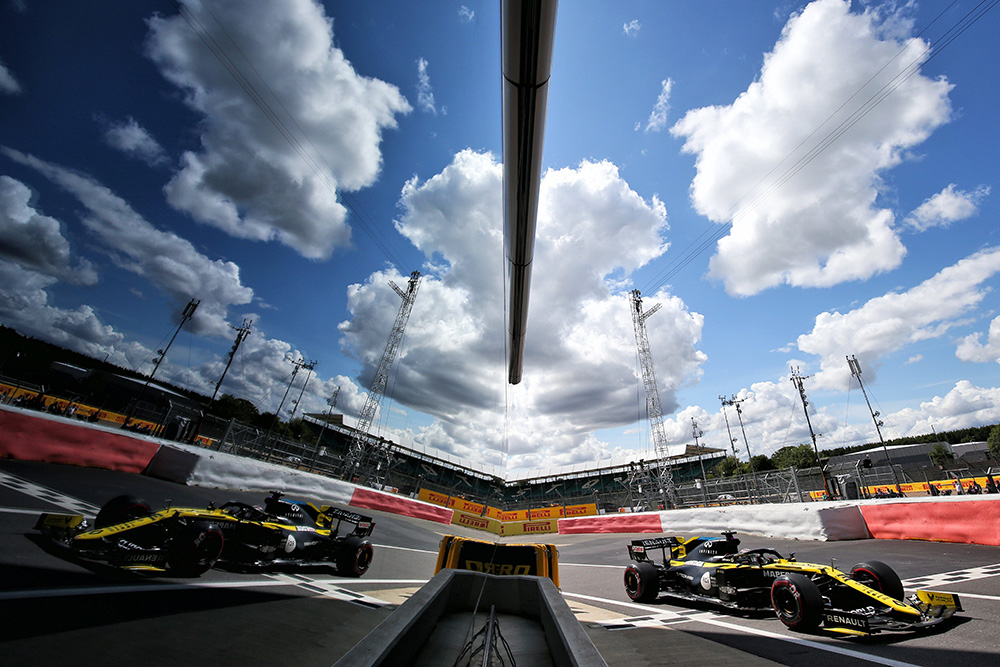 With the race drawing to a close, the team was set for a good haul of points with Daniel occupying sixth and Esteban eighth. But debris left on the track in sector two meant Valtteri Bottas and Carlos Sainz picked up punctures allowing both drivers to gain places. Daniel further benefitted after overtaking Lando Norris just before the incidents, before finishing just 1.1seconds from a podium place.

After a lightning start, Daniel gained two positions on the opening lap, progressing from eighth to sixth. Esteban was also out the blocks quickly – side by side with Daniel into the opening two corners – before maintaining ninth place by the end of the first lap.

After an early safety car, both drivers remained out on Soft tyres. A second safety car on lap 12 allowed the team to double stack both cars with Daniel first in for Hards and Esteban immediately following suit for the same compound, with minimal time lost courtesy of a slick change from the pit crew.

The midfield fight from fifth through to tenth was tight throughout with Daniel and Esteban showing solid race pace and looking set for a solid points haul.

Esteban managed to make his move on Lance Stroll for eighth before benefitting from Bottas and Sainz’s punctures with Daniel diving for a late move on Norris to snatch fourth.

Daniel Ricciardo, started P8, finished P4:
“It was a crazy race at the end, and it feels really cool to take fourth place. We made a good start, jumped up to sixth and we showed decent pace. At the safety car restart I was close to Carlos [Sainz] but didn’t have enough and that allowed Lando [Norris] to have a run on me and I missed out there. That was a bit frustrating, but it came back to us at the end. The race really came alive and that was really good. We had some pace at the end and I was able to get Lando and then Carlos had a problem. I saw Charles [Leclerc] getting closer and maybe with a couple more laps we could have had a podium! We have another chance next week. We were assisted by some chaos, but we were definitely a top six car today and that’s pleasing.”

Esteban Ocon, started P9, finished P6:
“I’m very happy with today’s team result. It was very fun out there, lots of overtaking, lots of fun battles and a fantastic result to finish it off. I think today shows how quick our car is in the race. It really felt awesome today and it was a strong performance from the team. It’s a credit to everyone at Enstone and Viry for their hard work between Budapest and this race. We had a lot of discussions, and that’s really paid off today. It proves that we need to qualify further up to make our life easier on Sunday. We have another opportunity next week for more.”

Cyril Abiteboul, Team Principal:
“It was a very good result from a team perspective and one of our strongest since our return to Formula 1. It is particularly good here in Silverstone, a temple of the Formula 1 championship and one of the home races for the team. Clearly, there was a bit of help towards the end to gain positions, but that should not take away from the very strong performance that the team has put in throughout the weekend. We had a decent Friday practice and that meant both good preparation for qualifying with both cars in the top ten as well as critical learning about making the Hard tyre last in the race. Today, both drivers had a strong opening lap to have track position and then we decided to stop both cars for Hards under the safety car, which the pit crew did an excellent job on. We also had strong reliability and that’s so important when we have eventful races like this one. After tracks where the car struggled, Silverstone’s layout confirmed the strengths and weaknesses of the car. In particular we must keep working on high-speed corners as that’s our weakness compared to direct rivals. We have made progress but we should not lose sight of our direct competitors nor of the competitiveness level of Mercedes in all circumstances.”