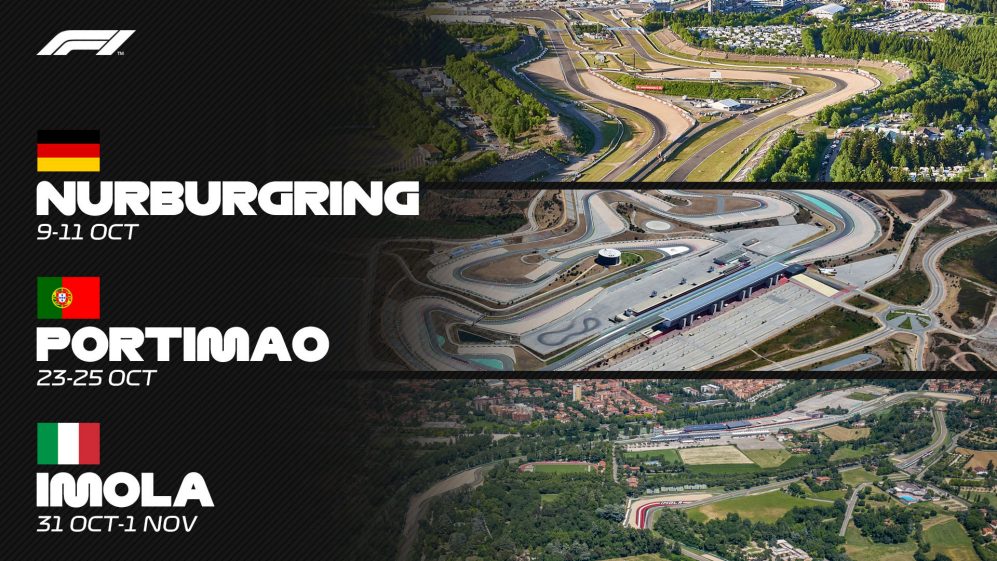 Grand Prix racing will return to Portugal for the first time since 1996 after Formula 1 added races in Portimao and at the classic circuits of Imola and Nurburgring to the 2020 calendar.

The Algarve International Circuit in Portimao will play host to the Portuguese Grand Prix – its first-ever F1 race – on October 23-25, two weeks after the Eifel Grand Prix at Germany’s Nurburgring.

And a week on from that historic race in Portugal, the Autodromo Enzo e Dino Ferrari in Imola will reverberate to the sound of F1 engines for the Emilia Romagna Grand Prix, which will be a two-day event. The exact format of the Imola weekend has yet to be agreed, but it is expected that there will be only one practice session ahead of qualifying and the race.

It will be the first time since 2006 and 2013 respectively that Imola and Nurburgring have hosted F1 Grands Prix.

The new races added to the 2020 calendar

The announcement brings the number of races on the 2020 schedule to 13, with 10 races – including a new race in Mugello – having previously been announced. As stated previously, Formula 1 expects the revised 2020 season to have between 15 to 18 races, ending in the Gulf region in mid-December.

Final details of the calendar will be released in the coming weeks, but due to the ongoing Covid-19 pandemic, local restrictions and the importance of keeping communities and personnel safe, Formula 1 has confirmed it will not be possible to race in Brazil, USA, Mexico and Canada this season.

“We are pleased that we continue to make strong progress in finalising our plans for the 2020 season and are excited to welcome Nurburgring, Portimao and Imola to the revised calendar,” said Chase Carey, Chairman and CEO of Formula 1.

“We want to thank the promoters, the teams, and the FIA for their full support in our efforts to bring our fans exciting racing this season during an unprecedented time.

“We also want to pay tribute to our incredible partners in the Americas and look forward to being back with them next season when they will once again be able to thrill millions of fans around the world.”