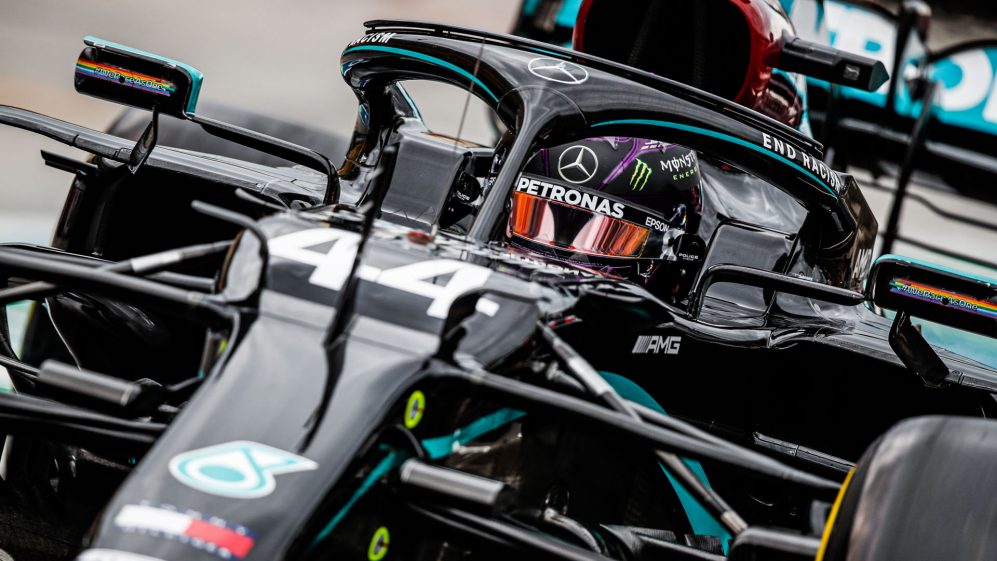 Every time you think you’ve seen the best of Lewis Hamilton, the reigning world champion steps it to another level. The Briton was in imperious form at the Hungaroring – a place he could call his backyard so successful has he been at the Hungarian Grand Prix – as he took a breath-taking pole position for Mercedes.

The predicted rain never materialised, with Mercedes looking super comfortable from the off, easing through the opening segment of qualifying and then cruising into Q3 – on the medium tyres no less. And when it came down to the fight for pole, the Silver Arrows turned their power units up and stretched their legs.

Hamilton set a new track record with his first effort, and despite a few drops of rain in the air, he improved by over a tenth on his second and final run. The Mercedes W10 looked glued to the track as he danced it around the tight and twisty Hungaroring to take his 90th career pole and seventh in Hungary.

His team mate and championship leader Valtteri Bottas didn’t make it easy for him, mind, the Finn improving on his second run but just missing out by 0.107s, as world champions Mercedes locked out the front row.

Racing Point have been raising eyebrows since pre-season testing, not only because they looked tantalisingly quick but also for the similarities the RP20 shares with last year’s all-conquering Mercedes W10.

In Hungary, they have emerged as Mercedes’ greatest threat, and the only other team quick and brave enough to qualify in Q2 on the medium tyres. It’s a sensational feat, given they have not started higher than 16th in Hungary in either of the last two years.

Lance Stroll was the most impressive, taking third for only his second career top-eight start, with Sergio Perez taking fourth in his first Q3 appearance in Hungary since 2013.

Ferrari showed a renewed turn of form after the misery of Austria, with Sebastian Vettel taking fifth – the team’s best performance of the season – around half a tenth quicker than team mate Charles Leclerc as both red cars made it into Q3 for the first time in 2020.

There was less joy over at Red Bull, with Max Verstappen – who will have had high hopes of challenging for victory coming into this weekend – down in seventh – his worst performance in Q3 since the 2018 Belgian Grand Prix. His team mate Alex Albon didn’t even make the pole position shoot-out, after having his final run ruined by traffic.

Lando Norris and Carlos Sainz proved McLaren made good gains overnight with both making it into Q3, as they slotted into eighth and ninth respectively, with Pierre Gasly completing the top 10, having opted not to set a lap time after engine troubles in the session.

Q1 – Williams get both cars through, as Racing Point set the pace

There was a queue to get out of the pit lane at the start of the session, thanks to the lingering rain clouds above the track. Mercedes comfortably set the early pace, with Hamilton beating team mate Bottas and the two Racing Points lining up third and fourth.

Red Bull, who broke curfew to make set-up changes overnight, appeared to struggle out there with Albon lamenting on team radio that he had no stability in low speed turns. Their sister team AlphaTauri were having a tough time, too, with Gasly reporting he had a big problem with the power unit.

The pecking order to be set as the session headed into the closing stages, only for the track evolution to ramp up dramatically – with George Russell taking advantage to go a sensational fifth, which became ninth at the chequered flag.

He was joined by team mate Nicholas Latifi as Williams got both cars out of Q1 for the first time this year. Mercedes sent both their cars out again albeit on used tyres, so quick was the track evolving, but they were ultimately safe – as the two Racing Points ended the first part of qualifying first and second.

Ferrari’s customers really struggled, the lack of power evident, with both Haas and Alfa Romeo cars getting the chop, along with AlphaTauri’s Daniil Kvyat. This was another woeful session for Raikkonen, who was eliminated in Q1 in four successive races for the first time since this uqalifying format was adopted in 2006.

Racing Point are renowned as a slick racing operation and they proved it once again in the second segment of qualifying, boldly choosing to run the medium tyres – so they could start the race on that rubber – which is 0.5s slower per lap than the soft.

It was a risk, but both Perez and Stroll made the strategy work to progress into Q3, with Mercedes the only other team who managed to achieve the feat. Everyone else who got through was on the softs.

Elsewhere, there was a stunning job from Gasly, who complained about an engine issue but was told unfortunately he just had to do his best with what he had as they couldn’t fix it. He duly did just that, and it was enough to take him through to Q3.

Red Bull had mixed fortunes, with Verstappen comfortably making it through while his team mate Albon was released into traffic on his final run and failed to improve, forcing him out of qualifying in 13th, one place behind the very impressive Russell in the Williams.

Both Renaults also failed to make the cut, Ricciardo getting out of shape out of the last corner, along with the second Williams of Latifi.

Ferrari have had a dreadful start to 2020, but they received a boost in Hungary with a car that was upgraded for Austria performing well enough to allow them to lock out the third row, with Vettel having the edge over his younger team mate Leclerc.

But in terms of pole position, the fight was exclusively a battle between Hamilton and Bottas, with the former having the edge early on. He then went one step better next time around to clock a track record, with Bottas slotting into second to give Mercedes a 65th front row lockout.

“It felt great, just in general, qualifying all together felt really solid,” said Hamilton. “We were just constantly pushing the bar higher. To get to drive a car like this around here is just awesome. Turn 11 was nearly flat for us today which is quite insane, the speeds we go through there.

“It’s impressive to see how far the technology has advanced. Valtteri did a great job today, applying a lot of pressure. Hungary has always been a good hunting ground for me, but also I’m aware that there’s a long run down to Turn 1.”