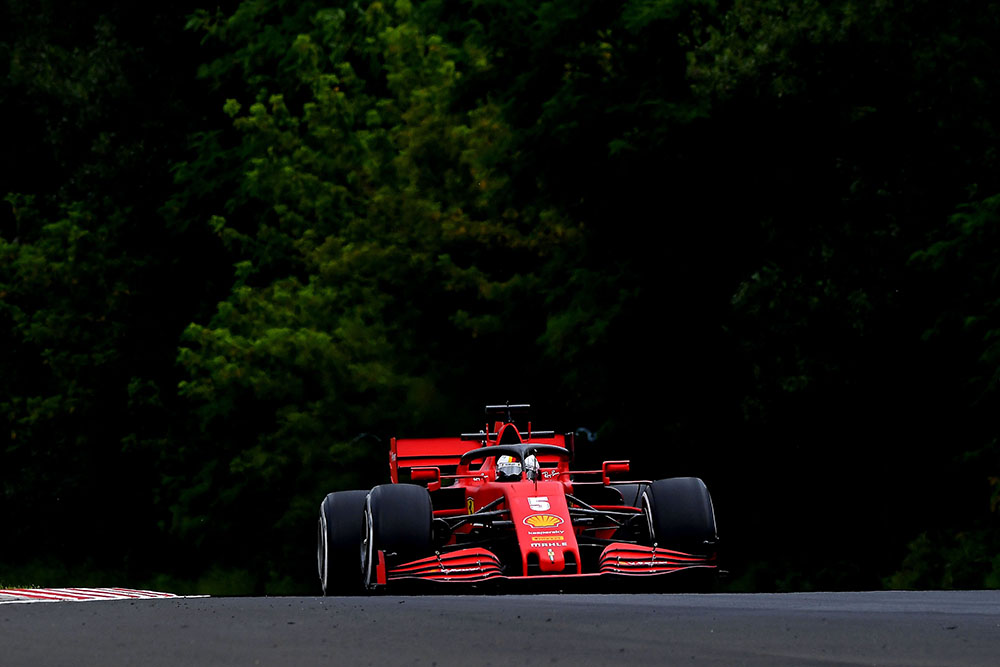 There was a brief glimmer of hope amongst an otherwise bleak day for Ferrari, when Sebastian Vettel set the fastest time in the second practice session. Lewis Hamilton set the fastest overall time on the day and sent an ominous warning to the field in doing so on the hardest compound tyres. The rest of the top 10 were a mix of medium and soft compound runners.

Overcast skies greeted the Formula One paddock at the Hungaroring but remained dry throughout the session. Lewis Hamilton stamped his authority with a 1.16.003 on the white hard compound tyres, to head Valtteri Bottas by a little under 1/10th of a second. Sergio Perez and Lance Stroll completed a Mercedes powered 1-4 in their Racing Point cars, but did so on the red soft tyre compound tyres. Stroll lapped almost one second slower that Hamilton.

“We got everything done that we needed to in the first session”, Lewis Hamilton stated. “The car felt good out there in FP1 although there was still some work to do, so we made some changes for the second session – then it rained, so we’ve still got learning to do tomorrow. The wet conditions in FP2 didn’t really leave us with a lot to do, so we just completed an installation lap on the Intermediate tyres. This is such a great track to drive in the dry, but it’s very tricky in the wet and it felt quite low grip out there today.”

Daniel Ricciardo was fifth in what was an encouraging start to the weekend for the Australian, who had completed his best laps on the yellow medium compound, 1.1 second behind Hamilton.

“The morning was pretty good and I felt we got into it right from the get-go, said Ricciardo. “It was a bit like the first session in Austria, when we got into the track quite quickly and found a solid base set-up straight away. I’m happy with the start to the weekend and I’m feeling good. It was too wet in the afternoon, so we took it easy on the Intermediates, meaning we save a set of Wets for tomorrow.

“FP1 was not what we wanted and we have a lot to look into”, Verstappen admitted. “It’s a shame that it was raining this afternoon for FP2 because we already had a few things to change and we could have had a good comparison to work from. Luckily, we have overnight to look at the data and for sure we will make some changes and try to improve the overall balance for tomorrow.”

Heavy rain lashed the circuit just as the Formula 3 qualifying was about to commence and stopped track activity shortly after. Standing water and continuous rainfall made the circuit too dangerous for high speed driving. As the rain began ease, track officials took to the circuit in heavy vehicles equipped with large blades at the front to sweep the water from the circuit.

Pierre Gasly was the first to venture out on track after missing the morning session with a mechanical issue in his Alpha Tauri. In all only 13 drivers recorded a time throughout the session as many elected to run a single installation lap on intermediate tyres and preserve a set of wet compound tyres for qualifying. Lewis Hamilton and Daniel Ricciardo were amongst those not to set a time. Sebastian Vettel raised the hopes of the tifosi with the fastest time in FP2 from Bottas, Sainz, Stroll, Perez, Gasly, Verstappen, Grosjean, Raikkonen and Leclerc, who was over 3 seconds slower than his teammate.

“I think this morning was ok. This track should be a bit better for us and let’s hope that’s the case tomorrow, but we won’t know until we hit qualifying. We did more laps than others in the wet, because after the weaknesses we showed last week, we need to understand the car a bit better. We need laps to gain confidence in the car. It’s not a secret that there’s still a lot of homework to do, but overall we seem to be a bit more competitive.The weather looks like being changeable in the next few days, but if it’s dry like Austria, it’ll be ok as we were also good this morning on a dry track. I am looking forward to tomorrow.”