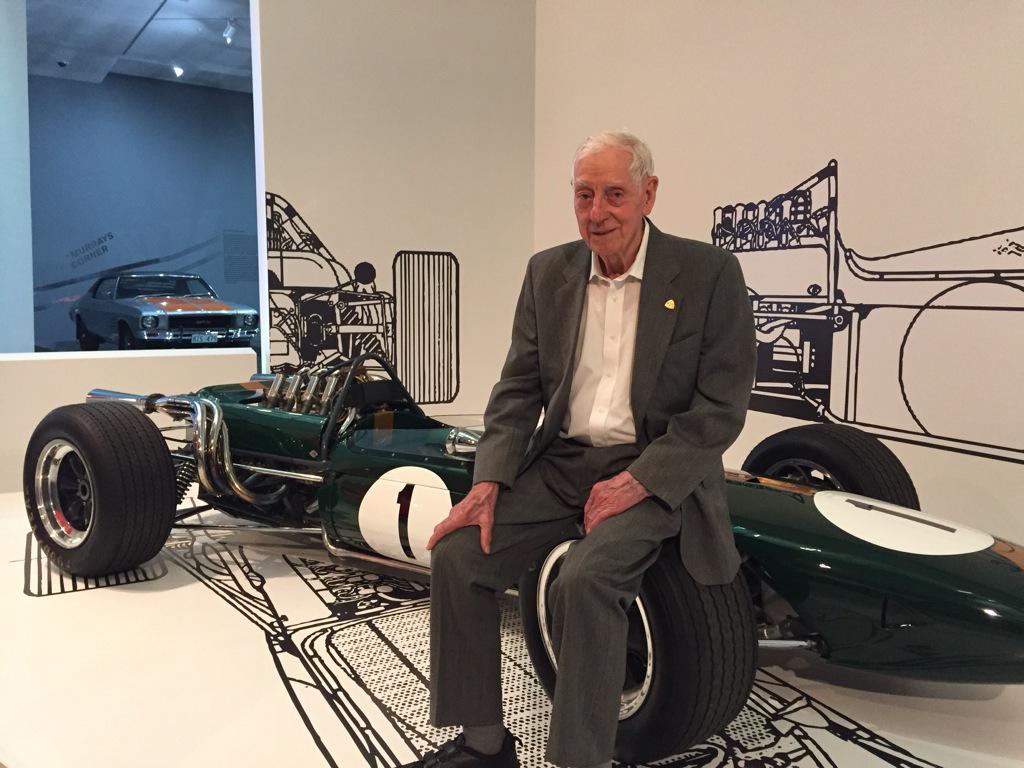 The say ‘Behind every good man is a good women.’ That being true, then behind every great driver must be a great engineer and Ron Tauranac was amongst the best in the business. From Bondi to Brands Hatch, Tauranac took Australian ingenuity and engineering skills to the very pinnacle of the world stage and played a key role in a unique piece of world sporting history.

Ron Tauranac was Jack Brabham’s right hand man when the pair formed Motor Racing Development in 1961, the name changed shortly after to Brabham Racing Developments (BRD) after the initial moniker bore a disturbing similarity to a controversial French term.

In his autobiography “When The Flag Drops,” (William Kimber and Co 1971), Brabham wrote; “From the time I first made contact with Ron Tauranac in the very early hill-climbing days, we kept in touch by letter or by meeting up each year when I went back to Australia for the season’s racing… I often suggested to Ron that he should come to England, but it took a couple of years for this to sink in…Ron was always the draughtsman, the boffin, the chap behind the drawing board. Our cars were always a combination of ideas from track results, driving and testing plus collaboration between Ron and myself. The idea people were apt to get from the press, that Jack Brabham built a Grand Prix car all by himself in his back garden is a bit far from the truth. I was the instigator of the project and already well known as having twice won the World Championship. It was reasonable to call the new cars Brabhams. But the type number has always been preceded by the letters BT – B for Brabham and T for Tauranac.

Ron Tauranac was born on 13 January 1925 in the county of Kent. His family migrated from England to Australia some three years later and settled near Newcastle, where his father found work as a boilermaker. The engineering trade soon sparked an interest in Ron that would last a lifetime.

Tauranac left school when he turned 14 and gained employment with the Commonwealth Aircraft Corporation in 1939. Four years later Ron was accepted into the RAAF and trained as a fighter pilot. At war’s end, Tauranac took a position with a steel merchant before moving on to engineering work. The experiences proved invaluable as Ron gained a detailed knowledge of metals and their potential applications. A move to the Colonial Sugar Refinery (CSR) in 1947 then led to a first meeting with Jack Brabham.

“When I was at CSR, there was a company called Quality Castings that we subcontracted most of the stainless steel casting to,” Ron Tauranac explained (Retro Ron Tauranac on Brabham, Chapman by Mark Glendenning Racer Magazine December 13, 2016). “So they offered me a job as works manager. I went there and met Jack [Brabham] by chance, and used to subcontract work for him, which is how we built up the relationship. He had a little one-man machine shop. We got talking, got friendly, and then I helped do design work on his car and he did machining for mine.”

Motorsport came to the Tauranac household almost by chance one Sunday afternoon in 1949, as Ron later recalled, “We were on a Sunday afternoon drive and I heard this noise, so I stopped and looked, and there were cars rushing up and down the airstrip. And I thought, ‘well, I wouldn’t mind doing that”.

With little money, Tauranac teamed with brother Austin to build their first open wheel machine,The Ralt (Ron and Austin Lewis Tauranac) Special powered by a Norton 500cc engine. By 1954 Tauranac had refined the design and went on to beat Brabham in the 1954 NSW Hillclimb championship.

Ron Tauranac and Jack Brabham kept in touch after Brabham moved to England in the mid 1950s. The pair exchanged ideas and Tauranac engineered components for a number of Jack’s projects. As Brabham gained success with the 1959 Formula One World Championship, his thoughts turned to more ambitious projects and he eventually enticed Tauranac to move his family to England.

“When Jack was back in 1960, he offered me a return air ticket to go over and see if I liked it for six months,” Tauranac told Racer Magazine. “I swapped the return air ticket for one air ticket for me one-way, because I had to go via L.A. to look at a race at Riverside. I helped run his Cooper there in the sportscar race. And my wife and kid got on the boat and went over. In 1960, that was a hell of a step. I don’t know why I didn’t think about it more!”

The move led to formation of Brabham Racing Developments. From 1962 to 1970 Tauranac worked alongside Jack Brabham in the design, manufacture and development of their cars, from Formula 3 to Formula 1 as well as a number of sport car projects. Their first car, the MRD Formula Junior was ready in the summer of 1961 and Australian driver Gavin Youl finished second to Alan Rees’ Lotus on its debut. That began a successful business in the lower formula or Tauranac and BRD, with the sale of customer cars financing a progression to Formula 1.

1964 was a breakthrough year for BRD. Jack Brabham and teammate Denis Hulme finished 1-2 in the Formula 2 Championship in the Brabham BT10, while Dan Gurney scored the first Formula 1 victories for Brabham at the French and South African Grand Prix.

The pinnacle of success for Brabham and Tauranac came in 1966, when Jack Brabham became the first and only driver to win the Formula 1 World Championship in a car bearing his name. The Brabham BT19 incorporated a Repco designed V8 engine for the new three litre category.

“We weren’t talkers, either of us. We’d speak if we had something to say, but never had an argument.” Tauranac replied when asked about the secret to their partnership. (Motorsport Magazine January 2014).

1967 saw Denis Hulme, a former team mechanic, claim a second and final title for BRD. Engineering developments and the introduction of commercial sponsorships, saw Brabham remain competitive with the space frame chassis, though championship success eluded them. A move to a Monocoque chassis with the Brabham BT30 in 1970 revived the team with victory for Jack in South Africa and podiums at Monaco, France and Great Britain.

Brabham’s departure at the end of 1970 changed the team dynamic. “Jack and I would stay with the mechanics until 10 o’clock at night,” Ron said.”  (Ron Tauranac-The Pragmatist Motorsport Magazine January 2014). ”Then we’d have dinner. But when Jack was no longer driving, there was no one with whom to eat dinner or, indeed, socialise at all. I didn’t like that very much.” 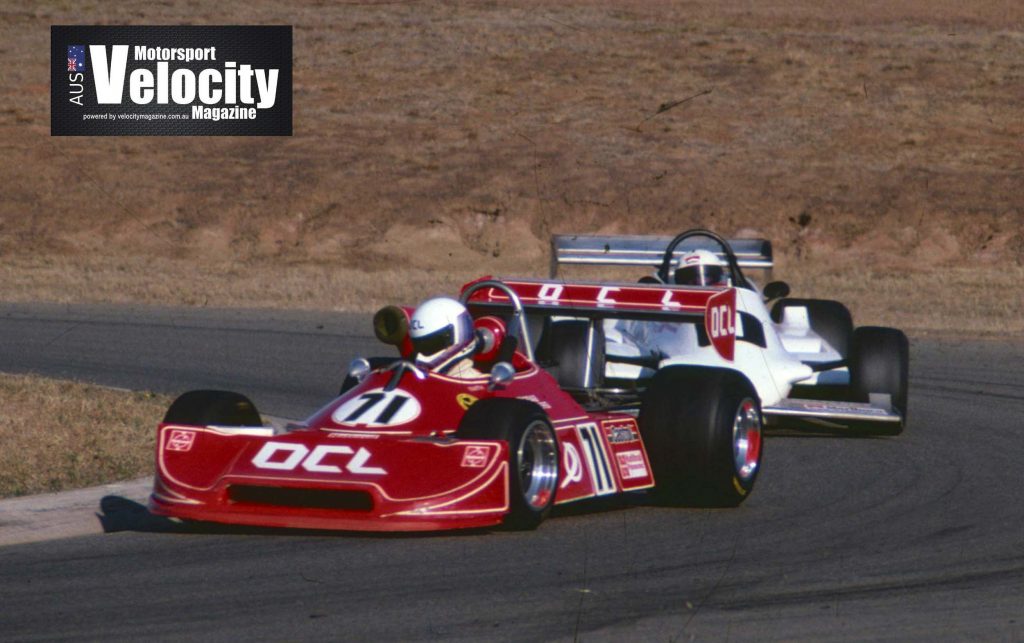 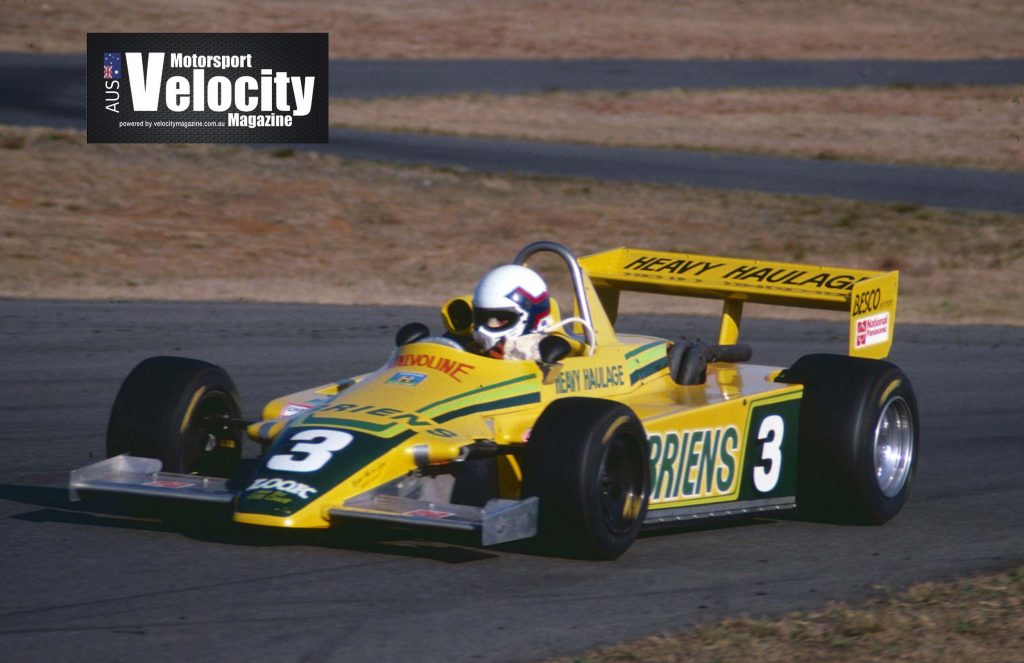 Ron Tauranac took control of BRD after Jack Brabham’s retirement and subsequent return to Australia and ran the team until an overture from Bernie Ecclestone at Monaco in 1971 led to the sale of the team. Tauranac was offered a partnership with Ecclestone but declined, deciding that he had already shared such an experience with a valued friend. Offers came from Lotus, Trojan and Williams, which gave some consultancy work until another chance meeting in 1975 brought a new opportunity knocking on his door.

”Larry Perkins drove up my driveway with a GRD car on a trailer and asked if I’d have a look at it and see if I could recommend some improvements,” Ron Tauranac explained. (Racer Magazine 2016).”I wandered around it and said, ‘well, I think it would be easier to start again’, and he said, ‘well, let’s do that!’ My wife wanted to get me out of the house, because I’d always worked seven days and five nights and now I was home most of the time, except for a bit of consulting work. She saw a factory advertised and that was the start of Ralt, so all of these things are a little bit by luck.”

Tauranac revived the Ralt name with the RT1 and formed Ron Tauranac Racing. Larry Perkins and brother Terry drove the cars to first and fourth respectively in the 1975 FIA European Formula 3 Cup. The car featured a logo designed by Ron’s 13 year old daughter Julie. The new company produced 165 versions of the RT1 from 1975 to 1979. The Ralt RT2 and RT3 gained considerable success in European racing in the early 1980s, winning the Formula 2 championship three times from1981-84. The RT4, built for the Formula Pacific/Atlantic categories was another success story for the company. Over 1,000 Ralts were produced during Tauranac’s time with the company.

“Ralt was so much more successful than Brabham as a company,” Tauranac said, “but we didn’t do F1 and so didn’t get the publicity.” (Ron Tauranac-The Pragmatist Motorsport Magazine January 2014).

Ron Tauranac moved back to Australia following the sudden death of his wife, Norma, in 2002. He was awarded the Order of Australia that year, and was later inducted into the Motorsport Australia Hall of Fame in 2017.

He passed away peacefully on Friday 17 July, aged 95. The Tauranac family released a statement that same day.

“The Tauranac family regretfully announces the loss of Ron Tauranac at the age of 95.

Ron passed away peacefully in his sleep during the early hours of Friday morning at his home on the Sunshine Coast in Queensland, Australia. Active, healthy, and independent until the end, he felt the need to constantly achieve something and always had the next goal in mind. He was never one to rest on his laurels, with his sharp engineering mind always engaged. When asked recently what the best car he designed was, he responded simply ‘the next one’. He led an extraordinary life. We are both incredibly proud of what he achieved and deeply saddened by his loss.”

Velocity Magazine would like to pass on our condolences to the Tauranac family.