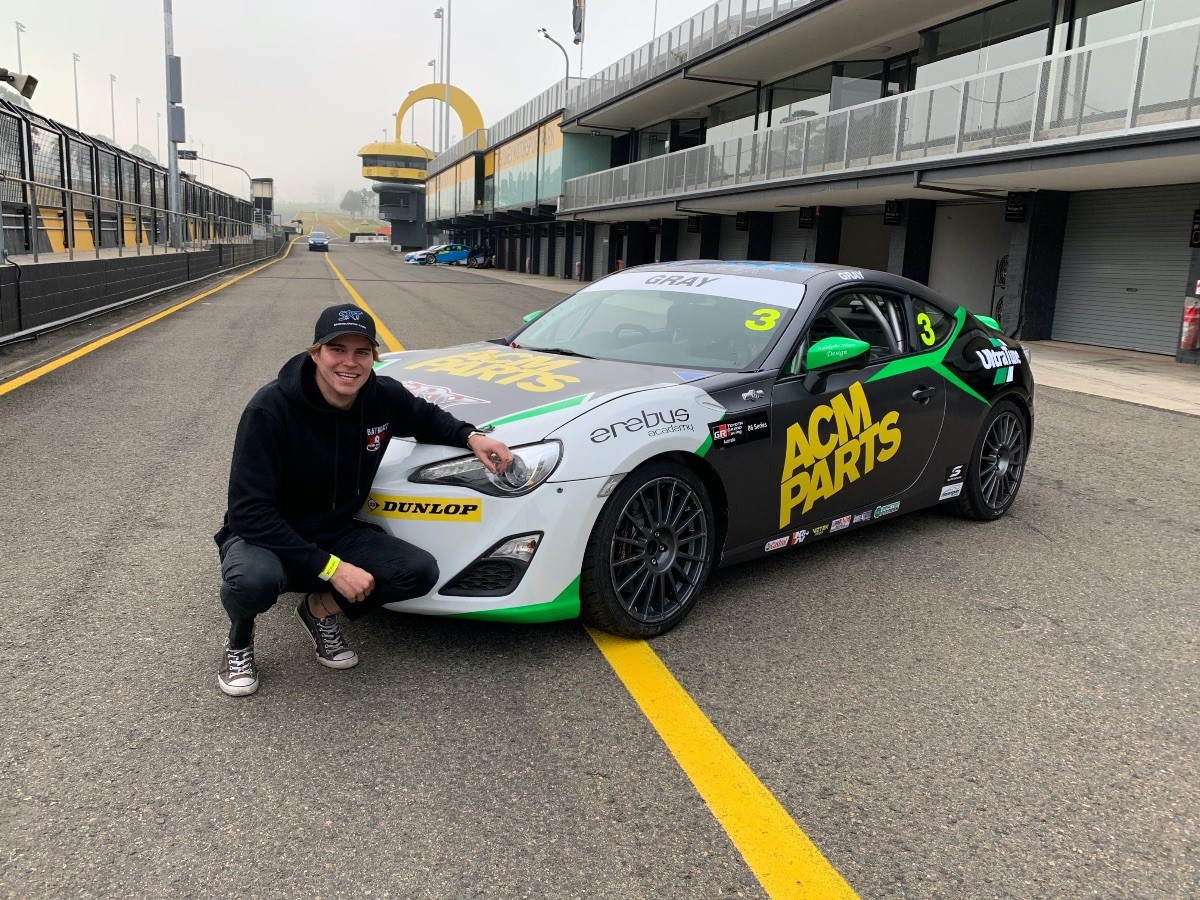 Erebus Academy recruit Harrison Gray won’t get to compete in Sydney next week, but that hasn’t stopped the young racer from unveiling his new livery as he takes his Toyota 86 for a run at Sydney Motorsport Park today.

The 18-year-old from Rouse Hill was all set to debut in the 2020 Toyota Gazoo Racing Australia 86 Serieswhich was penned in to start at next weekend’s Sydney SuperSprint.  Due to COVID-19, the series has been put on hold, but that hasn’t stopped the apprentice mechanic from sticking to his goals.

He has continued to work in the family business and train daily in the gym and will now get to put the car through its paces during an open test day today, ensuring he is ready to roll as soon as the series gets the green light.

“With Townsville potentially coming up in August we are out here today at SMSP putting in the laps,” Gray said.

“I’d been in the car a few times before everything stopped, so it’s good to be able to get back in and get familiar with it again. Just getting some seat time, seeing how the car handles and getting in as much time as we can today is the aim.

“Each time I step into my Sieders Racing Toyota 86 series car I am developing and becoming more familiar. My eyes are forward and I am ready to go.”

Carrying the Erebus Academy logo on his car for the Toyota 86 season, Gray, who has previously raced Karts before progressing to production cars attended the Toyota 86 tryouts day run by the Academy at Norwell last year. He impressed the team and said the support of the Academy was integral to his career development.

“I am so grateful to be a part of the Erebus family and cannot wait to get the ball rolling on the 86 series.

“Despite the curve balls we’ve been thrown during this crazy time I have been personally persisting with my training and preparation behind the scenes, so that when it is finally time to go green, I am as sharp as I can be.”

Erebus Motorsport’s CEO Barry Ryan was full of praise for Gray’s attitude and also hopes the series gets the nod to go ahead at Townsville.

“Harrison is showing that he is committed no matter what is thrown at him and that is exactly the attitude and positivity we expect from all of our drivers, from the Academy through to Supercars,” Ryan said.

“If he keeps up with his training and focus there is no doubt it will benefit him. He was selected to be a part of the Academy program for traits like that and his obvious driving ability, so hopefully he gets to start at Townsville but if not, it’s a good test of resilience and determination and a racers ability to handle the hurdles as well as the successes.’’