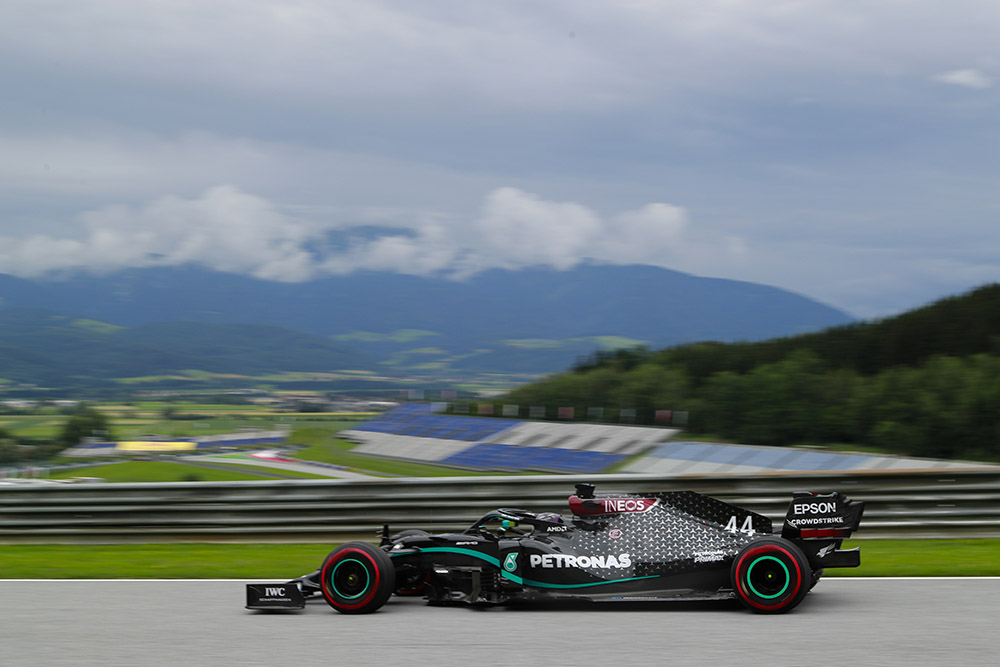 Formula One made their long awaited competitive debut for 2020 at the Red Bull Ring for the Austrian Grand Prix. After 126 days Formula One was ready to go!

Mercedes came under close scrutiny with the Dual Access Steering System (DAS) in operation on both cars. Despite Mercedes discussions with the FIA well in advance of the Formula One test, it drew the attention of Red Bull’s Christian Horner, who lodged a protest. Horner had earlier admitted that Red Bull had been developing their own DAS system and may have some insight into the potential of the innovation. A steward’s ruling dismissed Red Bull’s protest in the early hours of Saturday morning.

In the meantime Hamilton and Bottas led a Mercedes 1-2 in the now predominately black Mercedes, which bears some resemblance to the 1993 Sauber Mercedes C12.

The grid roared into life for the start of Free Practice 1 as Carlos Sainz claimed the honour of first on track, leaving a garage that resembled more of an operating theatre than a Formula One team. Race personnel throughout the precinct wore surgical masks and face shields, while hand sanitisers and social distancing signs held positions of prominence.

Sergio Perez was the first to strike problems on track as wafts of smoke billowed from the rear of the Racing Point. Diagnosed as a minor oil leak, Perez was quickly back on track and held the fastest time during the middle stage of the session. The McLaren of Sainz and Lando Norris were also fast as many of the fancied runners stayed in the garage as light spots of rain fell on the circuit.

Daniel Ricciardo stormed into the top three on medium tyres as the session moved towards the final fifteen minutes. Fellow Renault driver Esteban Ocon had a section of the side barge board break away from the car as he entered the main straight and spent the final minutes on the sideline as the team investigated the cause.

Lewis Hamilton led Valtteri Bottas in a Mercedes 1-2 at the head of the timesheets, with both drivers using the Dual Access Steering System (DAS) on the newly liveried cars.

Max Verstappen switched to the softer tyres for his final runs and was fortunate to keep the engine running on his Red Bull after catching too much of a damp curve and spinning his car. He recovered and went on to record the third fastest time of the session. Carlos Sainz, Sergio Perez and Alex Albon completed the top 6, all on the soft Pirelli Tyre.

Daniel Ricciardo was 7th and the best of the drivers to run on the medium compound tyre. Ferrari also ran mediums with Charles Le Clerc 10th and Sebastian Vettel 12th.

In addition to Verstappen, Daniil Kvyat spun his AlphaTauri at the entry to the pit straight, which forced George Russell to take avoiding action in his Williams.

Romain Grosjean completed two laps in the dying seconds of the session after a brake fluid pressure issue left him stranded in the garage as the Haas crew searched to rectify the problem.

Lewis Hamilton topped the second practice session in a time of 1m04.304s just under  2/10ths faster than teammate Bottas. There was some concerns in the Mercedes camp when Bottas encountered gear selection problems which ended his session with ten minutes remaining.

Sergio Perez finished with the third fastest time, albeit more than 6/10ths of a second in arrears of the Mercedes duo. Dubbed the Pink Mercedes, the Racing Point RP20 showed genuine pace and some visual similarities to the factory cars.

“It’s been an interesting day,” Perez exclaimed. “Everything is really close out there, especially on such a short track. The car feels good and I’m happy. In the factory, the team has done a tremendous job and we have a car underneath us that is working well. There’s still a lot of work to do – tonight and tomorrow morning – but we are in decent shape. The margins are extremely close, so it’s going to be really important to put together some really tidy laps in qualifying tomorrow.”

Perez headed a trio of drivers separated by little more than 1/100th of a second. Sebastian Vettel outshone teammate Charles Leclerc by 3/10ths of a second to grab fourth, with Daniel Ricciardo just a shadow behind. Lando Norris, Lance Stroll, Max Verstappen, Charles Leclerc and Carlos Sainz completed the top 10.

“It feels good to be back in the car, but on the other hand it’s not a great day for us,” said Charles Leclerc. “Probably even worse than we expected. Lots of cars are very close which is exciting to see on one hand, but on the other hand we would like to be fighting a bit more up in the standings, so we need to work quite hard for tomorrow and we’ll see how it goes.”

Verstappen was caught out during both sessions with off track excursions, the second damaged the front wing of his Red Bull. Daniil Kyvat also had moments in both sessions aboard the AlphaTauri, while Nicholas Latifi also ran wide in what was quite a baptism of fire in his first Formula One Grand Prix weekend.

Daniel Ricciardo recorded strong results in both practice sessions as Renault gained data for long and short term race simulations. It was a welcome change after he dramas and mechanical issues that plagued his first year at Renault. There may well have been some relief for the Australian to see the McLaren so close to his time, given his move to British team in 2021.

“Firstly, it’s really nice to get back into it,” Daniel Ricciardo said. “After Australia, I think we were all a bit nervous if we were going to be here, so it’s great to be out there again. The car felt good straight away and we carried some good momentum through the day. Our long run pace gives us something to work on, while the low fuel pace looked decent, so I’m pretty happy with that. Taking the timing board out of it, the car feels like it’s progressed, so it’s positive feelings and I’m looking forward to qualifying.”

For Lewis Hamilton, the result was perhaps a welcome relief after the extended lockdown for Formula One, even if it was expected.

“It’s great to be back. It’s been a long time coming. The new car obviously feels different than the 2018 car we got to test at Silverstone a few weeks ago, but I think we have also been able to continue to improve the car compared to last year, so that’s a big positive. The track was a little bit greasy and while the grip will pick up, it feels like the track only improved a very small amount. It was looking good out there today, but you can never take too much from practice. You never know what power and fuel other teams are running. So we will take today’s result with a pinch of salt, try and improve the car tonight and come back for the fight tomorrow.”