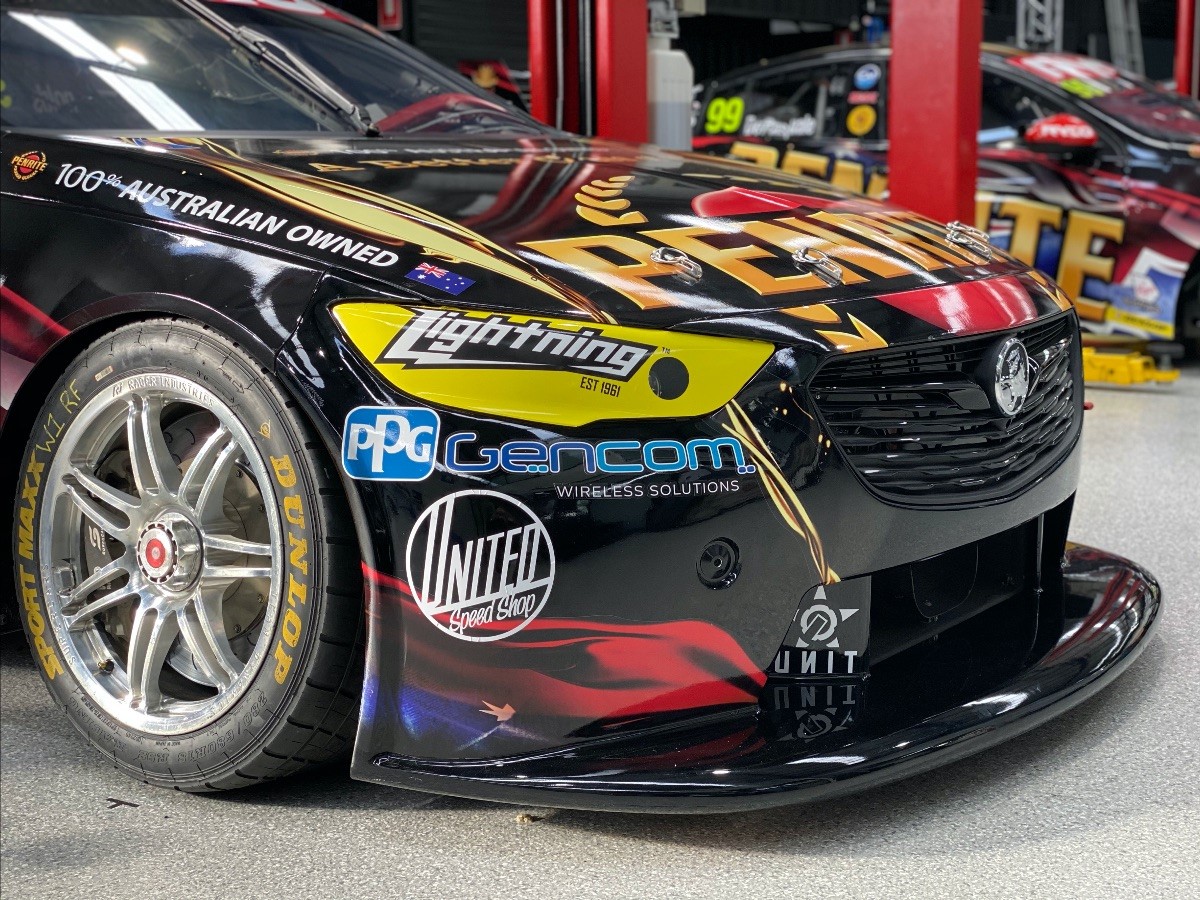 Penrite Racing has revealed an updated livery, with Australian-owned Lightning Products and United Speed Shop taking pride of place on the team’s Holden’s when racing resumes at Sydney Motorsport Park this weekend.

Lightning Products is a fast-growing acquisition of the team’s major sponsor Penrite Oil.

Lightning is a leading Australian manufacturer of hand care, cleaners and degreasers and will replace Penrite’s branding on the headlights of both cars for the Sydney SuperSprint.

Already established in the automotive space as an industry leader, Lightning’s acquisition further strengthens Penrite’s commitment to Australian manufacturing and local jobs while further enhances its strong relationship with the team.

Lightning’s Director of Product Innovation, Nigel Dymond said that the addition of Lightning to the car liveries was especially relevant in the current pandemic climate and to highlight the diversity and necessity of such products via its relationship with Erebus Motorsport made perfect sense.

“With the onset of coronavirus, Lightning’s focus on cleaners, particularly hand sanitisers was an easy decision, so we opted to replace the Penrite logo on the headlights with the Lightning logo,” he said.

“We are a proud company and Australian manufacturing is very important to us. Our management team have an average 15+ years’ experience in the business and we strive to continue to offer the best products for efficiency and environmental integrity, with an added focus on customer service too.

“We are fully invested in Australian brands, and growing them internationally, so it’s great to be able to secure another iconic brand and keep its workers in Australia and showcase the products on the Penrite Racing Supercars.”

Likewise, Newcastle-based and owned parts and accessories business, United Speed Shop, will appear on the front bumpers of both cars as its introduction to a longer-term partnership with the team.

The United Speed Shop team prides itself on its ability to create bespoke componentry to fulfil its customers needs, centred around its core values of excellent customer service, outstanding quality and a flair for great design.

Owner Ryan Carter, a passionate hot-rodder himself started the business in 2015 and after an initial approach from a team member for a personal car request the relationship started and will now see United Speed Shop displayed on the cars.

“We have a custom car shop and manufacture a lot of components for early Holdens and Ford and James White from the team contacted us regarding front components for his Holden Panel Van,” Carter said.

“We got talking about manufacturing different pieces and after a good chat we realized that Erebus had the capability to produce some of the stuff we need that we had previously had to rely on the US and the UK for, despite most of our stuff being made in Australia.

“We are now having those parts manufactured here so it’s two Aussie business’ joining forces.

“For someone who grew up as a kid idolizing Brock and racing for 40 odd years, to see my logo on a Supercar will be really cool. We can’t wait for this weekend and with future plans already in motion, we’re really looking forward to working more together in the future.”

Erebus Motorsport CEO Barry Ryan said the team was proud to continue to foster its great relationship with Penrite and to build new relationships in such a challenging climate.

“It’s no secret that here and worldwide many companies and industries are doing it tough right now, so to have the support of Penrite and the trust to build and diversify where we can, shows the commitment and the common goal we all have to look to the future and support each other.

“To have United Speed Shop come on board and work with us in a mutually beneficial partnership right now is really pleasing and we look forward to working together into the future.’’

Both Penrite Racing Commodore’s will be on track from 11:00am local time tomorrow for practice, ahead of a three-part qualifying and race.

All the action will be broadcast on Saturday June 27 and Sunday June 28 from 11am on Fox Sports and Kayo, with highlights on Saturday on BOLD at 10:20pm and Sunday on TEN HD at 4:00pm. All times are AEST.