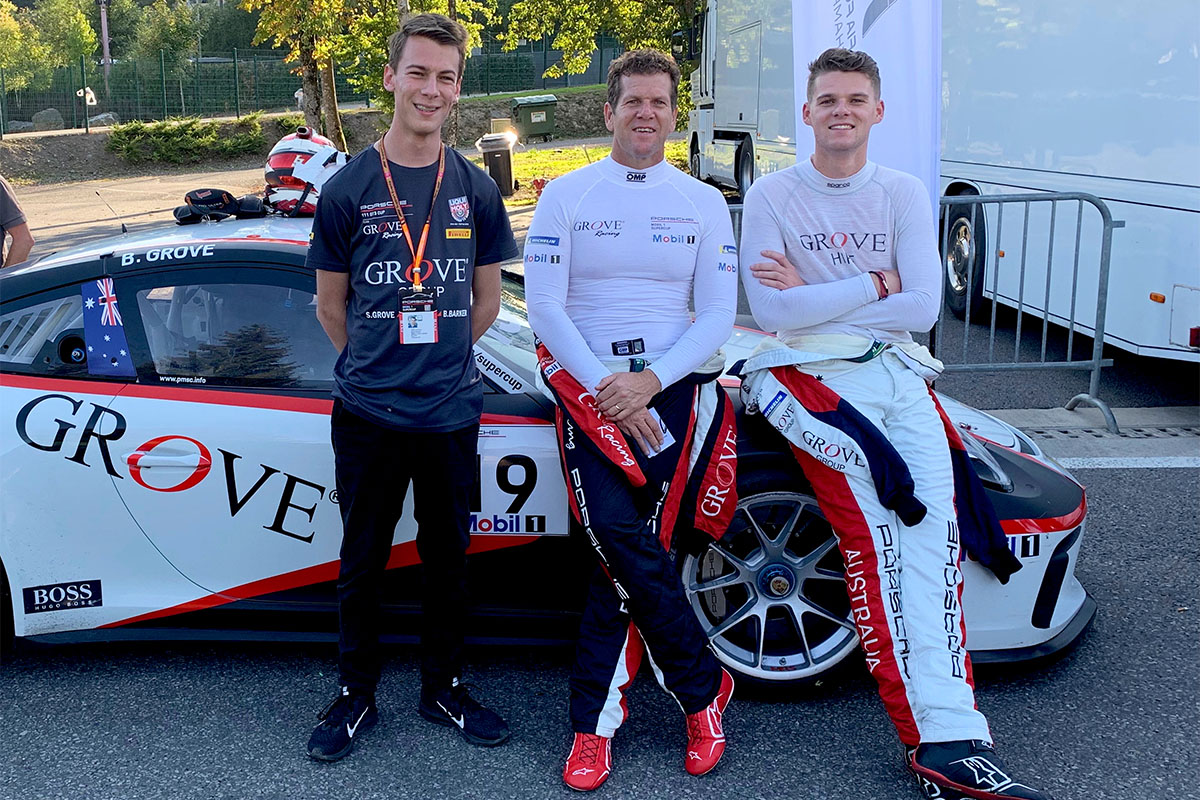 There are times in life where you go: “far out, this is cool” or “I have the best job in the world” — and for me, last weekend was both of those, and so much more.

Hi, I’m Slade Perrins, and yes, I do have the best job in the world.

Some may not know me, and some will recognise every word I type. I have been with Grove Racing for more than three years and love every single day just as much as the next.

I don’t change tyres or work on car set-up; I don’t tell the drivers to go faster over the radio while they are on track — although I’m always happy to help with any of these when needed!

My role is media manager at Grove Racing. Such a role entails a number of responsibilities, and one of the most important, just like racing drivers, is accuracy. I also have a responsibility to inform you — the fans — on how the team is doing.

I look after Grove Racing’s numerous social media platforms, including Facebook, Instagram, and Twitter, posting content over each race weekend and also regularly during the week. That’s right, all those posts you see — that’s me!

Furthermore, I write and distribute the team’s press releases and announcements, produce videos, coordinate with journalists on stories, and the most exciting of all, cheer on Stephen and Brenton like there is no tomorrow, wherever they are racing in the world and at whatever hour of the day or night.

Since I joined the team, I have been very privileged to be a part of Grove Racing’s incredible success over the last few years.

Some real highlights include Stephen’s outstanding third Carrera Cup Australia Pro-Am championship in 2018, Brenton’s first podium in the Dunlop Super2 Series at Townsville in July and father and son Groves winning the 2019 Bathurst 12 Hour in Class B with Ben Barker.

Recently, I got a once-in-a-lifetime opportunity to do something very special with the team and add to my experiences.

I was lucky enough to join the Groves to provide on-the-ground coverage of the Porsche Mobil 1 Supercup round at the iconic Spa-Francorchamps circuit in Belgium, Europe at the Belgian Grand Prix.

It was a significant event for Grove Racing, with Brenton making his debut in the pinnacle of Porsche one-make racing, meaning that Grove Snr and Grove Jnr became only the second-ever father and son to compete in the series together.

When we arrived on Thursday, I was immensely excited. Spa-Francorchamps is hands down my favourite race track in the world and I have been watching car racing there for years on TV — and now, I was right there. In the thick of it.

As if that wasn’t cool enough, I was very fortunate to be able to join Team Australia on a track walk of Spa on Thursday evening. Yes, it was 7km, but by far one of the coolest things I have ever done in my life was walking Eau Rouge and Raidillon. It’s the kind of stuff dreams are made of.

You are always told that the steepness of that section of road is a lot greater than you think, but what took me by surprise was how blind the rise and corner was. It gave me a new respect for Spa-Francorchamps as a circuit and also new respect for those that are brave enough to take it on.

Just being present at Spa with the team was breathtaking; however, one part stood out.

Each of the Porsche Supercup teams are allowed to use the Formula 1 pit wall of the team which they box in front of in pit lane, and amazingly, our pits were out front of Red Bull Racing. So for each on-track session, I joined the Team Australia engineers on the Red Bull pit wall and got to sit in Christian Horner’s chair.

Grove Racing’s own Peter Osborne, who engineered Brenton with MRS GT Racing, was on the Haas F1 Team pit wall and jokingly channeled his inner-Guenther Steiner.

Across the weekend, I met some incredible people, not only within Herbeth Motorsport, who run the Team Australia banner but also among the Porsche Mobil 1 Supercup paddock.

What I enjoyed the most about that was how friendly every single person was, and being a part of the paddock and team gave me an amazing opportunity to understand the sport better — and learn I did.

Motorsport is tough. It has absolutely no mercy. It’s not all champagne and celebrations — it’s great when it is, but it’s not always like that.

A good example of that is Stephen’s weekend at Spa. He admitted himself it was a tough weekend and he did not get the results he wanted, and you could tell he was disappointed after he came fourth in Pro-Am in Sunday’s race.

He wants to win; any driver wants to win, but at the level Porsche Supercup is you have got to work as hard as any other sport to achieve success. So when you have a tough weekend, it weighs on your mind because racing drivers always want to do better.

For Stephen, he finds that after a less than ideal round, he is all the more hungry to do better and he uses that energy to improve at the next event.

Racing drivers are always working hard and can’t stop thinking about how to go faster. I remember at Spa, Stephen and Brenton were both up before sunrise on Saturday morning going over data and discussing lines with each other.

The one thing Brenton said which amazed me was “If I find a tenth of a second each corner, that’s two seconds faster per lap”. And he did. In Saturday’s Qualifying session he went almost three seconds faster than his practice time.

He was ecstatic with that, but still eager to find more time.

Results sheets never ever tell the full story either. If you look at Brenton’s race result — 20th outright — that says nothing compared to reality. He drove as hard as he’s ever driven before and passed four cars in one of the most competitive fields in the world, but still only finished in the top 20.

The same goes for Stephen and his 29th place finish outright. These are the sorts of things racing drivers are constantly thinking about, and the media plays a major part in it as well.

What goes on in the media really matters to teams and drivers, they all monitor it closely, a lot closer than I ever thought; quite often what is being said about them impacts the way they think on a race weekend.

It puts racing drivers under a lot of pressure to perform because they are always being watched and if they have one bad weekend, all of a sudden they are being talked about.

If there’s one thing I have noticed working with drivers is that sometimes people tend to forget they are also human and expect them to be like robots.

They are not robots, but they sure as hell are machines that take huge risks driving racecars unfathomably fast.

Motorsport is a harsh world. And at the end of the day, drivers race because they love the sport. I can wholeheartedly say that Stephen and Brenton Grove love motorsport more than anyone else I have met and they continue to love and support the racing community through the highs and lows.

I am lucky enough to be able to follow my passion with Grove Racing and see first-hand all of the emotions behind the scenes that many don’t get to see. That is why I have the best job in the world.