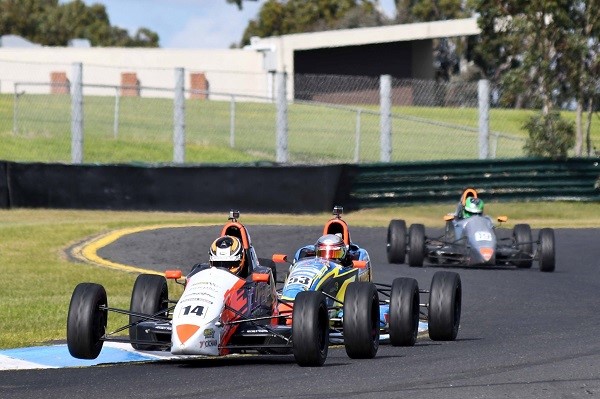 The Australian Formula Ford Championship may be heading to Lachlan Mineeff’s home track, Wakefield Park, this weekend, but the Southern Highlands racer is talking down the potential advantages.

Mineeff and his CHE Racing Team have tested at the Goulburn circuit in the lead-up to this weekend’s penultimate round of the season. However, other teams have also completed test days at the venue, prompting Mineeff to be cautiously optimistic rather than over-confident.

“We did a couple of test days, but our main rivals did as well, so we don’t really have any advantages in terms of preparation,” he said.

“In saying that, both test days went really well. We completed a lot of laps, we were able to make plenty of adjustments, and we were able to get a good read on our setup changes and how they affected the handling of my Purple Sector Formula Ford.

“Off the back of our wins in the last two rounds, there’s a lot of confidence in the team at the moment, and we feel we have a package to fight at the front of the field once again.”

While on-track preparations have been going smoothly, Mineeff has also spent time enhancing the off-track aspects of his racing program. Since the last round at Sandown, he has introduced a micro-sponsor program, allowing interested individuals or businesses to enjoy a personalised involvement with the team for a modest investment.

Micro-sponsorship is available for as little as $100, with all micro-sponsors’ names listed on the car. Higher-level packages are also available, and include benefits such as tickets to race meetings, and a hot lap in Mineeff’s Bathurst 6 Hour Toyota 86 production car.

“I only announced the micro-sponsorship program a couple of weeks ago, and I’m stoked with the response,” he said.

“I already have a number of people and businesses involved, which is awesome!”

This weekend’s Formula Ford round will follow the standard format, with practice on Friday, qualifying and Race 1 on Saturday, and Races 2 and 3 on Sunday.