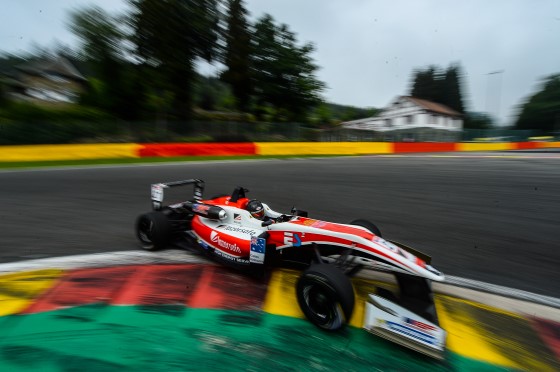 Today was Friday official practice at Spa for Round 3 of the Euroformula Open Championship. This was my first ever time at this famous circuit, and with 7km and 19 turns to learn in just three 30 min runs before Qualifying tomorrow morning, it was critical that I got myself on the pace as quickly as possible.

Rain was forecast, but the weather was kind with the track staying dry all day. In Practice 1, I was very excited to get out on to the track, and experience the amazing Eau Rouge and Radillon corners for the first time.

The run down the hill in to Eau Rouge is much steeper than it looks on television, and then the gradient up as you turn into the corner is extremely steep. The feeling as you hit that rise up is really very strange with the G Forces compressing you straight down into the seat. As you fly up Eau Rouge, you lose sight of the track momentarily because of the steepness, and you actually don’t see your final apex until you are pretty much on it. Its an amazing feeling, and whilst that sensation is there all the time, you get used to it and push as hard as you can through the corners. Practice 1 I ended up 13th of the 15 drivers on the timesheets.

For Practice 2 we put in place a few learnings that I had run through with my Race Engineer Tom Toovey, and took around a second off my lap times to finish 12th on the sheets, and pleasingly only a second out of the top 5. As this is an official practice session, only Chamionship allocated tyres can be used. In both of these runs we used tyres which were reasonably good, but had the most mileage on them of the ones we planned to use.

For the final practice session we used two sets of used tyres which were better, and through applying further areas to make gains we had identified, I managed to drop my lap times by over another second, to finish the final session and the day 7th on the timesheets. I was extremely pleased with this given my lack of experience at this difficult circuit. It has been a very positive start to the weekend, and the team have been fantastic giving me the perfect car to drive. I am very much looking forward to tomorrow.