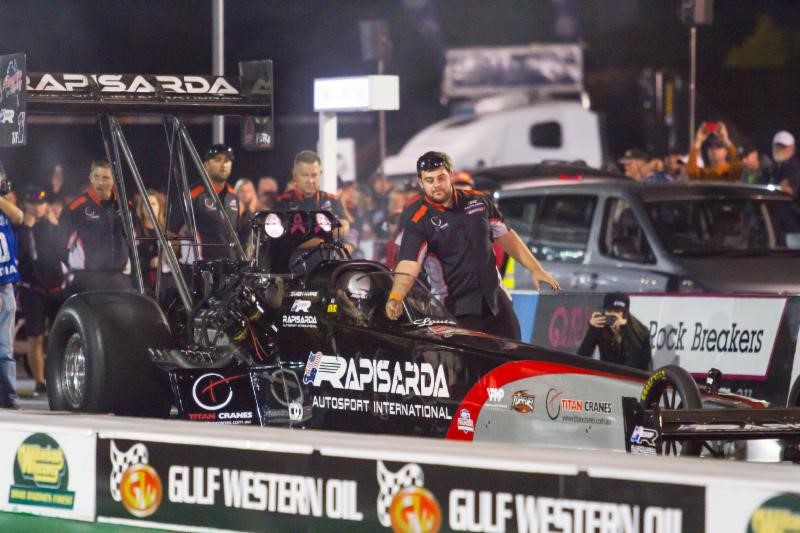 Building and maintaining just a single Top Fuel team is among the most demanding challenges in the sport of drag racing, but Sydney-based Rapisarda Autosport International will take it to the next level at the 2018 Gulf Western Oil Winternationals this weekend when they field three of the ground shaking dragsters.

Australia’s Damien Harris and Wayne Newby, plus Californian Ashley Sanford, make up the nitro trio who have been charged with stopping a devastating three-event winning streak by Queensland’s own Top Fuel rookie Kelly Bettes.

Rapisarda Autosport International’s Santo Rapisarda Jnr is the crew chief for Harris, who currently sits second in the 400 Thunder Top Fuel Championship. After setting Australia’s quickest ever Top Fuel pass at last year’s Gulf Western Oil Winternationals, Rapisarda would love to repeat this year at Willowbank Raceway while maintaining the consistency needed to win the championship.

“In my opinion the Gulf Western Oil Winternationals is the most prestigious event in Australian drag racing,” he said. “ The car counts from all classes are always stellar, the cool crisp conditions and the experienced track preparation crew at Willowbank always allow for big runs and personal bests.

“Championship battles being decided at the event just make for a great feel in the atmosphere – it’s the most exciting event on our calendar. We have been lucky enough to win it many times with different drivers.

“The big goal for myself and the Harris team will be to put up consistent, fast runs and at the end of the weekend we may end up with a championship.”

The commitment of Rapisarda Autosport International to Top Fuel in Australia has meant a season of hard work, not just in the enormous inventory required to keep the 10,000 horsepower dragsters on the race track but also in the people to run them.

“I’ll tell you now, it’s no walk in the park,” he said. “It’s a lot of prep work between races, but good performances make up for the hours in the shop.

“One of the hardest parts of Top Fuel racing is finding good, reliable people who can work together.

We have managed this year with the third car and I’d like to believe it hasn’t taken away from the primary cars.”

The 51st running of the Gulf Western Oil Winternationals could see some of the quickest runs ever in the category, with most teams having one eye on the first 3.7 second clocking in Australia under the new 1000 feet format.

“With the winter conditions and strong car counts meaning good rubber is going down on the track, there is no doubt you will see some big runs from all the Top Fuel cars,” Rapisarda said. “A 3.7 second 1000 foot run would be a great reward for the fans and an RAI car is definitely capable.

“(Lamattina Top Fuel Racing crew chief) Aaron Hambridge and the whole LTFR team have found their way with their new car and Kelly Bettes has shown that she can drive – their car has run 3.6 seconds over 1000 feet in the USA.

“But with drag racing anybody has a shot at taking home the win so you can’t take anyone lightly.”

As far as his driver goes, Rapisarda says Damien Harris might seem mild mannered by appearances, but turns into a different man in a racing suit.

“If you saw Damien in his work clothes and told me that he drives a Top Fuel dragster I would laugh at you. But when he pulls that racing gear on he gets that real race car driver swagger happening,” he said.

“We brought out a new car at the start of the season, a car that he fits much better into and he has been doing his job at the steering wheel. A lot of the drivers in Australia do great considering that they sometimes don’t get to drive a car for months at a time, unlike the drivers in the USA.

“Damien and I have a great relationship and try and do the best job for each other. I would love nothing more than to deliver another championship for him in Queensland.”

The Rapisarda Autosport International stable will take on not just Bettes but also a rejuvenated ‘Queen of Speed’ Rachelle Splatt, who was recently part of the first all-female final round in Australian Top Fuel history, and Anthony Begley – making the long trek from Western Australia.

For more information about the event, head to www.willowbankraceway.com.au