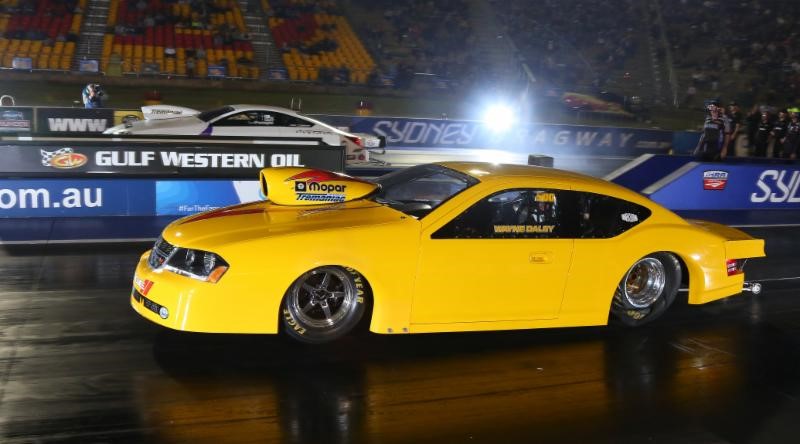 Queensland is proving to be the dominant State in Pro Stock competition right now but a seven event-long stranglehold on the category by one family has been broken, throwing the Gulf Western Oil Winternationals into unpredictable territory.

Wayne Daley’s Diamond T Toolboxes Dodge Avenger was the star of the recent Gulf Western Oil Nitro Thunder event at Sydney Dragway, where he set the quickest Pro Stock time of the season so far at 6.90 seconds and took down championship leader Aaron Tremayne.

The final presented a unique scenario as Tremayne is also the engine builder for the Daley team.

“It has been said your engine builder never gives you the same power he has when racing in the same class,” Daley said. “But the performance of our engine proves Tremaniac Racing are dedicated to our engine program and gave us 100% of what they know.

“Our engine was recently updated by Tremaniac Racing and with changes to the weight distribution and suspension settings the car has shown improvements in the early part of the track which was responsible for the quick runs. ”

By winning the event, Daley brought an end to seven straight wins for the Tremayne brothers, Aaron and Tyronne. It marked a long awaited turn of fortune for Daley who has endured a season he would rather forget. He missed the first event of the season in Sydney due to work commitments and then sideswiped the safety barriers at the second round of the championship in Adelaide, where the team were also battling fuel and electrical gremlins.

Now all that remains for the 2017/18 400 Thunder Pro Stock Championship is the Gulf Western Oil Winternationals at Willowbank Raceway, an event Daley has yet to win. Arguably this year presents his best opportunity yet to win Australia’s biggest drag racing event.

“The Gulf Western Oil Winternationals is the one event of the year we definitely don’t want to miss,” he said. “It attracts the largest field of Pro Stock cars all season and makes for great competition.

“The 2016 Winternationals was the best result for us, where we were runner up to Aaron after a two year break from competition. We were looking good last year after some mid 6.9 second runs in testing but unfortunately the weather had the final say.

Fourteen teams in total have entered for the Pro Stock field and Daley believes the close nature of the competition makes it is difficult to pick his toughest competition. He said he will be working on improving his gear shifting techniques in order to gain any edge he can.

“Based on previous performance you would say Aaron Tremayne is the one to beat but the entry list is full of strong competition, it is one of those fields where anyone could win,” he said.

Pro Stock at the Gulf Western Oils Winternationals includes racers from as far afield as Western Australia attempting to bring home their slice of glory.

The Gulf Western Oil Winternationals run from June 7 to 10 at Willowbank Raceway, with over 500 teams set to compete in Australia’s biggest drag racing events.