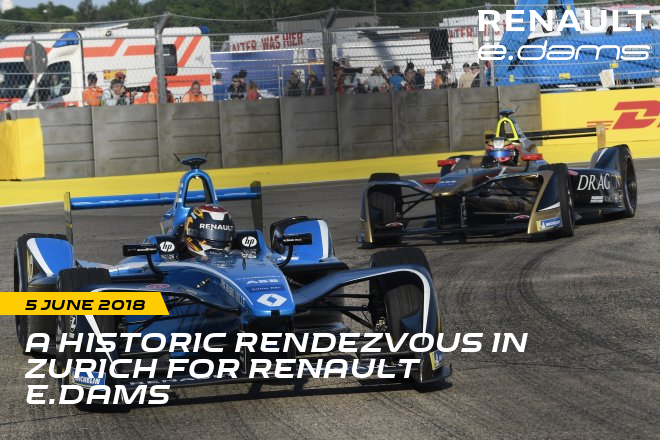 For the final round of the European tour, the FIA Formula E Championship is preparing to write a new chapter in motorsport history with the first circuit race held in Switzerland since 1954. Renault e.dams drivers, Sébastien Buemi and Nicolas Prost are determined to make their mark this Sunday.

Once again, the first 100% electric category is creating a buzz! For round 10 of season 4, the field will head to country’s largest city Zurich for the first race to be contested on Swiss soil in more than 60 years.

While everyone will start on level footing, there’s little doubt that Sébastien Buemi’s motivation will be greater because he will, for the first time in his career, have the opportunity to race on home soil and in front of his fellow Swiss citizens. Winner of the first ePrixs organised in Punta del Este, Monaco, London, Hong Kong and Marrakech, Séb will yet again aim for the top step of the podium to solidify even more his place in Formula E history.

It will almost be a home race for Swiss resident Nicolas Prost. The Frenchman is determined to find his way back into the points and contribute to the Renault e.dams comeback in an extremely tight general classification as the final sprint comes to the boil.

As the first international circuit in Switzerland for the past several decades, Zurich offers a postcard setting with the lake and Alps as a backdrop. From the port d’Enge, the track will lead the field to the city-centre and business district before returning to the port promenade thanks to two straights linked by a hairpin. The race will start Sunday at 6pm.

Sébastien Buemi: “It is going to be incredible to race in the streets of Zurich. I am really proud to be a part of it! I know the city very well and I paid a visit to the neighbourhood where the track is set up. The layout seems quite simple with a lot of 90° corners, but I am sure that it will be a stiff challenge to get on pace. There is a long straight and a chicane that should offer overtaking opportunities. When I was growing up, motor racing was banned in Switzerland. I am going to try to make the most of this event!”

Nicolas Prost: “I am French, but I have a Swiss passport. So it will be another home round for me! To race in Paris is something quite special, but after three years we’ve gotten used to it. I am looking forward to discovering this circuit. I don’t know Zurich very well, but it is a very lovely city where there is a lot going on. People have to understand just how much work went into bringing motor racing back to Switzerland! I want to thank everyone who made this possible and I hope we can put on a great show Sunday.”

Groupe Renault in Switzerland
Switzerland is the third largest market for electric vehicles in Europe. Since the start of the year, Renault has attained a 17.8% market share and its Z.E. range is the EV leader. Launched in 2012 and elected “the greenest car of the year” by a Swiss panel, the Renault ZOE is the third best-selling model in a market dominated by the premium brands. Meanwhile, several cities, businesses, airports and car-sharing services have put their trust in the Renault emission-free vehicles for their fleets.

MEDIA RELEASE/Formula E Image: supplied - All you need to know as Season 7 of…